The process of making a diamond begins in the earth’s upper mantle, which is a hotbed of volcanic activity. The magma rises at incredible speeds and reaches the crust. It cools quickly and combines with carbon atoms in close proximity to form a diamond structure. Many things happen to the diamond during its formation, from deep seated volcanic eruptions to the melting and cooling of volcanic material. 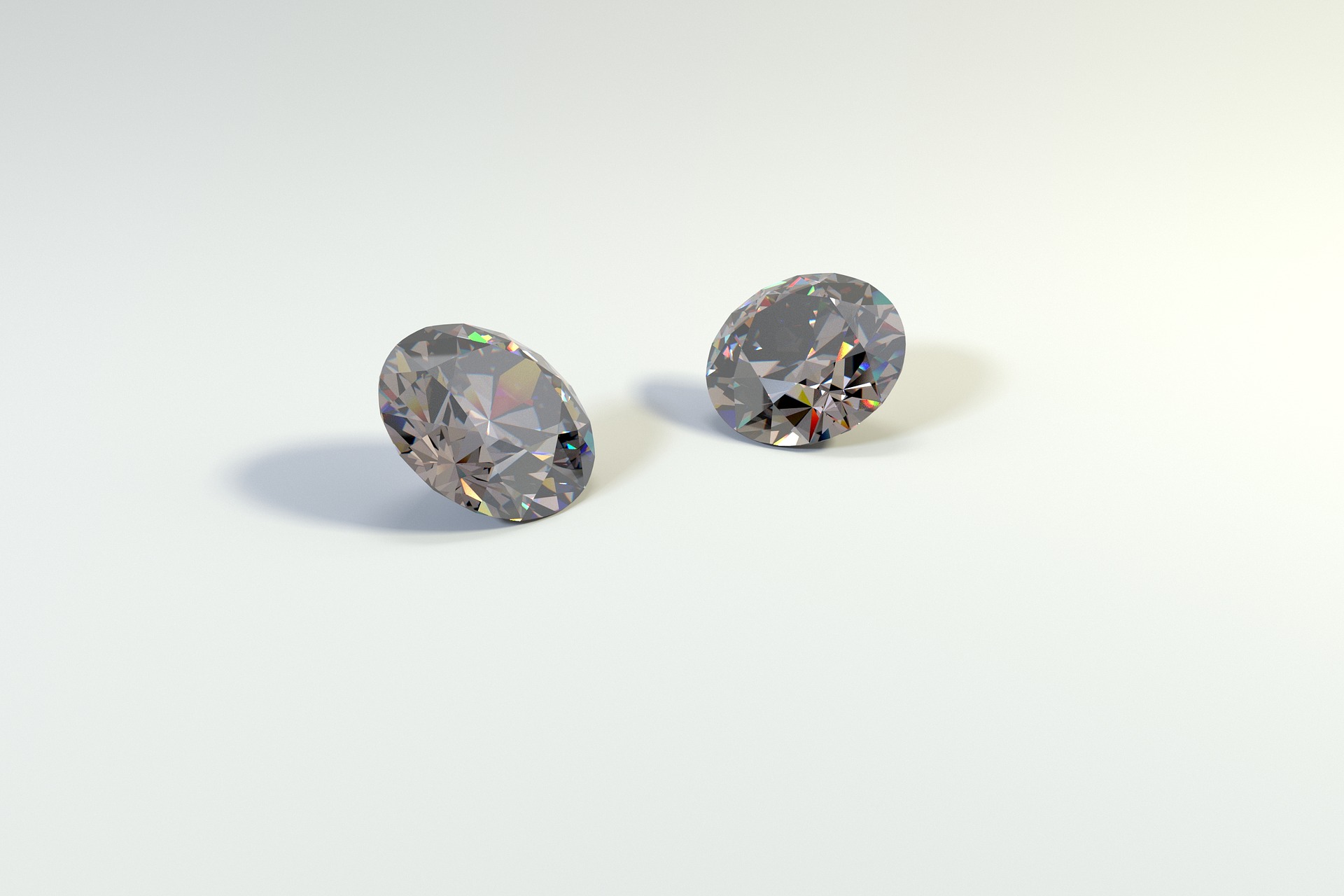 Is There A  Definite Time Period For Diamond To Be Formed ?

The process of making a diamond is not continuous. The creation of a diamond can start and stop for many reasons. In some cases, a diamond can form, stop growing, and then reappear. There are also no definite methods for creating synthetic diamonds. For example, some stones are grown in labs, but they still are not naturally occurring. This makes them an excellent choice for industrial purposes.

Nearly all of the diamonds found in mines and consequently used in engagement rings, according to geologists, were generated in the upper mantle and transported to the earth’s surface by a deep-source volcanic eruption. The kimberlite and lamproite pipes that gemstones are discovered in are thought to have been formed by volcanic explosions.

According to Geology.com, these kimberlite pipes and their connection to diamond mining are as follows: “The majority of these pipes are either devoid of diamonds or contain such a small amount of diamond that they are of no commercial value. When these pipes contain enough diamonds for commercial mining, open-pit and underground mines are built. Some of these pipelines have also corroded and degraded diamonds.”

The second process of diamond production happens when tectonic plates drive rocks into “subduction zones,” which geologists refer to as “subduction zones,” and subsequently return to the surface with small diamonds. Small rough diamonds generated in subduction zones develop at temperatures as low as 390 degrees Fahrenheit (yep, that’s low compared to the usual 2,000 degrees) about 50 miles below the earth’s crust.

Earth has been impacted by a few asteroids at various times during its history (just ask the dinosaurs). When an asteroid collides with the earth, it creates extreme pressure and temperatures, which are ideal for diamond formation. This process may be seen at various asteroid impact sites throughout the world, including the Popigai Crater in Siberia, Russia, and the Meteor Crater in Arizona, which are two of the most popular.

There aren’t only little green men drifting about in space. Some meteorites have been found to contain substantial levels of nanodiamonds, according to NASA experts. Unfortunately, these diamonds are far too small to be used in jewellery or as industrial abrasives, but they are still a fascinating find. Furthermore, the Smithsonian discovered enormous amounts of small diamonds in the Allen Hills meteorite, adding to the growing body of evidence that space diamonds exist.

How Do Diamonds Make Their Way To The Earth’s Surface?

The diamonds we see on the surface are those that have been brought to the surface by a subterranean volcanic eruption. It’s a unique type of eruption that occurred long ago in Earth’s history and is thought to have been highly violent. Such explosions haven’t happened in a long time. They occurred during a period when the earth was hotter, which is why those eruptions were more firmly rooted.

The diamonds that had already grown in the upper mantle were then brought to the Earth’s surface by these eruptions. The diamonds are enclosed within a pile of volcanic material that formed after the eruption reached the surface and cooled.

One thing we know about any diamonds that were brought to the surface is that the process of the Kimberlite eruption bringing the diamonds from the upper mantle to the Earth’s surface had to happen very quickly, because if they traveled too long and too slowly, they would have turned into graphite along the way.

As a result, by moving swiftly, they were basically locked into the diamond structure. These eruptions, these Kimberlite pipes moving to the surface, may have been traveling at rates of 20 to 30 miles per hour once the diamonds were moved from high temperature to low temperature extremely fast—and by quickly, we mean in a matter of hours. When the gems are ready.

What Role Does Carbon Play In The Formation Of Diamonds?

Because diamonds are made of carbon, they form as carbon atoms under extreme heat and pressure, bonding together to form crystals. Under these conditions, carbon atoms will bond to each other in a particularly strong sort of bonding where each carbon atom is bonded to four other carbon atoms due to the temperature and pressure. Each carbon atom participates in four of these incredibly strong covalent bonds that form between carbon atoms, which is why a diamond is such a hard substance.

As a result, you end up with this tough substance. Again, where the carbon comes from and how quickly they develop are all unanswered mysteries, but the conditions are undeniably favorable. so that you have a bunch of carbon atoms that are close enough enough to start bonding. Other carbon atoms will attach to it as they come closer. Any crystal grows in this manner. This repeating network, this structure of carbon atoms, eventually becomes large enough to generate crystals that we can see is the result of atoms locking into place. Each of these crystals, each diamond, each one-carat diamond, represents literally billions of carbon atoms that have to lock into place in order to produce this incredibly organized crystalline structure.

You’ve probably heard that mined diamonds come from a very dark area, and we’re not referring to the ground. A one-carat mined diamond costs between 88,000 and 176,000 pounds of soil to the mining plant. Diamond mining pollution devastates sea habitats and can even produce acid rock drainage, which contaminates all living species that rely on the water supply. The diamond mining industry has a negative impact on both the environment and human rights. The sector is notorious for brutal treatment of workers, including underage labor, as well as an increased risk of health problems.

What Is The Science Behind Diamond Formation?

Let’s go a little more into the process of creating natural diamonds. Diamonds occur naturally in the earth’s mantle, where severe temperatures and pressures exist. Temperatures of at least 2000 degrees Fahrenheit and pressures of at least 725,000 pounds per square inch occur in confined zones around 100 miles or more below the earth’s surface. This is the critical temperature and pressure for the production and stability of natural diamonds. Under the intense conditions, the carbon atoms link together to form a diamond.

Volcanic eruptions deliver diamonds formed and stored in these limited zones of the deep earth to the earth’s surface. These explosions rip chunks of the mantle apart and take them away.

How Are Man-Made Diamonds Formed?

HPHT and CVD are both ways to create synthetic diamonds. These synthetic alternatives have the same chemical makeup as natural diamonds, and they are graded using the same 4 Cs. The only difference between the two methods is that they can take several years to form, whereas HPHT is quicker and more efficient than CVD. Regardless of which method you choose, the end result is the same: a sparkling, sparkly diamond.

Another way to produce a diamond is by using a chemical vapor method. This method can create a picture-perfect diamond within one day. In this process, a seed-diamond is placed in a vacuum chamber and exposed to microwaves and hydrogen rays. The gas atoms are energized, causing them to stick together and form a perfect sheet of a diamond.

What Is The HPHT Method?

The HPHT method is a way to grow diamonds from raw material. To grow a diamond, the lab technician must choose a few seeds that do not have flaws. After selecting the diamond seeds, they must put them inside a lab rough stone. In this process, the stones are heated to a high temperature of about 2,600 degrees. Once they have been heated, the process is complete.

The process of making a diamond requires a lot of heat and pressure. This process is not easy, and the diamond can take several decades. During this process, a metal catalyst dissolves carbon into a diamond seed. This process produces a diamond in a matter of days. These synthetic diamonds are generally used in industrial applications. The time it takes to make a gemstone depends on the type of chemical reaction that happens during the formation.

Do Diamonds Occur in Coal Mines?

Coal is often associated with the creation of diamonds, which is a widespread misunderstanding. Because coal is also formed of carbon, it’s easy to see why there’s a misunderstanding. It is, nonetheless, a sedimentary rock because it contains numerous other substances. Coal is made up of plant matter, fungus, and even bacteria. Coal cannot become a rough diamond due to impurities alone. It is also rarely buried to depths of more than two miles, making it highly unlikely that it was transported from the crust to such a depth. Instead, carbon trapped in the earth’s interior is most likely the source of diamonds’ carbon.

The process of forming a diamond is an art and science. It takes a combination of high temperatures and pressure to create a diamond. A diamond is the hardest substance known to man. Its shape determines the price tag and the quality of its beauty. Once formed, a diamond is a great investment. It can also last a lifetime. This is an important question to ask when making a diamond.

A diamond’s formation is not a continuous process. It can start growing and stop at various points. In some instances, the diamond can stop growing. This is a process of constant growth. During the process of making a diamond, it may even stop growing. However, scientists have no way to measure the length of time it takes a diamond to form. It is believed to take about seven million years for a diamond to fully form, making it the world’s hardest substance.