A San Francisco engineer has created a unique hi-tech ring to propose to his fiance – which lights up when he is nearby.

36 year old Ben Kokes, who works for an electronics firm, spent five months perfecting the ring before finally giving it his fiance Julie Nicolai, 35 – and said she was so excited by it she didn’t let him finish his proposal speech.

Hidden inside the ring are tiny LEDs which light up when Kokes is nearby, illuminating the stones in the titanium ring.

‘I knew I wanted to build it, but didn’t know how – I’m an engineer, so think about this kind of thing all the time,’ he said.

‘I spent a lot of time thinking about how to propose, and started to think about the ring you see today. I started work on it in January, and then finally proposed in mid-May.’

How Was This Engagement Ring Created?

Wrapped within the interior of the ring is a coil of copper, which generates a current when exposed to an alternating magnetic field.

To supply the field, Kokes built a wrist-mounted device that he could wear and easily conceal, as well as surreptitiously activate when the time came.

‘It is quite bulky, and you need to be within 3-4 inches, but I managed to hide it under my jacket, he said.

‘Several designs were considered and were rejected because of exotic material requirements, machining geometry limitations or violating the laws of physics.

‘It was a fun exercise to explore potential and unique designs, but at the end of the day, I still needed to make her something that I could present and that didn’t look like it was carved with a spoon,’ he said. 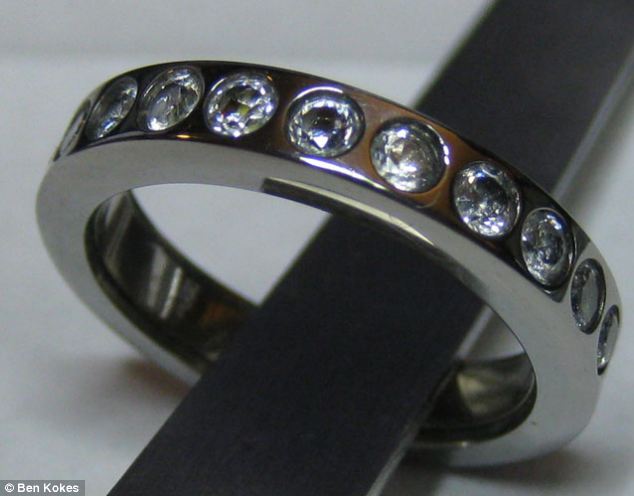 How Did He Propose With This Engagement Ring?

However, the proposal did not go according to plan.

‘We live in San Francisco, and across the bay is a hill, so I wanted to hike there at dusk, and propose. However, it was really foggy – so after hiking for an hour, we had to abandon the plan, so we can back to the city and I proposed there.’

Once the proposal finally happened, Ben said the only problem with Julie’s reaction was that it didn’t allow him to finish his speech.

‘I had a little speech prepared, and she wouldn’t let me get through it – she just started telling me how amazing it was.

‘The plan was to present the ring then get a professional ring made – but she said she wanted a permanent version of this instead, so i am building that now, as unfortunately the electronics in this version made it slightly too small for her to wear every day.’

The permanent version will become Julie’s wedding ring, he said.