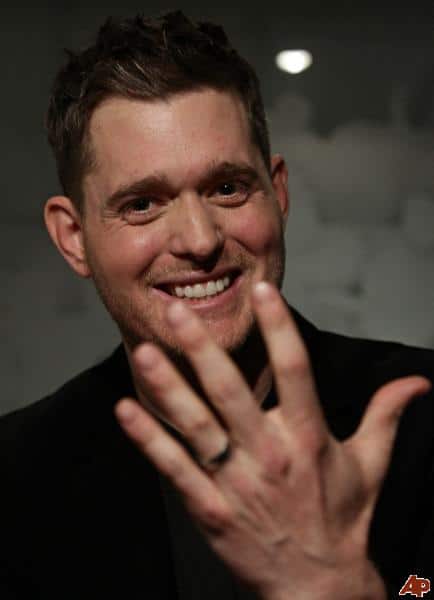 Most men you know may have never considered wearing a male engagement ring–at least not until Michael Buble started wearing one when he became engaged to Louisana Lopilto. Despite the coolness of this famous couple, men are still leery of  the idea and will either evolve with the style (if it ever becomes common and stylish) or never take off unless it’s a cultural tradition. No doubt the jewelry industry is capitalizing on the Canadian singer’s decision to wear one, with the hopes the trend will catch in N. America.

Men’s Engagement Rings: Where does the idea come from?

The idea of a male engagement ring (man-gagement ring) stems from Brazil and Argentina. In these cultures, it is common to have a man wear a wedding ring on the right hand while engaged and then once married, switch it to the left hand.

Naturally, it’s expected that a couple will exchange wedding rings while they exchange vows. The bride will generally already have an engagement ring and a wedding band is provided by the groom and vice a versa. It’s a highly symbolic gesture and one that isn’t taken lightly during the ceremony. However, what about a male engagement ring? If we’re talking about equality these days, should he be wearing one if she is? Should she provide him with a wedding band to wear that early in the game? These are all questions that are starting to pop up when Buble showed off his man-gagement ring last year. For women, it signified he was no longer on the market (in a big way!) and had an endearing feel to it.

But will they gain popularity? It depends on how the jewelry industry markets them. The diamond engagement ring is the classic marketing success story. Not long ago, a diamond engagement ring wasn’t common at all and a plain wedding band was more common. With De Beers needing to sell a mass quantity of diamonds, it was nothing short of brilliant to suggest or even create a demand for diamonds to be added to the metal bands. Nowadays, it’s more uncommon to have a plain wedding band. In terms of the male engagement ring, however, men are not as emotionally attached or driven to wear one and won’t be sucked into the potential trend as easily as women. Women may like the idea to show that their man is no longer on the market and it does make for the perfect show of complete fidelity.

When polled about the concept of men’s engagement rings, about 87% of men in the United States indicated that they would never consider or desire to wear a man-gagement ring. Some cited marketing gimmicks while others suggested it might be too feminine for them as an engagement ring but would happily wear a wedding ring. Here are some actual responses to our question of a men’s engagement ring:

“When I purchased an engagement ring for my partner, she said that she wanted to purchase one for me – they are the same, except her’s has a stone and mine doesn’t.

I wear my ring with pride, but it certainly isn’t about narcissism, its about displaying my love for my fiancee: every time I look at it, I’m reminded of our love.

couples should celebrate their love however they feel most important to them,

Need any more be said? The accusation is that jewelers are creating a solution where there is no problem. I wonder whether the same might not be true of this article.”

“Why should men be sneered at for wanting to express their commitment to a relationship in the same way women are generally expected to? I like the idea of both parties having a token of their relationship–otherwise it does feel a little bit like a way to mark the woman as “unavailable”…”

“Engagement rings are a hugely tacky waste of money in general. The expansion of what is considered necessary for a wedding is ridiculous.”

“Are these really new? 40 years ago, a couple I know bought each other rings when they got engaged: his is a signet ring, with a small flush-mounted diamond. They also have wedding rings, and he wears his signet ring on the other hand. It still looks like a very masculine ring.

I know many women who bought their fiancé a watch when they got engaged. Perhaps with fewer people wearing watches now, a ring gives you another way to exchange a gift on a significant occasion.”

“Back in 2001/2 I wore an engagement ring because I was so proud of my wife to be and my new status as engaged. I loved my wife to be then and I still love her dearly and don’t mind sharing, indeed, advertising that fact.

I did not want anything over the top and created a simple design from a gold wedding band. Essentially I had the gold band cut in half so I had two gold rings, then each had a small, discreet, diamond embedded in the top. When we married my wife gave me the other half of the ring and I had the jeweler weld them back together. I have never taken the ring off either since the day the two halves were reunited.”

“My wife and I’s wedding rings cost 20 quid each and we still wear them, we didn’t bother with engagement rings or an engagement, as it seemed like a waste of time and money and also an excuse to extract gifts from people who don’t really like you but want a good party.

The idea that you have to spent a bucketload of money to show someone you love them is ridiculous and if a woman will only accept some expensive mineral, then she’s getting married for the wrong reasons, or you’re marrying the wrong woman, either or.

Engagement should be done away with altogether, if you don’t already know that you want to get married, being engaged for a while isn’t going to make a blind bit of difference.”

From a females perspective:

“I bought my husband an engagement ring which he wore for the three years we were engaged, then when we got married he simply swapped it for his wedding ring.

I do think there’s far too much pressure on couples to buy a really expensive ‘rock’ on their engagement – isn’t it supposed to be worth a month’s income? For something that looks exactly like all the other rings in the shop! My vintage engagement ring cost less than £100 from an antique’s shop and I love it – beautiful and unique.”