Yongjun Tian studied boron nitride, a material similar to diamond, and his findings showed that it was 58% harder than diamond. While Yongjun Tian’s study has been criticized for some experimental details, its overall conclusions are sound. However, there is still much debate about the exact amount of hardness these compounds possess. However, one thing is for sure: boron nitride is harder than diamond. 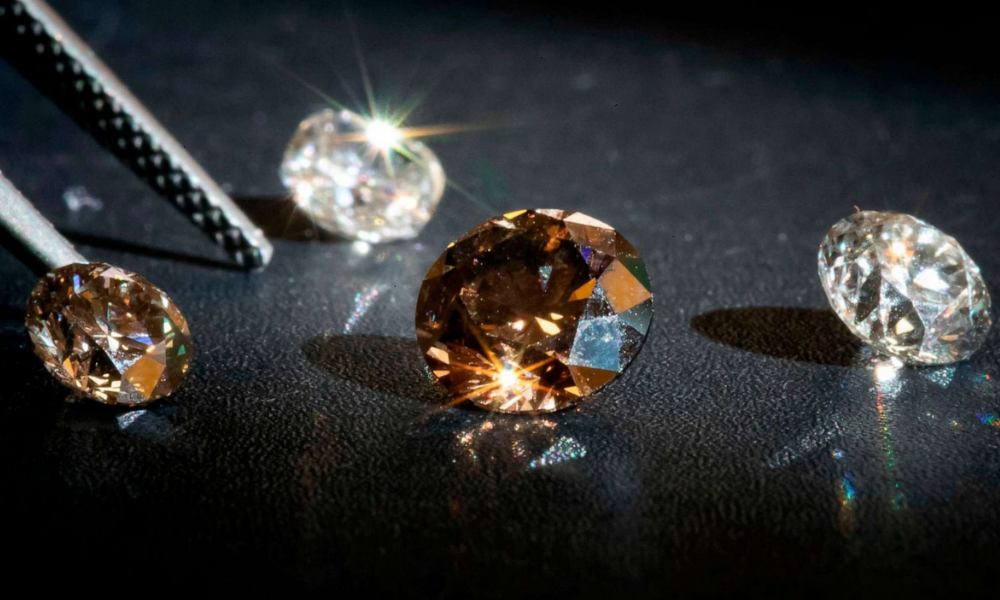 Name Some Material Harder Than Diamonds?

We’ll be leaving the realm of naturally occurring substances behind. Dyneema, a thermoplastic polyethylene polymer, is unique because its molecular weight is quite high. Most molecules we know are made up of chains of atoms with a total mass of a few thousand atomic mass units (protons and/or neutrons). However, UHMWPE (ultra-high-molecular-weight polyethylene) contains incredibly long chains, with molecular masses in the millions.

Because these polymers have very long chains, the intermolecular interactions are significantly strengthened, resulting in a particularly resistant material. It’s so tough that it has the highest impact strength of any thermoplastic ever discovered. It has been dubbed the world’s strongest fiber, outperforming all mooring and tow ropes. Despite being lighter than water, it can stop bullets and possesses 15 times the strength of steel.

Glass made of palladium micro-alloy. It’s critical to understand that all physical materials have two important properties: strength and toughness. Strength refers to how much force a material can withstand before deforming, while toughness refers to how much energy it takes to break or fracture it. Most ceramics are sturdy but not tough, fracturing easily when held in vice grips or dropped from a short distance. Rubber and other elastic materials can store energy but are easily deformed and weak.

Most glassy materials are brittle, meaning they are robust but not exceptionally tough. On the scale of materials, even reinforced glass, such as Pyrex or Gorilla Glass, isn’t extremely durable. Researchers produced a novel micro-alloy glass with five elements (phosphorous, silicon, germanium, silver, and palladium) in 2011. The palladium provided a conduit for generating shear bands, allowing the glass to bend plastically rather than break. Because of its mix of strength and durability, it outperforms all sorts of steel and everything else on this list. It’s the hardest material that doesn’t contain carbon.

Carbon nanotubes, a type of carbon that is even harder than diamonds, have been recognized since the late twentieth century. It can hold a rigid cylindrical-shaped structure more stably than any other structure known to humankind because it binds carbon together into a hexagonal shape. If you take an aggregate of carbon nanotubes and make a macroscopic sheet of them, you can make buckypaper, which is a thin sheet.

Each nanotube is only 2 to 4 nanometers in diameter, but they are powerful and durable. Although it is only 10% the weight of steel, it has hundreds of times the strength. It’s fireproof, extremely thermally conductive, possesses tremendous electromagnetic shielding properties, and could lead to materials science, electronics, military, and even biological applications. But buckypaper cannot be made of 100 percent nanotubes, which is perhaps what keeps it out of the top spot on this list.

Finally, a hexagonal carbon lattice with a single atom thickness. A graphene sheet is undoubtedly the most innovative material to develop and use in the twenty-first century. It is the most basic structural constituent of carbon nanotubes, and its uses are expanding all the time. Graphene is anticipated to expand from a multimillion-dollar sector to a multibillion-dollar one in just a few decades.

It is the strongest material known in terms of thickness, is an exceptional conductor of both heat and electricity, and is practically transparent to light. Andre Geim and Konstantin Novoselov were awarded the Nobel Prize in Physics in 2010 for pioneering graphene studies, and commercial applications have only grown since then. Graphene is now the thinnest substance known, and the six-year time span between Geim and Novoselov’s study and their Nobel Prize is one of the shortest in physics history.

What are Some Characteristics of Element Harder than Diamond?

The first is wurtzite boron nitride, which has a diamond-like structure composed of different atoms.

The second mineral, lonsdaleite, or hexagonal diamond, is composed of carbon atoms arranged in a different shape than diamond.

Only small amounts of wurtzite boron nitride and lonsdaleite exist naturally or have been synthesized in the lab, so their superior strength has gone unnoticed until now. According to the simulation, wurtzite boron nitride can withstand 18% more stress than diamond, while lonsdaleite can withstand 58 percent more. If physical experiments validated the findings, both materials would be significantly tougher than any substance ever measured.

Taking those tests, on the other hand, will not be simple. Because both are extremely rare in nature, a method must be devised to produce enough of each to test the hypothesis.

When meteorites containing graphite collide with the Earth, the rare mineral lonsdaleite is generated, while wurtzite boron nitride is formed during volcanic eruptions that produce extremely high temperatures and pressures.

On the other hand, Wurtzite boron nitride may prove to be the more beneficial of the two if proven because it is stable in oxygen at higher temperatures than diamond. This makes it excellent for use on the tips of high-temperature cutting and drilling tools, or as corrosion-resistant films on the surface of a spacecraft, for example.

Surprisingly, the hardness of wurtzite boron nitride appears to be due to the flexibility of the bonds between the atoms that make it up. When a material is stressed, some linkages reorient themselves by around 90 degrees to reduce tension.

Although diamonds go through a similar process, something about the structure of wurtzite boron nitride makes it approximately 80 percent stronger after the treatment, according to study co-author Changfeng Chen of the University of Nevada, Las Vegas.

A comparable study was conducted by Natalia Dubrovinskaia of the University of Heidelberg in Germany.

“This is crucial because any attempt to understand the mechanism that increases a material’s property, particularly hardness, is technologically relevant,” she told New Scientist.

She argues that the more people understand what drives material hardness, the easier it will be to develop hard materials to order.

She does, however, remind out that single crystals of each element would be required to verify the idea. So far, no method for isolating or growing such crystals of either material has been discovered.

Because there aren’t enough of these exotic materials to test, the exciting results of the simulations described above remain unconfirmed by experiment. “Since our 2009 work, there has been no report of the large-scale synthesis of wurtzite boron nitride or hexagonal diamond,” Changfeng Chen explains.

However, the hunt for ultra-hard crystals continues to yield promising results. Last year, Yongjun Tian and colleagues from Yanshan University in Qinhuangdao, China, investigated a cubic form of boron nitride – rather than the hexagonal form Chen studied – that they claimed was also harder than diamond.

Although the study’s experimental details have been criticized, Chen believes Tian’s material is still worth exploring. “Understanding the atomistic process underlying this amazing result is the primary problem,” Chen explains.

What is Boron Nitride?

Boron nitride, a synthetic material first produced in 1957, is similar to carbon in that it has multiple allotropes. It has the same crystalline structure as the diamond in its cubic form (c-BN), but instead of carbon atoms, it is made up of alternately-bonded boron and nitrogen atoms. Chemically and thermally stable, c-BN is widely employed in the automotive and aerospace industries as a superhard machine tool coating.

But, with a Vickers hardness of roughly 50 GPa, cubic boron nitride is still only the world’s second hardest substance. Its hexagonal form (w-BN) was once thought to be even tougher, but these claims were based on theoretical models that anticipated an indentation strength 18% higher than diamond. Unfortunately, w-BN is extremely rare in nature and difficult to manufacture in large enough amounts to effectively evaluate this claim.

What is Synthetic Diamond?

Synthetic diamond has been around since the 1950s, and because of its unusual crystal structure, it is generally said to be tougher than genuine diamond. It can be made by forcing graphite’s structure to reorganize into a tetrahedral diamond under high pressure and temperature, but this is time-consuming and expensive. Another way is to use carbon atoms extracted from heated hydrocarbon vapors to build it up successfully; however, the substrate materials available are restricted.

Synthetic diamonds are polycrystalline stones made up of aggregates of much smaller crystallites or “grains” ranging in size from a few microns to a few nanometers. In contrast, most natural diamonds used for jewelry have massive monocrystals. The more grain boundaries and the harder the material, the smaller the grain size. According to recent studies, some synthetic diamond possesses a Vickers hardness of up to 200 GPa.

Researchers at North Carolina State University recently discovered a novel kind of carbon that is different from existing allotropes and is said to be tougher than diamond. This novel form was created by heating non-crystalline carbon to 3,700 °C with a high-powered fast laser pulse, then rapidly cooling or “quenching” it to form micron-sized diamonds – hence the term “Q-carbon.”

The scientists discovered that Q-carbon is 60% tougher than diamond-like carbon (a type of amorphous carbon with similar properties to diamond). This has led them to believe that Q-carbon is tougher than diamond, albeit this has yet to be demonstrated empirically. When exposed to light, Q-carbon also possesses the odd traits of magnetic and luminous. However, its primary application has been as a stage in producing microscopic synthetic diamond particles at room temperature and pressure. These nanodiamonds are too small to be used in jewelry, but they’re perfect for covering cutting and polishing instruments.

While diamonds are the hardest natural substance, other natural and synthetic materials are harder. Two natural materials, lonsdaleite (carbon) and wurtzite (boron nitride), are 58 percent harder than diamond. These substances can actually surpass diamonds by 18 percent when subjected to pressure. Then there are materials, like ceramics, that are not as scratch-resistant as diamonds.

Graphene is 200 times stronger than steel by weight, yet it’s lighter than paper. It’s also 98 percent transparent and conducts electricity better than any other material. Diamond is the hardest substance on earth, and it has the highest Mohs hardness grade of 10.

Scientists have discovered that AM-III materials possess superior mechanical properties exceeding any amorphous material. Diamond, for instance, owes its strength to its regular structure, where single carbon atoms form a tetrahedral structure. By contrast, AM-III materials don’t have this regular structure. It’s therefore challenging to measure a diamond’s hardness with this method. For this reason, scientists have developed an alternative way to measure hardness.