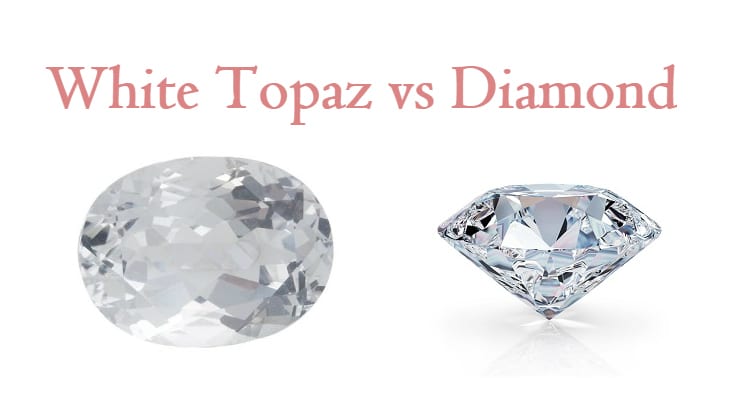 White topaz vs diamond in terms of color is arguably a close battle. The clearest type of topaz is transparent. Colored varieties of white topaz develop when impurities are present in the mineral. Although some people are satisfied with white topaz as a diamond substitute, it’s not necessarily the best substitute.

Diamond maintains its sparkle forever, an important factor if you’re buying an engagement ring. White topaz, however, gradually loses sparkle over time as the person wears it. This can be a drawback if you’re looking into white topaz engagement rings. White topaz loses sparkle over time because of scratches accumulating. Diamond is hard enough to not scratch, so it’s able to maintain its sparkle.

White topaz is relatively hard, so it’s still a good option in place of a diamond. It’s just not as hard as a diamond or a few other diamond substitutes. White topaz will scratch over time when it’s worn. Sharp blows can break the gemstone as well.

The brightness and shininess of white topaz is negatively impacted from wear and tear. In contrast, diamond never dulls or becomes faded. There is something you can do to restore the shine of white topaz, however. You can have it professionally repolished.

One way white topaz vs diamond is similar is they both have internal inclusions. All gemstones have some sort of internal flaws, such as crystal formations, lines, and spots. How many inclusions a gemstone has varies, which plays a role in quality.

If finding the most valuable stone isn’t a priority for you, then inclusions don’t matter as long as you can’t see them without a microscope. Some people aren’t bothered by inclusions that are visible because they think it’s part of the gemstone’s charm. Thus, the issue over clarity is truly a personal one. Only you know what’s important to you in the appearance of a gemstone.

A cut that’s too deep will hide the gemstone when it’s placed in the setting. If the white topaz won’t be set in a piece of jewelry, then depth of the cut won’t matter. Cut is a gemstone feature often mistaken as shape. A gemstone’s cut refers to its symmetry, polish, and proportioning. Examples of diamond cuts include round, baguette, princess, and emerald.

Value differs between white topaz vs diamond when it comes to size. Larger diamonds are often more valuable, assuming clarity is also good, than smaller diamonds. One reason why diamonds are more expensive and in higher demand is because they’re rarer than small diamonds.

White topaz, on the other hand, may be less expensive in larger stones because imperfections are more noticeable the bigger it is. In addition, the sparkle and brilliance of white topaz decreases with size. It will become more obvious the white topaz is a diamond substitute the larger it is.

White topaz is cheaper than diamond, one of its biggest draws. A one carat diamond can cost thousands of dollars, whereas a one carat topaz is around $100-$200. However, there are some good diamonds available for less than $1,000. Whether or not it’s worth buying white topaz vs diamond for a lower cost is something only you can decide.

If it’s for an engagement ring and sparkle and durability matter most to you, then diamond is a better choice. For other pieces of jewelry, you may find you don’t mind white topaz as a diamond substitute. It won’t be worn as frequently as a wedding ring, so its sparkle will last longer before needing to be professionally repolished again.

The white topaz vs diamond debate is a matter of personal preference. It depends on what kind of jewelry the gemstone is intended for and what elements of a gemstone are most important to the recipient. White topaz is a good diamond substitute, but it’s not for everyone.

One must keep in mind that it scratches more easily than diamond and needs to be repolished frequently by a professional to prevent the stone from dulling from the scratches.

Which stone do you prefer between white topaz vs diamond and why? Let us know in the comments below.