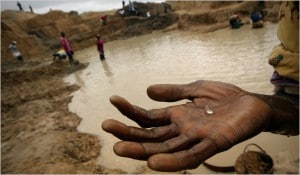 When hearing the term “blood diamonds” for the first time, many people initially think it is a phrase to describe a beautiful deep red diamond. However, this could not be farther from the truth. Blood diamonds are the product of brutality, corruption and human rights abuses. Unfortunately, there are still many blood diamonds on the market today and it is crucial that people understand the history of the beautiful stones before purchasing.

Blood diamonds are also known as war or conflict diamonds. They are mined primarily in Africa and unfortunately add to the problems in already conflicted areas. The warlords and militias control a great deal of the diamond trade in certain areas in Africa. The movie “Blood Diamond” starring Leonardo DiCaprio brought about considerable awareness to the shady aspects of the diamond industry and the human rights abuses associated with it.

What Exactly Are Blood Diamonds?

Simply put, blood or conflict diamonds are any diamonds which originate or are mined from a war torn area where corrupt warlords control the illicit trade of these stones. Many, but not all, diamonds are mined in extreme conditions by children and generations of families who are entrenched in this modern day slavery. Some experts are finding diamonds coming out of many of the mines in Africa are obtained illegally and then sold as legitimate Kimberly Process approved diamonds to stores in North America.

Where are Blood Diamonds Found?

Approximately 60% of the diamonds in the world come from Africa. Many of the blood diamonds are being sold and trafficked in war riddled countries such as Angola, Cote D’Ivoire/Ivory Coast, Liberia, Sierra Leone, Zimbabwe and the Republic of Congo. As well, many illegally obtained diamonds also come from areas of the Middle East, which don’t have diamond mines per se but are countries where diamonds are filtered in and out of–possibly funding al-Qaeda.

For many years diamonds have been traded and purchased illegally, with little regulation from the corrupt nations involved. In the late 1990’s the United Nations began focusing more heavily on the blood diamonds coming out of Angola and sanctioned all purchases or sales of diamonds originating from this country. Another key player in the blood diamond trade is the country of Sierra Leone. In the early 1990’s war crimes abounded, civil war broke out and warlords worked tirelessly to secure control of diamond-rich parts of the country. The warlords caused incredible human suffering in the form of mass murders, rapes, violence and slavery, with thousands of the forced recruits being children. The fighting in many of these civil war-ridden countries continues and unfortunately much of the problems being compounded by the illegal diamond trade.

The Kimberley Process: Is It Legit?

In order to combat the undocumented  illegal diamonds in the world, in the early 2000’s the United Nations created a system in order to certify, verify and monitor the sale of diamonds throughout the world. The countries involved are required to show proof of a Kimberly Process certificate guaranteeing they did not export or import diamonds from non-compliant countries.

The Kimberly Process is not without criticism, as it is partly a self-policing system.  Global Witness, a UK-based NGO which headed up the campaign to create a certification system and the Kimberly Process,  states that, “Despite having all tools in place, the scheme was failing effectively to address issues of non-compliance, smuggling, money laundering and human right’s abuses in the world’s alluvial diamond fields.”

The controversial history of blood diamonds is cause for alarm and buyers must be forewarned about where their diamonds come from. Many NGO’s and  human rights groups are working together to ensure that customers have a more clear understanding of the issues in order to make a more informed purchase. Other solutions include purchasing Canadian diamonds, man-made diamonds or other diamond alternatives to ensure the stones are 100% conflict and blood free.