When it was first discovered, the Cullinan diamond was a Goliath among diamonds. Weighing in at over 3,106 carats, or a whopping 621.35 grams, this rough gem tipped the scales of previous knowledge about the underground world of diamonds.

It’s understandable then how, overwhelmed by the sheer size of the stone and the difficulty of the job ahead, even the most experienced tough-minded cleaver of the day – Joseph Asscher – is said to have fainted.

After all, he had been entrusted with making a diamond fit for the crown of a mighty king.

It was African winter, late one afternoon on January 26, 1905. Shouts of excitement bubbled to the surface of the Cullinan mine. A miner named Thomas Evan Powell had been lucky that day.

He had unearthed a precious rock of unbelievable size, only 9 meters from the surface. 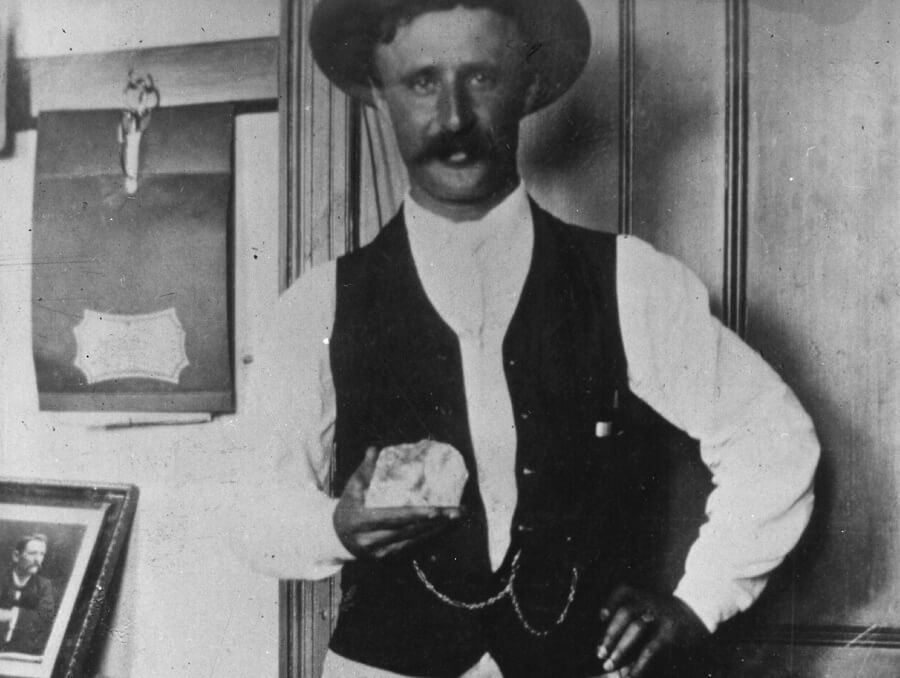 He took it to the mine offices to be inspected and handed it to Frederick Wells, surface manager of the Premier Diamond Mining Company.

The diamond was truly a sight to behold. Twice the size of any previously discovered gem-quality rock, its weight was ascertained at 3,106 carats (621.2 grams).

Sir William Crookes, a famed scientist and lovable eccentric of the time, first noted the diamond’s features. Its remarkable clarity hid a black spot in the middle, around which the colors gleamed stronger, but also shifted with the angle of the viewer. It was a sign of internal strain, the scientist observed, and showed the diamond had been broken up by natural forces. 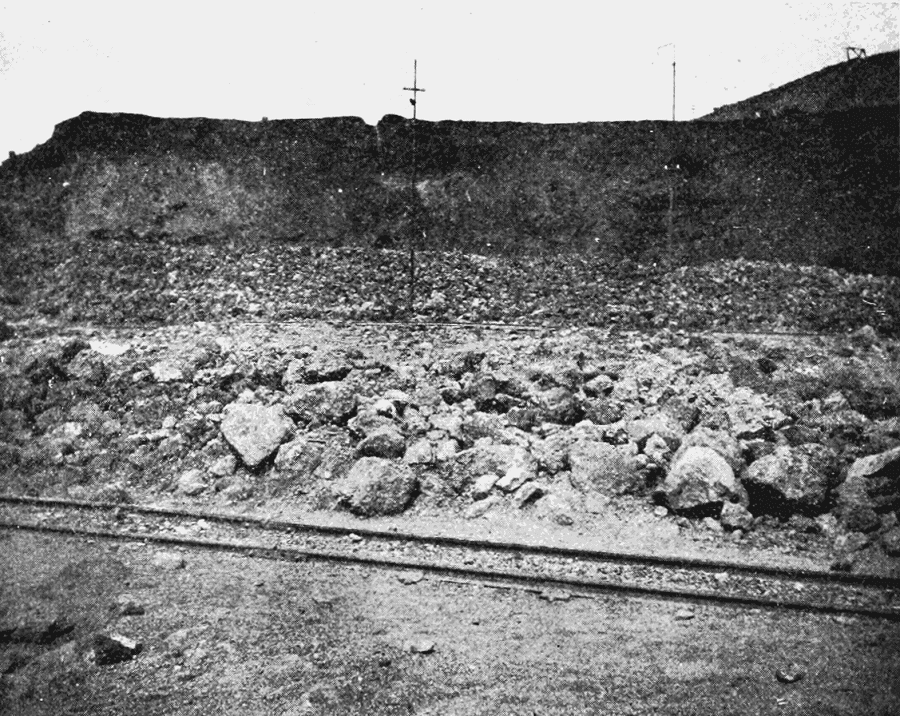 The verdict came swift, and Crookes pronounced the words that would trigger a new wave of enthusiasm among the miners and prospectors at the Cullinan mine:

“a fragment, probably less than half, of a distorted octahedral crystal; the other portions still await discovery by some fortunate miner.”

The diamond soon became a worldwide sensation, and seeing how it needed a name for the printing press, it was named the Cullinan after Sir Thomas Cullinan, the owner of the diamond mine in which it was found.

The diamond was purchased by the Transvaal Government, which had been reconciled with England after the Anglo-Boer war, for £150,000 and insured for ten times the amount. 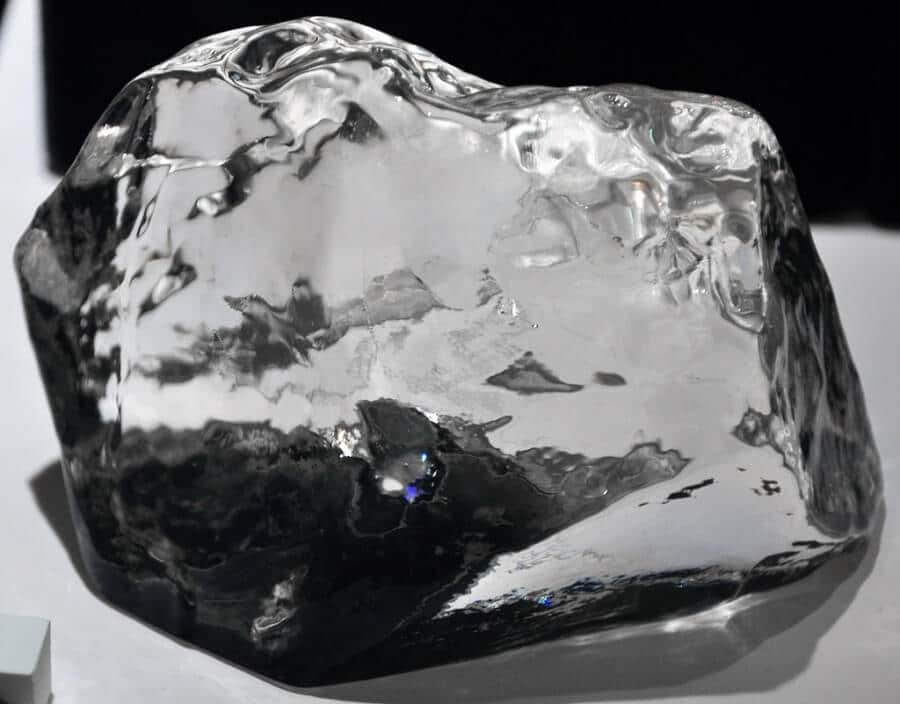 Now came the time to decide whether the stone was to be presented to King Edward VII as a goodwill gesture and an extravagant gift to commemorate his 66th birthday. The idea was submitted to a vote.

Soon after, the Cullinan diamond took the long journey to its new home – Buckingham Palace, London.

The journey was not at all devoid of perils. The value of the diamond put it in the high-security risk category, and the waters around coastal Africa swarmed with pirates. A diversionary tactic was in order.

While a heavily guarded ship was rumoured to carry the priceless gem – nothing more than a decoy transporting a replica of the Cullinan, the real diamond was delivered to the king in a plain box via parcel post. And as the king wished…

… it was so commanded. Edward VII commissioned the cut to the Amsterdam-based company I. J. Asscher and Co., who had also done a terrific job with the Excelsior and other large gems. 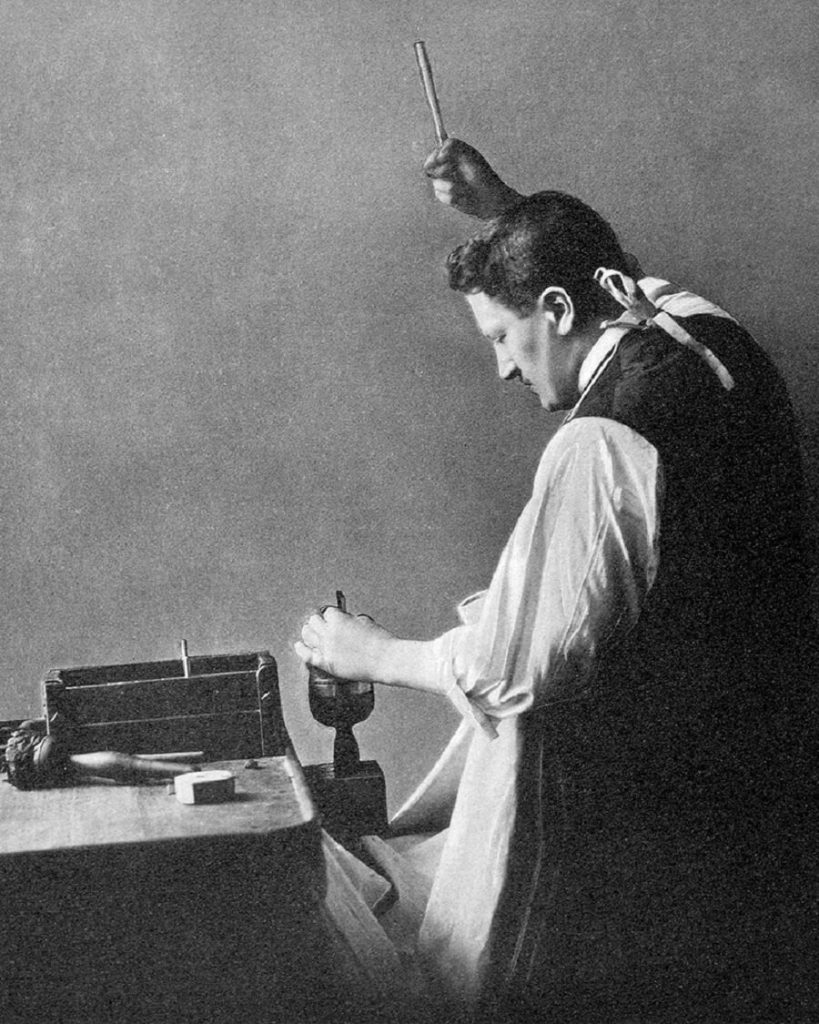 The Cullinan diamond was examined and studied for eight months previous to the cutting day. In 1908, a first attempt resulted in the blade breaking against the roughness of the 3,106 carats.

After a second successful attempt – when the famous cutter had actually fainted with strain and anticipation, the Cullinan delivered wildly. The stone was split into 9 major stones, 96 smaller brilliants, and 9.50 carats of unpolished pieces.

The Cullinans – The Royal Family of Diamonds

Nowadays, we know the Cullinan Diamond best as the nine different gems scattered throughout the British royal collection. The rest were purchased by the South African government and presented to Queen Mary in 1910.

The Cullinan I Diamond – The Great Star of Africa

A pear-shaped cut diamond weighing 530.20 carats, The Cullinan I Diamond is set at the top of the Sovereign’s Scepter with Cross which was redesigned in 1910 to accommodate the large gem addition.

Cullinan I is to this day the largest cut diamond in the world, although when it comes to polished diamonds, it lost the title in 1985 to the Golden Jubilee Diamond of 545.67 carats. 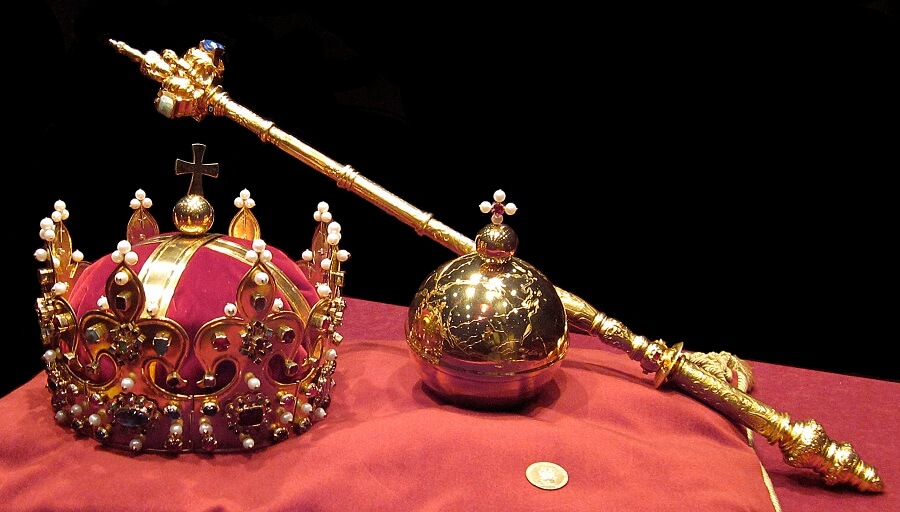 The diamond can be taken out of its setting to be worn as a pendant suspended from Cullinan II to make a brooch. It is now on display in the Tower of London for all eyes to behold.

The Cullinan II – The Second Star of Africa

The Cullinan II Diamond is a cushion-cut diamond with 66 facets and 317,40 carats chiefly mounted in the band of the Imperial State Crown, one of the British monarchy’s most symbolic treasures. 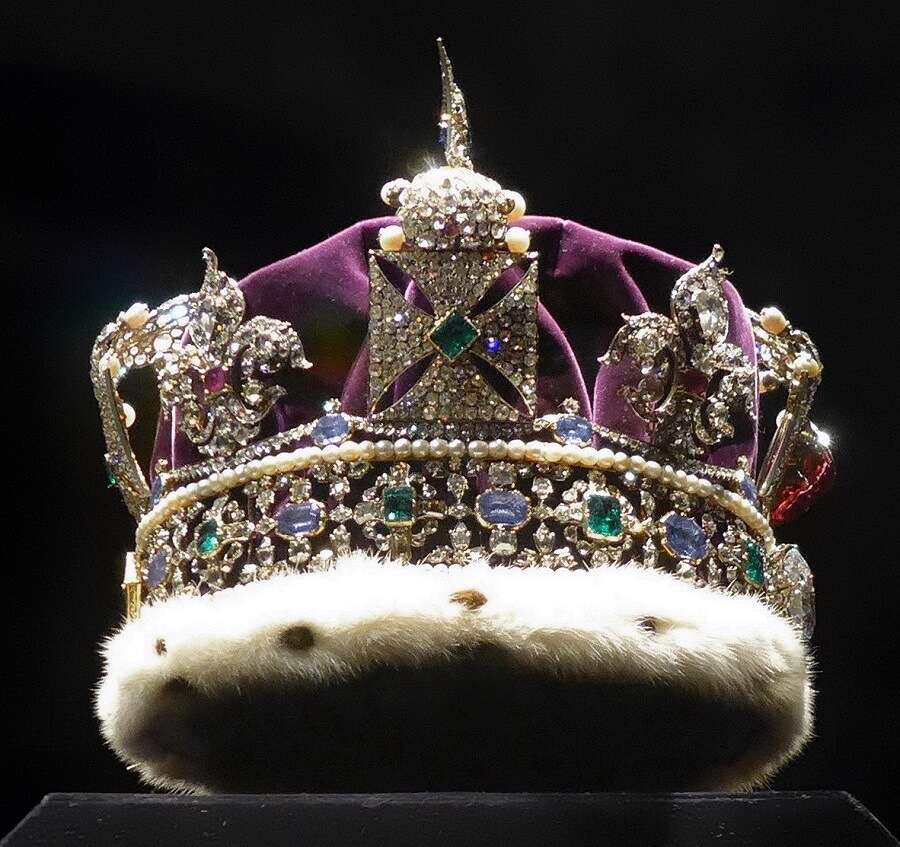 Among the other 2868 diamonds that adorn the Crown, the Cullinan II undoubtedly steals the show. It is also part of the Tower of London exhibition as part of the Crown Jewels.

The Cullinan III, aka The Lesser Star of Africa, is a favorite of Queen Mary’s, wife and queen consort of King George V, who had it mounted in the top cross pattee of the crown made for her coronation in 1911.

The pear-shaped diamond weighing 94.40 carats left its place in the crown’s pinnacle to a rock crystal replica to be worn with The Cullinan IV, a 63.60-carat cushion shaped diamond, as a pendant-brooch by Elizabeth II.

The queen has revealed how the diamond pair is affectionately referred to in the Royal Family as the “Granny’s Chips”.

Cullinan V is an 18.8-carat heart-shaped cut for Queen Mary to be mounted alternatively in the crown as a replacement for the Koh-i-Noor and as part of the stomacher worn by the queen at the Delhi Durbar in 1911. Much smaller than its sister diamonds, it has been worn by Queen Elizabeth II as part of a brooch countless times.

Another grouping of the nine diamonds into a single elegant brooch features both Cullinan VI and VIII, two marquise-cut diamonds weighing 11.5 and 6.8 carats respectively.

Queen Elizabeth has never been seen wearing this piece of jewelry in public. When asked the reason, she famously complained that ‘it gets in the soup’.

The Cullinan VII – A Queen’s Necklace

Another piece set by Queen Mary as an adornment to the diamond-and-emerald Delhi Durbar necklace, part of the parure, is The Cullinan VII, an 8.80 carat marquise-cut stone hanging elegantly from the nine pieces of Cambridge emeralds. 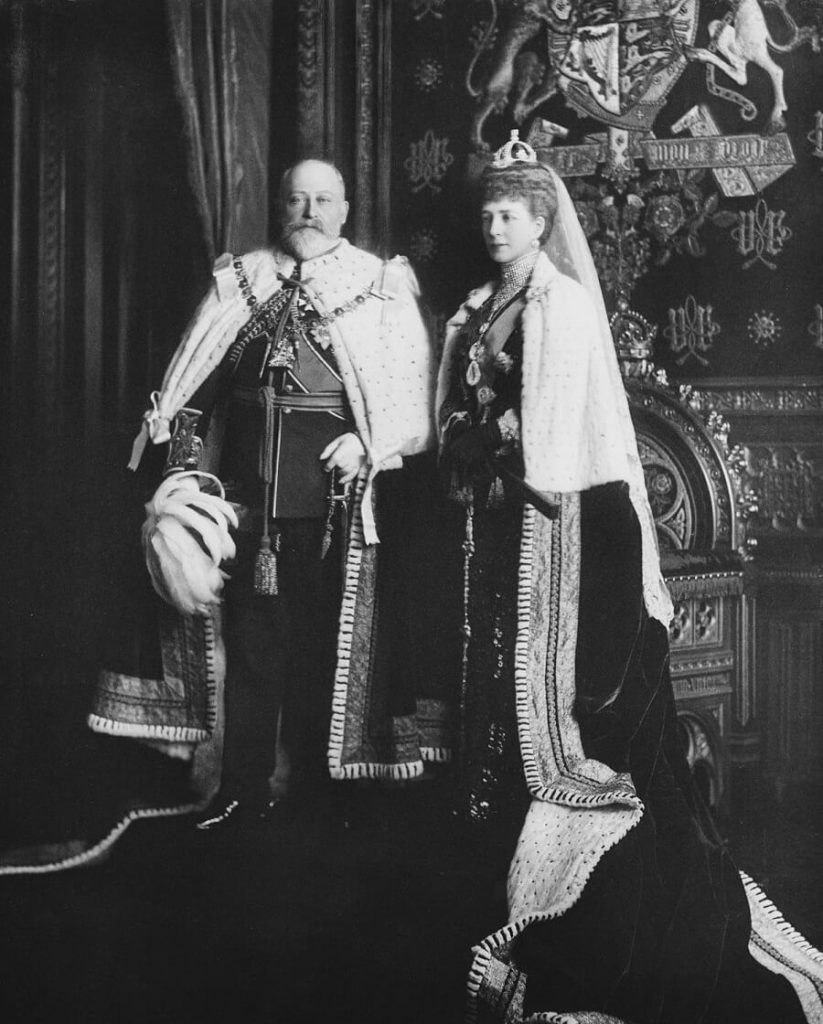 King Edward VII offered this stone to Queen Alexandra, his wife and queen consort. Queen Mary inherited it upon her death.

The Cullinan IX – A Small Gem to Fit The Royal Ring

The Cullinan IX is the smallest of the family of diamonds, but not as insignificant as to be overlooked or ignored.

Rather, set into a platinum ring designed for Queen Mary, the 4.39 carat pear shaped stone is present testimony to the incredible skill and attention to detail of the Asscher brothers that managed to supplant rudimentary cutting techniques and equipment.

How Much is the Cullinan Diamond Worth Today?

All together, the brilliant gems that once made up the Cullinan diamond are said to be worth more than $2 billion dollars.

Its value might be a rough estimate, but the Cullinan Diamond has polished its reputation as a gem of adventure and politics, the genius of a cutter and the elegance of a queen. A star fallen from the skies on African land.