First and foremost, both diamonds and Forever One Moissanite gemstones are extremely long-lasting investments. Diamonds have a hardness rating of 10 on the Mohs scale, and Forever One Moissanite is right behind them with 9.25. This means that you can wear both of these gems daily without worrying about them breaking. Second, they’re both beautiful. 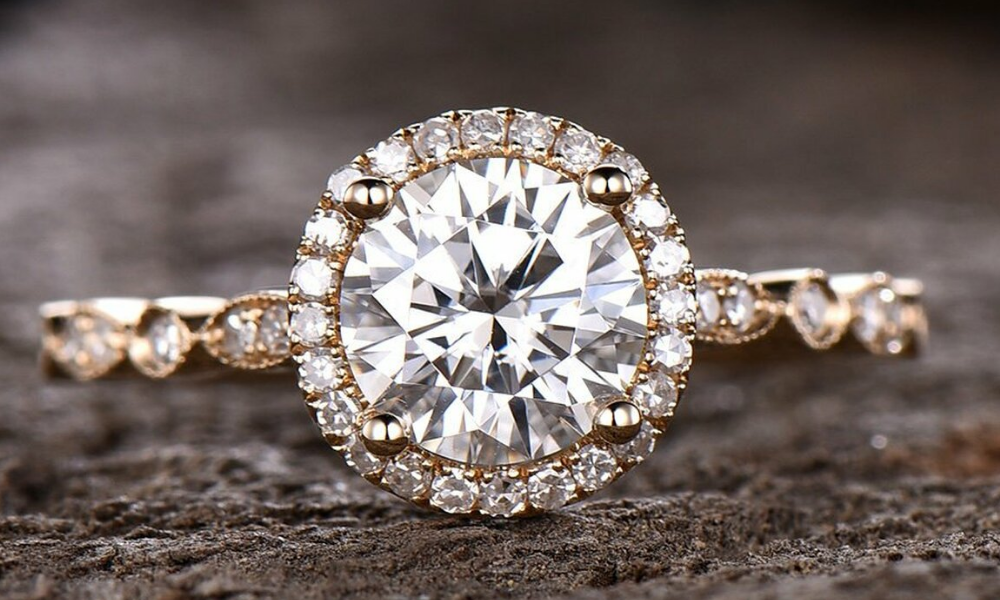 Compared to diamonds, one of the most significant advantages of Moissanite is its multi-color fire, whereas diamonds tend to be a single-hue gem. Additionally, diamonds can be cut into many different shapes, whereas Moissanite cannot be cut into many different shapes. Diamonds are more expensive per carat because they are so widely available, owing to their high demand. They can, however, be passed down from generation to generation within a family.

Moissanite is a clear, gleaming gemstone that resembles a diamond in appearance. Dr. Ferdinand Henri Moissan discovered it in a meteor crater 100 years ago. Because there was such a small amount of this beautiful gemstone in that crater, scientists went to great lengths to figure out how to make more.

Diamonds are formed when coal and other minerals are compressed for an extended period by the earth. They have a brilliant fire and sparkle and are thought to be rare (though a little-known fact is that this is intentional). When light hits them, they reflect a limited range of colors.

On the other hand, most Moissanite has a slight color to them. While a diamond will glow white in the light, Moissanite will usually have a rainbow effect. But that’s where Moissanite Forever One comes in.

If you wanted a simple 1-carat diamond ring near-colorless (which is how you get the most brilliant sparkle), you’d have to budget at least $5,000.

However, when you choose a stunning Forever One Moissanite ring, you can get a colorless option starting at $1,210. That’s a smidgeon of the price of a conventional diamond, and that sounds like a fantastic deal when you factor in the other advantages.

One of the best features of Forever One Moissanite is how sparkly it is. This is due to their extremely high refractive index, which means they have a lot more fire and brilliance than diamonds.

A jeweler may sell you a diamond with a flaw that you can see. On the other hand, all moissanite gems should have a clarity of VS or higher. In a nutshell, they’re faultless. Diamonds are beautiful, but there is a dark side to them. Most people have heard of the term “blood diamond,” which refers to diamonds that originated in Africa and were used to fund a brutal civil war in Sierra Leone. This war claimed the lives of 75,000 people and wreaked havoc on the country. It still relies on the assistance of other countries to survive. Even though many places claim to have conflict-free diamonds, it’s challenging to find one today that hasn’t been filtered through that system somehow. Take Forever One Moissanite at this point. Moissanite can form in nature, but it’s highly uncommon. That means. Most likely created the MoissaniteMoissanite in your ring in a laboratory. These lab-created gemstones are made relatively by people who are well compensated for their efforts. They’re not used to funding a vicious war, so they’re conflict-free and guilt-free!

Moissanites, like diamonds, are available in various shapes and sizes. Round, oval, pear, cushion, princess, and radiant cut moissanite are among the shapes available. Some moissanite is even cut in antique cuts, which were famous for diamonds hundreds of years ago and are still used today. The brilliant round cut is the most popular for MoissaniteMoissanite because of its simplicity. There are several reasons for the popularity of the brilliant round cut, including the following:

The round, brilliant-cut is similar to that of a diamond in that it provides the most brilliance and fire. This means that when the stone is exposed to bright light, which enters the stone and bounces off its facets in different directions, it will shine brighter and more brilliantly.

Diamonds, the world’s hardest mineral, are incredibly resilient. Scratches and other damage that could affect the appearance of softer stones can be avoided by using hard stones. Below is the Mohs scale for understanding mineral hardness. The graph shows that diamonds are more complex than steel and tungsten carbide.

Experts say the brilliant round cut is the best cut for concealing color and making a stone appear wholly or nearly colorless. Moissanites have an advantage over other gemstones in that it helps to conceal the yellow and green tints that are typically visible in moans.

This cut is highly versatile. Can find it in both modern and vintage engagement rings and other jewelry pieces, thanks to its unique design.

As a rule, moissanite looks its best in cuts that conceal color while highlighting the stone’s brilliance, such as the princess cut (for moissanite, this shape is referred to as the “square cut”), oval cut, radiant cut, and marquise cut, among other shapes.

Diamond is a solid form of carbon with atoms arranged in a diamond cubic crystal structure. Graphite is the most chemically stable form of carbon at room temperature and pressure, but Diamond converts to it very slowly. Diamond is the most complex and thermally conductive natural material, ideal for industrial applications like cutting and polishing tools. They also allow diamond anvil cells to subject materials to extreme pressures.

Diamond’s hardness makes it a good gemstone, and only other diamonds can scratch it, so it keeps its polish. Its scratch resistance makes it ideal for daily wear, which may explain its popularity as the preferred gem in engagement or wedding rings.

The most complex natural diamonds come from the Copeton and Bingara fields in New England and New South Wales. These diamonds are used to polish other diamonds and are usually small. Their hardness is linked to their single-stage crystal growth form. More growth stages produce inclusions, flaws, and defect planes in the crystal lattice, affecting hardness. Regular diamonds can be treated with high pressure and high temperature to produce harder diamonds than hardness gauge diamonds.

The Diamond’s hardness makes it a good gemstone, and only other diamonds can scratch it, so it keeps its polish. Its scratch resistance makes it ideal for daily wear, which may explain its popularity as the preferred gem in engagement or wedding rings.

Toughness is a mechanical property related to hardness and is the ability of a material to withstand forceful impact. Diamond is 7.5–10 MPam1/2 tough. Similar to other ceramic materials, but not as tough as most engineering materials like alloys, which typically have over 100 MPam1/2. The macroscopic geometry of a diamond contributes to its brittleness. As a result of its cleavage plane, Diamond is more fragile in some directions. It is used to cleave some diamonds before faceting. “Impact toughness” is one of the leading synthetic industrial diamond quality indices.

Clarity is one of the 4C’s (color, clarity, cut, and carat weight) used to grade diamonds. The Gemological Institute of America (GIA) created 11 clarity scales to assess a diamond’s worth. It ranges from Flawless (FL) to Included (I), with internally flawless (IF), very slightly included (VVS), and very slightly included (VS) in between. Natural minerals and oxides cause impurities in natural diamonds. It is based on the color, size, location, and quantity of clarity visible under 10x magnification. Optical methods can extract diamond inclusions. Pre-enhancement images are taken, then the inclusions are removed, followed by the diamond facets and noises.

The Hope Diamond has a bandgap of 5.5 eV, corresponding to a deep ultraviolet wavelength of 225 nanometers. A pure diamond should appear as a clear, colorless crystal, and Diamond colors come from lattice flaws and impurities. Only nitrogen, boron, and hydrogen atoms can be introduced into diamond during growth at significant concentrations (up to atomic percent). The transition metals nickel and cobalt, commonly used in high-pressure, high-temperature techniques to grow synthetic Diamonds, have been detected as individual atoms in Diamond. Diamond can be ion-implanted with almost any element.

Moissanite vs. Diamond Forever One

There are a few things to consider when comparing Forever One Moissanite to Diamond.

This means that you can wear both gems every day without fear of them breaking.

Second, they’re both beautiful, and they gleam in the light and will captivate anyone who sees them. Forever One MoissaniteMoissanite is colorless, unlike some moissanite gems with rainbow sparkle.

Finally, these gems come in a wide range of cuts and shapes.

Now that we’ve discussed the similarities and differences between Forever One Moissanite and diamonds let’s look at the differences. 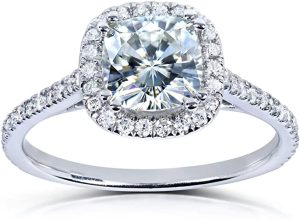 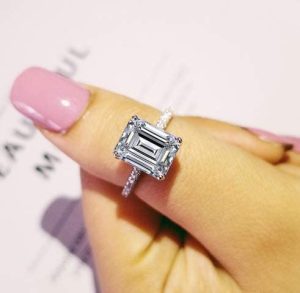 Moissanite is not a “Fake Diamond,”

Thanks to both time and tradition, diamonds have somehow become the engagement ring that people expect. They represent infinite love and strength to many people. There’s a snobbish attitude toward lab-created gemstones, no matter how beautiful, durable, or rare.

But make no mistake about it. Moissanite from Forever One is not a “fake diamond.” It’s an entirely colorless gemstone that’s stunning on its own. And if you want to impress your significant other, this is the gem for you.

Does Moissanite Lose its Radiance Over Time?

Consequently, one of the most appealing characteristics of MoissaniteMoissanite is that it never, in fact, loses its radiance, and it is significantly more affordable than diamonds and superior to any other diamond alternative stone, such as the more commonly known “CZ.”

Is Moissanite a Diamond Alternative?

Moissanites are not a diamond, according to experts and non-experts alike Their substance, brilliance, and color are all distinct. Diamonds are naturally occurring, complex, beautiful, and valuable. Moissanites are usually created in a lab from silicon carbide, and color and light performance are two critical visual differences between them and diamonds.

Yes. Moissanites are rugged and durable gemstones. Moissanite should be able to last for the rest of your life without losing its luster or becoming damaged. A moissanite ring will last a long time if the setting is made of a high-quality metal such as platinum or gold.

What is the Origin of Moissanite?

Moissanite comes from space in its natural state. Moissanite was first discovered in Arizona by Henri Moissan more than a century ago, inside the crater left behind when a meteor landed on the planet.

Is the Forever One a Better Choice than Moissanite or Not?

Forever OneTM embodies the brilliance of your unique sparkle in all of its glory. Forever One is the most premium moissanite available, and it is exclusively created, cut, and faceted by Charles & Colvard. It has been decades in the making. The quality of Forever One Moissanite is superior to that of other moissanite brands because it is grown using a patented process.

Moissanite has undergone extensive testing to ensure that it is as flawless as a diamond. Unlike diamonds, however, MoissaniteMoissanite can have a yellowish tint. Choose a Forever One Moissanite to avoid this. They’re both stunning, and they’re made ethically. They’re also available in a wide range of shapes and sizes.

The Forever One Moissanite is less expensive and has a good reputation. This gemstone is also a more environmentally friendly option than diamonds, so it is famous for engagement rings, necklaces, and earrings. Forever One is not for everyone, but it’s a good choice if you’re looking for a clear and beautiful gemstone. As a result, you can rest assured that your significant other will adore the ring.