What Is a Green Diamond?

A green diamond is a diamond that has been exposed to significant levels of radiation while under the earth’s surface. After diamonds form deep in the earth, some diamonds maneuver through volcano vents, putting them in direct contact with radiation after they have crystalized. These diamonds, depending on the type of radiation and the time in direct proximity to the radiation, are often colored in unique and exceptional ways. 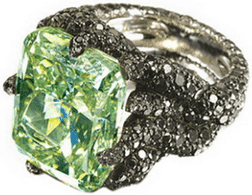 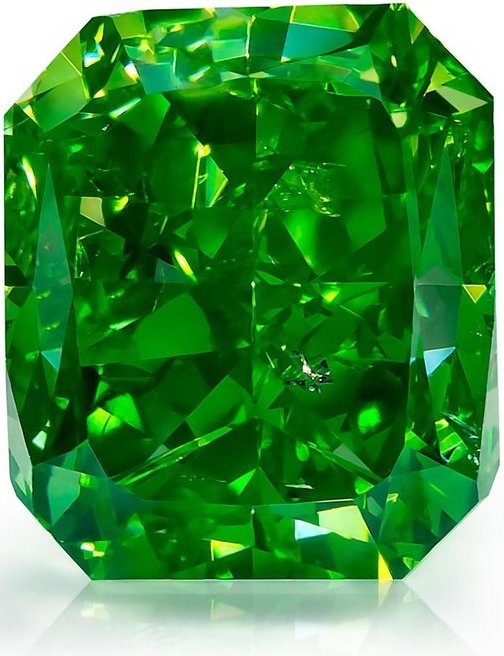 Where Do Green Diamonds Come From?

Green diamonds originate from South America (primarily Brazil, Guyana, and Venezuela), although they have been discovered occasionally in Africa and India as well.

The Dresden Green diamond at 40.70 carats is the largest natural body color green diamond in the world and is currently located at the Albertinum Museum in Saxony, Germany. This is the city for which the stone was named. The Dresden Green diamond was discovered in the Golconda district in India in the early 18th Century and was purchased by the King of Poland in 1726. The diamond was later sold to the next King of Poland (Freidrich Augustus II) and was set in a royal badge. 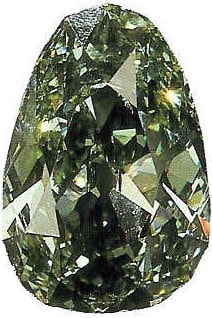 The section of the badge containing the Dresden Green Diamond was put in a hat ornament in 1768, where it remains today. Scientists have been using the Dresden Green Diamond to perfect diamond-testing research since 1988. The diamond is an incredibly unusual natural body color green diamond and was discovered before lab irradiation was developed. Since there is no question as to its natural color, it makes for the perfect test subject.

The Aurora Green is the largest Fancy Vivid diamond ever sold. It weighs 5.07 carat and was purchased in 2016 for $16.8 million at an auction in Japan.

The Ocean Dream is a shield-shaped blue-green diamond. Weighing in at 5.52 carats, it was sold for $8.9 million the month before the sale of the Aurora Green. Not only is the Ocean Dream an important green diamond, it is one of the rarest stones in the world due to its size and color combination.

In the correct bright light, the Chopard Chameleon is another famous green diamond. In dim light or darkness the diamond appears yellow, hence the color-changing name. It was discovered in the late 1950s, and paved the way for the creation of the “chameleon” color category for diamonds.

Today, it is possible to irradiate diamonds artificially – that is, expose a diamond to radiation in a lab setting. It is difficult for even gemologists to differentiate between lab-created green diamonds and naturally occurring ones. Scientists have developed a number of tests in order to prove the authenticity of green diamonds.

Some green diamond polishers have started to leave a section of the green diamond unpolished (called “natural”) in order to help gemologists determine the natural origins of the diamond and certify legitimately natural diamonds.

Naturally occurring green diamonds also usually feature radiation stains- small brown or yellow spots on the surface of the diamond- that do not appear on artificially irradiated diamonds. However, these spots are generally polished off of the surface of the diamond when it is shaped and polished. So, their presence (or lack thereof) is not always a clear sign that a diamond has been colored in a lab.

Green diamonds are quite rare, making them a pricey purchase. Within the spectrum of green diamonds, those that contain strong color throughout (known as Fancy Vivid Green) are the most expensive. While clarity is always important in a diamond, the intensity of the color will affect the price much more than clarity or any other factor in a green diamond. There are 9 different color intensities identified in the green diamond spectrum: faint, very light, light, fancy light, fancy, fancy intense, fancy vivid, fancy deep, and fancy dark.

When determining green diamond color, there are three essential criteria:

Even higher on the price scale, however, are those diamonds that combine green and blue, such as the Fancy Vivid Blue Green. While it is not uncommon for green diamonds to include other colors, the combination of green and blue is especially valuable and unique. 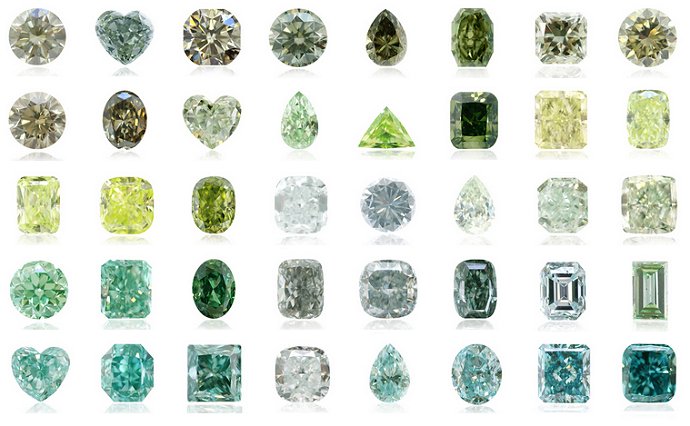 Diamond pricing overall is based on color, carat, cut, and clarity, and while color is the most important indicator of price in green diamonds, the other factors can still influence the price (especially the size).

Generally, the prices for fancy red, pink, and blue diamonds are higher, but green diamonds have been sold at auction houses for over $3.18 million. It is possible to purchase green diamonds with lighter or less saturated color for much less, however, and the wide range of color possibilities in green diamonds allows for occasional moderate pricing.

Green diamonds are usually cut in a variety of fancy shapes, including the pear cut, radiants, and cushion cuts. Round cuts are rarely seen on green diamonds. Round cuts allow more white light to reflect off of the surface of the diamond, and on a green diamond, this can lessen the valuable intensity of the color.

Many green diamonds are placed in gold settings and surrounded by diamonds of other colors.

People have been mining diamonds since approximately 800 BC, and the fascination with the earth’s hardest natural substance has not waned over the years. Colored diamonds especially hold special significance for many inside and outside the world of gemology, appearing everywhere from prestigious auction houses to national history museum exhibits.

The process by which green diamonds are created is just as interesting as the green diamonds themselves are beautiful. These incredible diamonds come in a range of green colors- from light green tinges on the surface to deep green saturation throughout the diamond- and their prices reflect their uniqueness and their beauty.