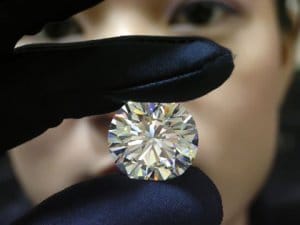 The Diamond Exchange, also known as the Israel Diamond Exchange, is a private company located in Ramat Gan (near Tel Aviv).  It is by far the largest and most high tech diamond exchange in the world.  Inclusive of the corporation are 2800 diamataires (individuals which are highly skilled craftsmen, usually graduates of a Gemological Institution, whose aim is to increase the value and worth of a stone, by cutting, trimming, and polishing a rough diamond to its utmost potential).   It acts as an umbrella organization which helps facilitate the trade of polished diamonds throughout the world.

The Diamond Exchange also has its own internal policies and procedures which regulates conduct for trading, legal matters, security, rules, ethics, and standards for which its members must abide by.   The member diamantaires occupy more than a thousand modern offices (in four separate buildings, also including banks, restaurants, and other supporting businesses:  manufacturers, buyers, exporters, traders, brokers) in which more than 6,500 buyers from around the world come each day to conduct business where they will take the diamonds back to their respective countries.   As soon as they arrive, these diamonds  will eventually be sold to jewelers, and then to consumers.  Contrary to the western culture of business, it is quite common for negotiations to be completed with a handshake and a promise to complete the transaction with honor.

The Israel Diamond Exchange overtook the once dominant Diamond Trading Company (DTC)  Sightholders, the distribution arm of the De Beers Family of Companies.  Since the 1990s, diamond traders decided to bypass the DTC and deal directly with the producers in Russia and Africa. Today., diamond exports in Israel account for approximately $8.9 billion (in 2010), or about 20% of Israel’s industrial exports.  These exports have increased from $2.8 million in 1948, to $8.9 billion today, or about 3190 times, and growing.