Man has been mesmerized by diamonds for centuries. Often little is known about their history. The Hope Diamond, however, is different in that it is not only shrouded in mystery and intrigue, but it also has a complex history that dates back centuries. Although one of the most beautiful diamonds in the world, many people would be hesitant to purchase it since it is said to be cursed.

The History of the Hope Diamond

The Hope Diamond was originally unearthed in the mines of Southwest India along the Kistna River. It was viewed as one of the most unique stones ever pulled from the Golconda mines. So how big is the Hope Diamond? It is believed to have been around 112 carats originally and was placed in the brow of a temple idol.

The next time it was mentioned in texts was when it was stolen by a French merchant who then sold it to King Louis XIV in 1642 at a substantial profit. Shortly thereafter the merchant died a wicked death. After the court jeweler cut it down to 67 carats it was named “the Blue Diamond of the Crown.” During the French Revolution in 1792, it was stolen from the royal family after King Louis XVI and Marie Antoinette were beheaded.

In 1812, the Hope Diamond resurfaced in the hands of London diamond merchant Daniel Eliason but only weighed 45.52 carats. It is said that King George IV acquired it but his debts were so enormous when he died that it was sold. A 1839 gem catalog noted that the next known owner was Henry Philip Hope who gave the stone its name. It transferred to several other owners in the succeeding years.

Properties of the Hope Diamond

The Hope Diamond is classified as a type IIb fancy dark grayish-blue stone that contains a strong phosphorescence of reddish-orange. When it is exposed to ultra-violet light in a darkened room then the lights are turned off, the diamond continues to glow like a hot coal. The strange phenomenon simply adds to its mystery.

Colored diamonds, especially blue ones, have electrical properties that are semi-conducting. Unlike other diamonds, blue ones are renowned for their hardness, thermal and optical properties and chemical resistance. Natural diamonds contain defects or impurities. In the Hope Diamond, the impurity is boron, which gives it its unique color.

The Hope Diamond and others in the Aurora Collection underwent intense scrutiny by the Naval Research Laboratory’s Chemistry Division in 2005 in collaboration with NOVA Research. The objective was to identify the similarities and differences between the gems which included the Hope and Blue Heart diamonds among others. It became immediately apparent that all the diamonds studied had phosphorescent bands that centered between 500 and 660nm wavelengths. What they determined was that the phosphorescence in each gem studied could appear pink, aqua, red or orange. 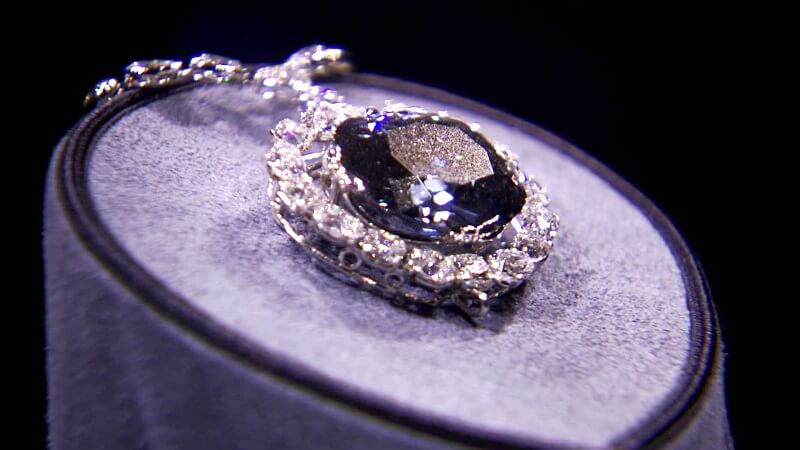 Historically, diamonds had myths surrounding them both good and bad as far back in history as 3500 BC when they were first discovered. Here are a few interesting facts that have been recorded over time:

As for the Hope Diamond, its popularity is partially due to the myths surrounding it:

Where Is the Hope Diamond Today?

The Hope Diamond is currently housed in the Smithsonian Museum of Natural History in the Department of Mineral Sciences in Washington D.C. It was donated by Harry Winston in 1958 and receives over 100 million visitors a year. Unlike its previous history, the Smithsonian has always viewed the stone as a sign of good luck.

People often wonder about the value of the Hope Diamond. According to S.H. Zell & Sons Fine Jewelry in New York, New York the value of the gem is $350 million. According to the Smithsonian, however, it is priceless in that it is irreplaceable. However, in 2009 they insured it for $250 million. The thought most gemologists adopt according to Diamond Cutters International is “How can you set a value on the only one of something?”.

The history, curses and myths surrounding the Hope Diamond is actually a parable about the cardinal transgression of greed. The original thief died a horrendous death while later owners, even though unaware of the curse, went through tragedies and forms of suffering as well. It was only when a pure-hearted person, Harry Winston, donated rather than sell the Hope Diamond to the Smithsonian Institution that the curse was broken.

So what is the Hope Diamond? It is one of the greatest treasures in the world that would have an enormous amount to tell us if only it could talk.