While most of us are interested in getting the best price, there are simply some rings that money can rarely buy. The most expensive diamond rings in the world garner the attention of celebrities, investors, museums and collectors.

The Most Expensive Diamond Ring in the World 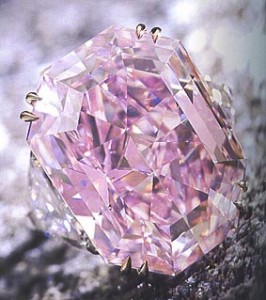 In 2011, the world’s most expensive diamond ring was sold for nearly $11 million at a Hong Kong high-end jewelry auction. Surpassing all other world records, this rare  pink diamond ring is valued at $2.2 million per carat and has set a new first in the Guinness Book of World Records. The pink diamond boasts 5 carats and has two white diamonds on either side, owned by the famous billionaire Laurence Graff. Why so pricey? Pink diamonds are considered “fancy diamonds” and are among the most rare and valuable in the world–and are generally found only in lower carat weights. A diamond of this pure color and magnitude is unprecedented and therefore, unbelievably expensive.

The Next Most Expensive Diamond Ring

A near tie to the fancy pink diamond ring, Christie’s Auction is offering The BVLGARI Blue Diamond which boasts a nearly 11 carat vivid blue center stone flanked with 9.87 carats of triangle colorless diamonds.

Runners Up on the Most Expensive Diamond Ring

There are some incredible diamond rings in the world, and they are usually found at high-end auctions such as Christie’s and Sotheby’s, to name a few. Here are a few runners up in the quest to find the world’s most expensive diamond rings:

This $4.2 million oval diamond ring currently selling at Christie’s New York has a jaw dropping 46.50 carat center stone and flanked with dozens of side diamonds. Not only is its carat weight enormous, but the clarity, cut and color of the stone is superb. Most diamonds with this kind of grading are extremely expensive, so one needs to appreciate how rare it is to have a diamond of this magnitude with so few flaws. Although this picture does not do it justice, one can only imagine how large this center stone is. It is currently for sale through Christie’s Important Jewels New York, with viewing times and auction dates in June 2012.

De Beers, the world leader in diamond production, has this nine carat round diamond set in the finest quality platinum at a cost of nearly $2 million.

For those looking for something more unique color-wise, this Tiffany & Co. Novo yellow diamond has an enormous carat weight of 25.27:

With the recent passing of Elizabeth Taylor, there is no doubt her famous ring will sell for well above the usual price of $1.5 million. Boasting a six carat center stone and another four carats of side stones, this ring is truly spectacular: