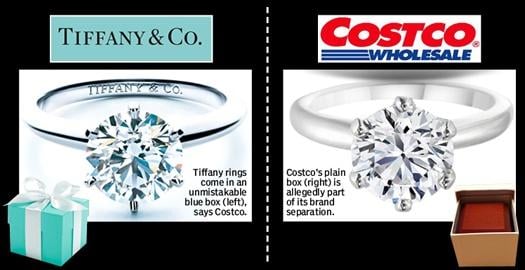 Costco is facing a multimillion-dollar trademark suit filed by Tiffany. The company is trying to determine if the Costco engagement ring is referring itself to the famous New York jewelry store that’s regarded for its blue boxes or if it’s just got its own style with the same name.

Costco rings sell their rings for as high as $40,000; Tiffany & Co. rings begin at $11,000 and increase from there. a 6.5-karat ring was offered on the Costco website for $1 million in 2011. Of course, people who have that kind of cash don’t really shop at Costco to accessorize and buy jewelry.

There are some folks who are unable to repel good deals. Many assume that a Costco ring means you’ll get a better-quality diamond than you’d find and can afford with a prominent store. According to an Olympia, Wash. insurance underwriter Julie Huezo, 32, her husband purchased a $6,500 Costco ring for her in 2010. The Costco diamond was superior to other chain jewelry store diamonds. Huezo said she didn’t care where it came from with the price that was paid for it.

Not everybody feels this way. On the message board for Weddingbee.com, there is a thread regarding the Costco engagement rings. There, most commenters have said they weren’t against the idea but not for them too. One poster said they loved the grocery items at Costco but never looked at their rings. They just may want to think again, considering one can get essentially the same ring at significantly less. The theory was tested back in 2005 by Good Morning America. It appraised a diamond from both Tiffany and Costco and what it learned was this:

Essentially, like every store, the reputation plays a big part in how much something gets sold far. Tiffany has a real reputation for its diamonds, said Shor. So, with the box with the company logo and the diamond brought to you on a pillow, people are definitely paying for the experience. Shor said people who just want to get in, purchase the diamond and get out do have that option too.

This is why Tiffany has brought a claim against Costco. The company said Costco is trying to cash in on its products using the Tiffany name. According to the initial complaint filed by Tiffany, they know there are thousands of Costco members who believe they purchased a Tiffany engagement ring from the popular chain store. Costco, on the other hand, said “Tiffany” is a basic term for the kind of setting that was popularized in 1886 by Charles Tiffany. The term “Tiffany setting” can be found in the dictionary.

Costco won’t re-size rings or do free cleanings and they’re sent home in a beige and red box. Tiffany boxes are famously blue and the store does offer the above services.

At the end of the day, it depends on your budget and how fickle your fiance is on where she gets the ring.