The rose is the most beautiful flower in the world, and it is also known as the “Flower of Love.” Rose Cut style in gemstones has a similar appearance to roses, which is why this style is so popular. The Rose Cut style of gemstones makes a comeback after years of being one of the most popular cutting styles in history. Rose Cut stones were discovered for the first time in the early 1500s and became extremely popular for many years after that, before losing their popularity in the early 1900s. A stone cut is the shaping of a gemstone so that the facets are correctly arranged.

A gemstone’s facet is a geometrical shape that gives it a stunning and attractive appearance and light reflection properties and gives it a proper shape, such as a round, princess, cushion, or another shape. A typical Rose Cut gemstone is distinguished by its unique shape and arrangement, including a flat bottom and an aloft faceted dome with triangular facets forming a jagged point at the center. Depending on the design, the dome is usually in the shape of a pyramid or a hemisphere. The number of triangular facets in a Rose Cut style can range from twelve to twenty-four, depending on the design.

In most cases, it has a lower layer of triangular facets that, when combined with the upper layer, create the appearance of a rosebud on the surface. In the upper layer of facets, these are referred to as star facets, and in the lower layer, these are known as diagonal facets. In the lower layer, these are referred to as diagonal facets. The middle section is typically composed of six triangular facets that come together at a central point.

A round gemstone with a rounded cabochon is also available in other shapes such as ovals, hexagons, and pear shapes. Facets are typically arranged in multiples of six unless otherwise specified. This gemstone has a flat base without a distinctive contraction body. The top is elevated in a faceted dome, with anywhere from three to twenty-four triangular facets used to impersonate the tighter coil, depending on the size of the stone. Rose-cut stones reflect the light that is reflected off their surroundings. 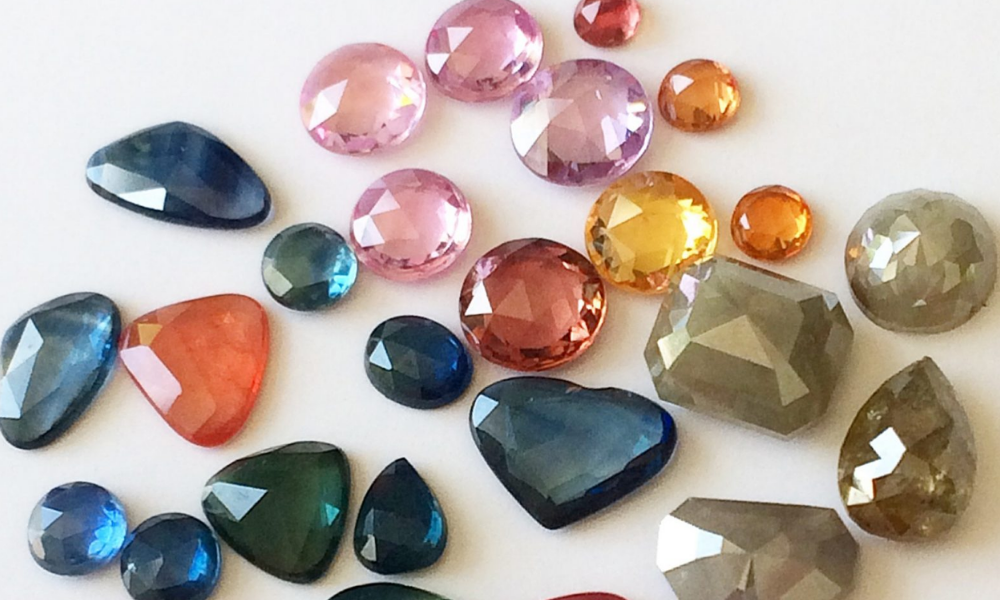 What is Rose Cut Gemstone?

This method of faceting gemstones has the base of the stone being wide and flat with no facets while the top of the stone is domed and covered with triangular facets is known as rose cutting. The facets are frequently arranged in two rows so that the very highest part of the stone terminates at a point, which is expected. Once famous for diamonds, this cut style is now only found in smaller stones due to its limited popularity.

Giacomo Tagliacarne and Giovanni Dell Corniole were two of the most well-known diamond cutters in the world at the time of their deaths. Both of these individuals were masters of the art of faceted gem cutting. It is preferable to use a spherical gemstone for the Rose Cut because. More efficiently brought out the facets, and it was much easier to polish than it would be to use a flat-shaped gemstone. These Rose Cut gems are again in high demand, thanks to the burgeoning demand for fashion jewelry. They are the best deal you can offer your loved ones because they will demonstrate your affection and tender care for them, but they will also protect them from all dangers.

There is a distinction between an antique jeweler and a modern jeweler. Whereas antique jeweler reflects our culture, the modern jeweler is a form of fashion jeweler in its own right. The rose cut has provided the wearer with both forms in a single piece, a unique feature. These are both antique and modern fashion jeweler pieces that are extremely popular among young people and women. Because of their one-of-a-kind and sparkling nature, they have a distinct and endearing presence on their own. When combined with diamonds and other precious and semi-precious gems, they become one-of-a-kind pieces admired and adored by all. Even though they are expensive, they still represent the best value because they are in high demand these days and are also highly regarded.

In most cases, the Rose Cut is restricted to a specific category; however, because of the facets inherent in the shape and nature of the diamond, their allure is enhanced even further by the sparkle of the diamonds used in their creation. These rose-cut stones require special attention because they are delicate and can be damaged or chipped from the faceted sides of the stone. This collection of stones is for those who believe that their individuality can positively impact others, as they are the original focal point of an artisan’s devoted work. In color gemstones, however, the Rose Cut is also famous.

They are becoming increasingly popular in the modern fashion of colored stones, which has taken hold of this style. There are numerous pieces of its mesmerizing crystals on display, which are used as ornaments, polished and cut into gemstones, or carried, in their natural form. It is believed to be a stone that aids in the establishment and maintenance of a sense of nurturing love among family members and the exudation of a sense of harmony and love; it also aids in reducing negativity in the home.

The rose-cut Gemstone was most popular during the Georgian (1754-1768) and Victorian eras when it was paired with other diamonds (1840-1900). Observe that the rose diamond is frequently encased in a circle of precious metal and set with the facet facets facing outward when looking at jewelry from these eras.
This is a markedly different appearance from contemporary jewelry, in which the facets are typically facing the back.
Necklaces, rings, and earrings were made out of these diamonds by the ladies of the era, with rose-cut diamonds draping the entire ensemble. It is extremely rare to see a rose-cut diamond on its own unless it is part of an engagement ring, which is the exception.
After the introduction of brilliant-cut diamonds and other cuts in the early 1900s, the popularity of rose-cut gemstones began to wane. True, vintage rose-cut diamonds are difficult to come by, but with the growing market for buying and selling vintage gemstones, more and more are becoming available.

A bowl of water with a few drops of ordinary dish detergent and your gemstone jewelry is the most effective cleaning method. Scrub gently behind the stone with an old, soft toothbrush to remove any accumulated dust or soap. Afterward, rinse with water and pat dry with a soft cloth.

It is also possible to clean other hard gems with the traditional combination of warm water, dish soap, and a soft toothbrush. You can, however, clean them with a glass cleaner if necessary. It is possible to clean gemstones with the baking soda mixture described above and the ammonia trick. Previously used to clean metals.

What is the Process of Cutting Gems?

All gems are cut and polished using progressive abrasion, which involves using finer and finer grits of more complex substances to cut and polish them. Despite being the hardest naturally occurring substance on the planet, diamond has a Mohs hardness of 10. It is used as an abrasive to cut and polish various materials, including other diamonds.

What is a Rose Cut Garnet, & How Does it Differ From Other Garnets?

Garnet gemstone cabochons with a rose-cut design have a faceted top and a flat back. They are available in various popular sizes ranging from 1.0mm to 8.0mm in round cut or 6x8mm to 8x12mm in oval cut, with the round cut being the most popular. These are almandine garnets that have been hand-cut and have a lovely red color. Because they are hand-cut, there is a tolerance range for them.

What is a Double Rose Cut, & How Does it Work?

Double rose-cut diamonds, also known as double Dutch cut diamonds, have a design on the crown and pavilion meant to resemble a rose’s petals. It has a domed top and bottom, with flat facets on the sides and bottom. Double rose cuts are a vintage-style diamond that has a similar appearance to a briolette cut in shape and size.

What Was the Worth of a Rose Cut Diamond Was?

For example, a 6.5mm brilliant cut diamond will typically weigh around 1.00 carat, implying that it will sell for between $6,000 and $7,000 on today’s market (though the price can vary from $2,000 to upwards of $20,000 depending on quality) Having said that, a rose-cut diamond that is also 6.5mm in diameter may only weigh about a carat total.

What is the Best Way to Clean My Gemstones?

It is also possible to clean other hard gems with the traditional combination of warm water, dish soap, and a soft toothbrush. You can, however, clean them with a glass cleaner if necessary. It is possible to clean gemstones with the baking soda mixture described above and the ammonia trick. Previously used to clean metals.

There are many different unique and fancy shapes found in Rose Cut gems, but the term “rose cut” encompasses a wide range of shapes and styles, which allows cutters to offer a much greater number of options when it comes to this particular cut. The post-Day Valentine’s adoration for rose cuts arrives almost too late. The remaining population of vintage rose cuts has dwindled to such a low level that it would be foolish to expect this cutting style to be removed from the endangered species list. Vintage rose cuts are so hard to come by these days, especially clean and in good condition, that designers hoard the few they can find until they have enough stones to create pieces that feature them exclusively.