Skip to content
The rose cut is an antique shape that dates back to the 15th century and was very popular throughout the Victorian era. It is a dome that has 3 to 24 facets that come to a gentle point at the top. This gives it the shape of an opening rosebud.

Because the rose is a symbol of love, a rose cut diamond set on a band was often used as an engagement ring. The shape was eclipsed over time by the advanced technologies that led to the brilliant and other cuts. However, it’s still popular with people who seek vintage jewelry. Rose cut diamonds are said by the wearers to be especially beautiful by candlelight.

History of the Rose Cut Diamond

Some historians believe that the rose cut originated in India in the early years of the 15h century and the technique was brought to the west. Others believe that Lodewyk van Bercken perfected the cut. Van Bercken was a diamond cutter from Bruges, Brussels and the inventor of the scaif, which is a wheel used to polish diamonds with perfect symmetry. Since diamond can only be cut or polished by another diamond, the scaif uses diamond dust lubricated with olive oil. It allows all of the facets of a diamond to be precisely polished in ways that brought out their brilliance and life, which is the term for reflected light. The diamond is held in a drop, which is simply a holder, and polished by the rapidly spinning wheel.

When Charles the Bold, the Duke of Burgundy heard of van Bercken’s invention, he sent him three large stones to polish as best he could. The resulting gems pleased the Duke, who rewarded the jeweler with 3000 ducats. Van Bercken then settled in Antwerp, which was already famous for the skill of its jewel cutters and the beauty of its rose cut diamonds. It was there that he cut the “Sancy” diamond, which had been brought from India as a rough stone.

Other names for the rose cut invoke the perfection it achieved in Holland. Among them are the Antwerp Rose, the Full Holland Cut and the Dutch Cut.

Properties of the Rose Cut Diamond

However it is cut, diamond is the hardest natural substance on earth. It has a Mohs scale rating of 10 on the hardness scale. When it is shaped into the rose cut, it is not as fiery as a brilliant cut diamond, whose form was perfected during World War I. Still, for centuries the rose cut diamond could be seen not only on rings and necklaces but on the hilts and scabbards of swords, on vitrines, epaulettes, picture frames and even harnesses.

Though most rose cut diamonds are round, they can come in many shapes, including marquise, briolettes, pendeloques, beads, pear shapes and spheres. The Holland Rose has facets in two rows, while the Brabant Rose has twelve facets or less. The Double Dutch Rose is faceted above and below to create the appearance of two rose cut gems. This type of diamond cut was especially popular in the 19th century. Some rose cut diamonds were refaceted to become brilliants. 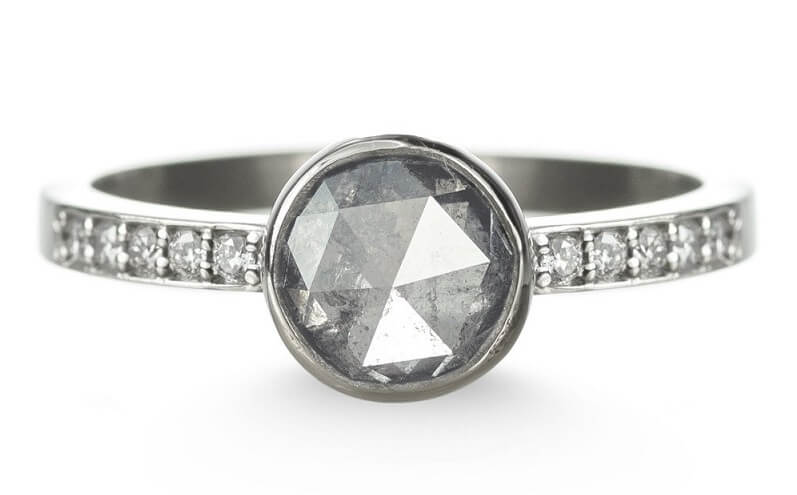 Like all diamonds, the rose cut diamond is a symbol of purity whose light can bring a person’s life into an integrated whole. It brings love and clarity into relationships and enhances the love of a husband for is wife. It’s a symbol of commitment and fidelity. It has been the symbol of wealth for thousands of years, and wearing a diamond, especially a large one, attracts abundance. A large diamond undoes the damage that might be done by cell phones by blocking electromagnetic stress.

A diamond amplifies energy and does not need recharging. Indeed, it brings more energy to whatever it comes into contact with and amplifies the power of other crystals. However, this power needs to be used carefully, for diamond can enhance negative as well positive energies. It fills in holes in a person’s aura and regenerates it. It cleans the aura and allows the light of the soul to shine. Diamond actuates the crown chakra and connects it to divine light.

Diamond gives the wearer fearlessness, fortitude and a sense of invincibility. It removes emotional pain, brings new beginnings and stimulates the imagination and creativity. A diamond serves as a link between the person’s intellect and their higher mind. It clears the mind and makes way for enlightenment.

Physically, a diamond helps with glaucoma and visual problems and fortifies the brain. It helps with allergies, chronic diseases and an unbalanced metabolism. Traditionally, diamonds were used to defeat poisoning.

The rose cut diamond should be worn next to the skin or placed on the area that needs healing. It is best worn in earrings.

One of the most famous rose cuts was the Great Mogul Diamond, which belonged to Emperor Shah Jihan of India. It was seen and described by Jean Baptiste Tavernier, the French jeweler in 1665. This diamond was supposed to have weighed 280 carats after being cut from a rough diamond that weighed 787.5 carats. The Great Mogul was lost in the 18th century. However, some people speculate that it a turned into the Orloff diamond or the Koh-i-Noor diamond.

The Sancy diamond (a double rose cut) polished by Lodewyk van Bercken is a yellow diamond that weighs 55.23 carats. It belonged to Charles the Bold and passed onto many owners after his death. At one point it was found in the stomach of a courier who swallowed it rather than allowing it to be stolen by brigands. We can now find it at the Louvre Museum.

The Florentine or Tuscany diamond was also a yellow diamond that weighed 137.27 carats and was formed into a Double Rose cut. It too was cut by van Bercken, and the Duke of Burgundy was said to be wearing it when he was killed in 1476 at the Battle of Morat. It was lost sometime after 1918.

Though it’s not as flashy as a diamond with a more modern cut, the rose cut diamond is prized for its more subtle beauty. Rose cut diamonds are enjoying a rise in popularity. They can now be bought at quality jewelry stores or online.