Are you looking out for pertinent information regarding July Birthstone? If yes, this article will guide you to understand more about July Gem. The July birthstone is associated with the term ‘Rubies.’ In ancient India, rubies were known as the “king of precious stones” because of their scarcity, hardness (second only to diamond), beauty, and magical properties.

Ruby was a symbol of vigor and youthful energy in Indian Jewellery, related to the life force blood for a long time. Some believed this July birthstone might foresee tragedy or danger in the past, while others claimed it could cure inflammatory disorders and calm wrath. This article, specially written on July birthstone, can find the most detailed facts about the stone. Moreover, feel free to contact me for any related queries. 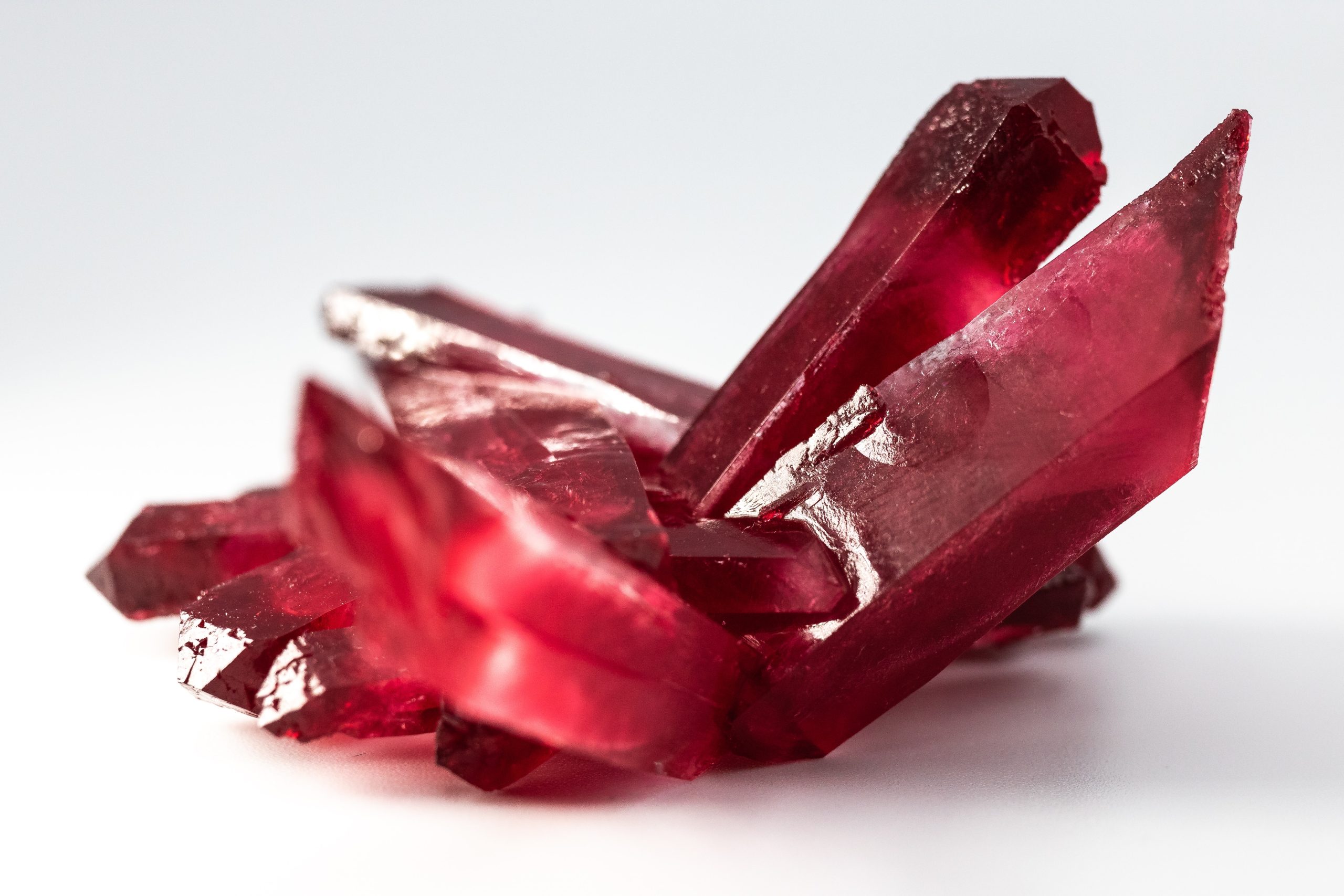 What Is The Origin Of July Birthstone?

A ruby, gleaming and brilliantly red, has a scientific explanation for its brilliance. The chromium in a ruby gives it its brilliant red color, but it also gives it the dazzle and sparkle of a dazzling glow. The Ruby was given the name Rubeus, which means red, in Latin. This name was given to it only because of its great hue.

Ruby, the July Birthstone, is one of the most valuable stones in the gemstone industry. In most civilizations worldwide, it is a traditional gemstone for July. Continue reading to learn more about what makes this lovely stone so unique! Ruby, the red July birthstone, has long been regarded as the most valuable gem in the Hindu pantheon.

It was given the name ‘King of Gems’ in honor of its bloodred intensity, which was thought to protect the wearer from Evil. It also connotes deep affection and passion. Warriors used to wear rubies on their skin or even implant them because they felt the July birthstone symbolized power and protection. Because rubies are the second hardest gemstone globally (after diamonds), it’s no surprise that they’re associated with protection.

Apart from the ancient Hindus, tribes from all over the world were drawn to this stone, which was associated with combat and triumph due to its rich red hue. Ruby’s characteristics are harmony, satisfaction, integrity, strength, protection against Evil, and success.

Ruby’s July birthstone is a stone of courage, boldness, and self-confidence. The stone is known for its purity, making it ideal for people who need to overcome challenges and gain confidence. Onyx is considered a protective stone and is also believed to increase physical strength. It’s red/orange color mimics the color of fire and is often used as tableware and flower vase. Its meaning is similar to that of its sister stone, sapphire.

The Ruby is associated with the life force and the vitality of blood. It enhances awareness and builds courage. It is said to bring success in battle, wealth, and love. It is the birthstone of July. It is traditionally given as a gift on the 15th or 40th anniversary of marriage. Its color can also bring good luck to a new baby. Rubies are famous as jewelry in the middle-aged, as they are often found in old-fashioned jewelry.

The July birthstone, carnelian, comes in various colors, including red, yellow, and orange. They can also be stripped. Typically, they are polished to a high luster. Carnelian is said to improve energy levels and passion. It is said to connect to the sign Aries. Onyx is another stone with meaning in July. It is a grounding stone. Some varieties have bands, while others are smoky, gray, or even black.

The deep red color of Ruby is also associated with courage and ambition. Ancient men believed that wearing the birthstone evoked love and passion. In addition to its protective qualities, the stone is believed to protect the wearer from evil and danger. Its red color increases the wearer’s confidence and helps them navigate social situations.

What You Need To Know More About July Birthstone

Aside from rubies, the July birthstone is also said to boost psychic vitality.

The idea has changed over time, and the stone is now thought to assist users in making critical life decisions, particularly financial ones.

The Ruby birthstone was associated with Hindu tradition’s passion, protection, and strength. Ruby was also utilized to increase blood circulation and was thought to have medicinal effects. The notion, however, is that a Ruby should not be worn near the solar plexus since the stone has adverse effects on this location. Courage, leadership, confidence, vigor, and strength are all represented by the bloodred stone. It’s also linked to feelings of love and desire. It brings happiness and success in life, particularly in love and romance.

Heat treatment is commonly used to remove purple tint from rubies, resulting in a purer red. The procedure can also remove “silk” or minute needle-like impurities, making a gem look lighter in tone and opaque. Heat treatment is commonly accepted in the trade since it is resistant to natural wear and tear. On the other hand, Rubies can be treated with lattice diffusion and dyed. Surface-reaching fractures and flaws in lower-quality material may be filled with glass to reduce their visibility and make the gem appear more translucent. These treatments may increase Ruby’s susceptibility to harm during routine wear and care.

What Are The Varieties Associated With Rubies?

Rubies, like humans, are found all over the world and have a variety of backgrounds, traits, and distinctions. The Burmese ruby stone, for example, is well-known as one of the best ruby stones available.

It’s not uncommon to see an imperfection mark on rubies like these, as this might indicate that the Ruby was created organically. The African ruby stone is another type of Ruby found across the world, and it has a deeper color.

There are stones from Madagascar, Tanzania, Afghanistan, and Thailand, among other places. Thankfully, the capacity to make exquisite rubies made from the same chemical ingredients as genuine rubies is also available.

What Is The Jewellery Made Out Of Rubies?

Now that we’ve covered the July Birthstone rubies let’s talk about fan-favorite ruby jewelry! When it comes to wearing this iconic red gemstone, there are many alternatives, including ruby rings, ruby necklaces, and ruby earrings. These unique goods will pique your interest, especially in July, if you were born (or had loved ones born).

Ruby rings provide a glint to every finger they touch. Oval Ruby and Diamond Halo Engagement Ring This engagement ring, centered on a genuine oval ruby gemstone, is guaranteed to dazzle and wow your true love (mainly if they were born in July). This ring has a halo setting with gorgeous diamonds, and it’s set in a lovely 14 carat rose and white gold.

Double Split Shank Ruby and Diamond Halo Ring A characteristic round ruby gemstone is surrounded by round-cut diamonds. The item is set in a gorgeous 10 karat rose gold setting. Because this is a one-of-a-kind ruby ring,

There are various ways to allow traditional ruby gemstones to gleam when worn on the wrist, whether a trademark tennis bracelet or a bolo design. Bracelet with Ruby and Diamond Halo This bracelet, set with beautiful round-made ruby rubies, is the ideal birthday present for a mother, sister, or loved one born in July. Tiny white diamonds surround the July birthstone, set in sterling silver. While many people believe that the attraction of a bolo bracelet lies in its customizability and size, we have to say that the inclusion of round ruby gemstones and wonderfully wrought sterling silver are the reasons we adore this one.

Wear the Ruby around your neck to show your shine and protection, just like royalty. Necklace with Ruby and White Zircon Bars alternating. For those who want Jewellery with basic geometric shapes, this ruby jewelry item, which has alternating square rubies and white zircon gemstones, may be worn for any occasion and is incredibly adaptable. The best part is that this necklace is made of sterling silver.

Ruby earrings, a timeless classic, nothing says elegance and luxury like a face framed in shimmering crimson jewels. The July birthstone, Ruby, is a stone of countless symbolic meanings. Its name, “ruber,” is derived from ‘rubrus.’ It has been known to represent courage, protection, and a healthy body and mind. A ruby’s connection to the heart and bloodstream has many symbolic associations. It symbolizes love, creativity, and success. So, if you are born in July, consider giving yourself a ruby as a jewelry item.

Where Can You Find Rubies?

Our search for the July birthstone begins in Myanmar (formerly Burma), one of the world’s oldest known sources of exquisite rubies. The Mogok region of Myanmar has produced some of the most sought-after rubies for over five centuries — brilliant red beauty softened by light-scattering inclusions and a glowing crimson brilliance. Weathered marble and antique Buddhist temples abound in this region.

Vietnam has been a significant source of the July birthstone since the late twentieth century. Rubies of red to purplish-red color are produced in the Luc Yen region of northern Vietnam, where rainforest-clad mountains rise over large paddy fields. The QuyChau area, further south, has also produced several superb rubies. Today, artisanal miners sift through the soil, searching for a gem that will change their lives. The birthstone for July comes from Mozambique, which is a very new source. The Montepuez mines are located in this African country. Rubies discovered there had been compared to Mogok’s famous stones.

In ancient times, it was believed to represent manhood and nobility. Men wore ruby rings to inspire love in women. As July’s birthstone, it represents courage and passion. Since the beginning of time, the gemstone has been around and is the color of the collision of two continents. Its rich history and unique colors have inspired the creation of a wide variety of modern jewelry.

The July birthstone is the Ruby. Its name derives from the Latin “ruber” and means “red.” This color symbolizes love and passion. The most beautiful Ruby is a deep red with a hint of purple, or pigeon’s blood. A variety of corundum is the mineral that gives Ruby its red color. In some types of Ruby, trace amounts of chromium are present in the stone. The more chromium in the stone, the more intensity, and the red. Its rarity made it popular among ancient Indians. The gem is so rare that it is compared to the famous Mogok gems.

Ruby’s July birthstone is a red-orange gem with the Cancer sun sign. The ancients called the gem Rajnapura because it radiated an internal flame associated with love and passion. It was discovered about 2,000 years ago and had many different meanings. For example, the famous Blood Red ruby in the movie Bloodstone was a ruby, and it was a famous birthstone.

The July birthstone may usually be cleaned safely with warm soapy water and a soft brush. Untreated, heat-treated, and lattice diffusion–treated stones are usually safe with ultrasonic and steam cleaners. Only a moist cloth should be used to clean glass-filled or colored stones.

So, this article is all about birthstones and how rubies are associated with July. Always check to see if your Ruby has been treated and how. According to the Federal Trade Commission, treatments that impact a gemstone’s perceived value must be disclosed. A GIA Identification Report can help determine if a stone is natural or manufactured and whether it has been treated in any way.