You might follow the rules about your zodiac sign and birth month. Most people follow birthstone norms in their daily lives for spiritual satisfaction. If you want to know about the May 7th Birthstone and its brief understanding, you can follow up on this article. The Emerald is the current and official May birthstone; hence the May birthstone color is green.

Birthstones and their vibrant colors have long been linked to your birth month and are rare and distinctive gemstones. They make a thoughtful gift for a particular occasion for a mom, a friend, a husband, or a family member. But, as you’ll see below, they’re much more than that. This article will enable you to make more sense of understanding May Birthstone. 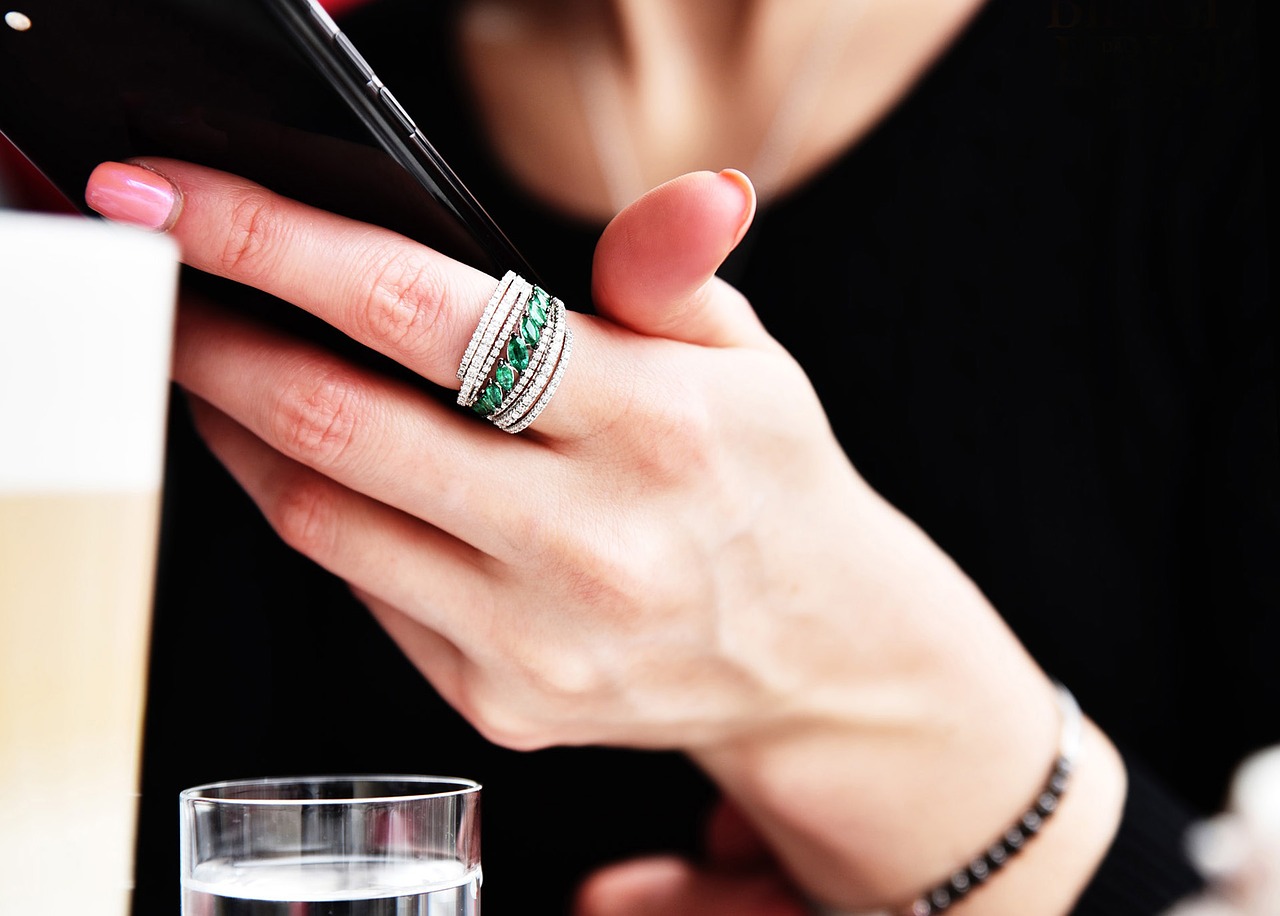 What Is The Chronology Of Emeralds?

Emeralds have a long history dating back to antiquity. In Babylon and Egypt, they were worn by kings. In Egypt’s emerald mines, tools going back to the reign of Ramesses II have been discovered. The emeralds used by Queen Cleopatra were said to come from mines near the Red Sea in southern Egypt.

The conquistadors witnessed indigenous rulers wearing emeralds when they initially arrived in South America from Spain. During the invasion, they took significant amounts of emeralds from the Peruvians, although the source of the emeralds was never located. The Spaniards then discovered Chivor in Colombia in 1537, which is today home to a significant emerald mine. Following the defeat of the Muzo Indians, they also took over the Muzo mine. Since the Spanish invasion, mining operations in Muzo have continued nearly unabated. It is Colombia’s most famous emerald mine, and it is claimed to produce the best emeralds in the world.

What Does Emerald Lore Mean?

Emeralds were used to create several well-known historical items. The Crown of the Andes claimed to be made of emeralds and worn by Atahualpa, Peru’s final Inca (king), is one of them. The crown has around 450 emeralds weighing 10 ounces (1523 carats).

The Emerald has a lot of myths around it. The stone was initially thought to be capable of preventing epilepsy, stopping bleeding, curing diarrhea and fever, and protecting the wearer from panic attacks. Its beautiful green color was thought to calm and relax the eyes. Emeralds were devoted to the goddess Venus by the ancient Romans because the green Emerald reflected nature’s reproductive forces. Early Christians regarded it as a symbol of Christ’s resurrection. Finally, emeralds were thought to have the ability to predict the future throughout the Middle Ages.

Emeralds are most commonly found inside a fine-grained sedimentary rock called shale. Changes in the physical environment, such as pressure and temperature, have produced recrystallization in emerald-bearing shale. Colombia produces the most significant and best emeralds in the world. Around 1830, they were also discovered and mined in the Ural Mountains of Russia. In the United States, emeralds can be found in North Carolina. Around the world, they also occur in Zambia, Brazil, Pakistan, Norway, Austria, India, Madagascar, and Australia.

What Is The Color Of My Birthstone?

The color green, which is May’s Birthstone, represents the regeneration of life in spring, which begins in May in the northern hemisphere. Emerald, one of the four precious gemstones and one of the rarest and most valuable gems, is the Birthstone for May.

Emeralds are a type of beryl, and their brilliant green hue is due to trace quantities of chromium or vanadium. Emerald crystals form over millions of years. While they can form under various geological conditions, the occurrence of all of the necessary components in the same area is infrequent. Hence Emeralds are only found in a few places.

In culture and lore

The 16th-century historian Brantôme related one of the more charming emerald legends, referring to the many beautiful emeralds the Spanish under Cortez had brought back to Europe from Latin America.

Inter NatosMulierum noncurrent major (“Among those born of woman, there hath not arisen a greater,” Matthew 11:11) was etched on one of Cortez’s most famous emeralds, referring to John the Baptist. Brantôme thought engraving such a beautiful and detailed natural object was sacrilegious and blamed it for Cortez’s loss of a priceless pearl (to which he dedicated a work, A beautiful and incomparable pearl), as well as the death of King Charles IX of France, who died soon after.

The goddess Meenakshi, whose idol is traditionally made of Emerald, is the chief deity of India’s most famous temple, the Meenakshi Amman Temple in Madurai.

It is also a symbol of rebirth, representing renewal and Spring in the northern hemisphere. Beautiful and vivid greenstone emeralds are rare and expensive, so it is best to invest in a piece that represents your personality and style. However, if you can’t afford to buy one, you can always make your own.

The opal is the May 7 Birthstone. It gets its name from the Greek word opallios, which means “to see.” It forms when water collects silica dioxide and deposits it into cracks and cavities in rocks. Most opals are produced in Australia, but they are also produced in other parts of the world. If you want to get one for your loved one, it’s wise to consult with a professional.

What Are The Alternates Of May Birthstone?

Agate: Agate, a striking banded stone in various colors, is May’s traditional alternative Birthstone. Agate is a form of quartz that can range from transparent to opaque and is found inside hollow rocks (geodes) within volcanic rock. Agate slices are frequently used as decorative pieces because of the gorgeous banded patterns in various colors. Agate can be found on every continent. However, it is usually mined in South America.

Chrysoprase: Chrysoprase, a green gemstone, was recently included as a second alternative birthstone for May. Chrysoprase is a type of chalcedony that contains minor amounts of nickel and comes in various colors, from apple green to deep green. Chrysoprase of the highest quality was found in Poland and the Czech Republic. However, in the 1960s, a deposit in Queensland, Australia, was identified, becoming a major supplier of Australian jade. Germany, Russia, and the United States are among the other countries. This gemstone’s translucent, even structure and hue make it suitable for beads and cameos.

What Is The Significance Of Emerald For May?

The significance of this Birthstone is clear, as evidenced by its rarity and high value among ancient civilizations. But why is it the May birthstone? It’s because it’s been associated with life and the sensation of Spring in many civilizations. Therefore, this gem has been the most appropriate way to represent life and rich green scenery from the Emerald Isles of Ireland to Seattle’s ‘Emerald city.’

My birthday’s lucked out. One of the best months when it comes to weather, the final month of school before Summer comes, and one of the most iconic of all gems and birthstones

How To Keep Emerald Clean?

Emerald has a Mohs hardness of 7.5 to 8, making it more scratch-resistant than a diamond, with a hardness of 10. Treatments to increase the color or clarity of the May birthstone are common. The following are examples of standard treatment methods:

Avoid heat, changes in air pressure (such as in an airplane cabin), and strong chemicals when working with the emerald birthstone. Never use an ultrasonic cleaner on an emerald because the vibrations and heat might cause the filler to sweat out of fractures. In addition, exposure to hot water used for dishwashing can potentially harm filled emeralds. The safest way to clean emeralds is to use a soft brush and warm, soapy water to cleanse them gently.

Emeralds have tiny gardens within them: In a way, yes! Emeralds, like diamonds and other jewels, have natural inclusions. However, the inclusions’ faint moss-like look is frequently referred to as ‘Jardin’ – the French term for ‘garden’ – in emeralds. In addition, inclusions and microscopic fractures are frequent in emeralds, and oiling them is a popular process that helps to minimize the visual impact of these internal characteristics.

Stars in the spotlight: A trapiche is a unique emerald with a six-pointed star blooming from its center. Trapiche emeralds are formed as the beryl crystal expands, with black carbon filling the Emerald’s crystal connections, forming a radial, star-like pattern. As a result, they can be enormous, weighing several grams in some cases.

The Birthstone for May is well suited to the celebration of life growing all around us. But, of course, we were bound to fall under the spell of Emerald because of its lush green tones. Around the planet, productive mines ensure that people who adore green or were born in May will remain captivated. So you may now treat yourself – or a loved one – to an emerald that embodies the season’s vigor. Emeralds are not only the Birthstone for May, but they are also associated with long and happy marriages. Emeralds are exchanged in honor of 55th wedding anniversaries, symbolizing the rarity and value of such a lengthy relationship.

All gemstones have positive connotations, but Emerald has a particularly long history. It is said to provide inner peace and knowledge to the wearer and be resilient and attract love. Moreover, people used to put emeralds under their tongues to help them see the future, which gave origin to Emerald’s reputation as the stone of truth.’

A Brief Note on May 7 Birthstone

The Emerald is the Birthstone for May. This green gem is the world’s most valuable and beautiful gemstone. Emeralds come in a variety of colors, from yellowish to pure green. The most expensive green emeralds are pure green. The following birthstones are suitable for this month. These stones have many fascinating myths and stories associated with them. You can learn more about each

This stone is always green. It belongs to the beryl family, including aquamarine, heliodor, and morganite. It contains beryllium, silicon, and aluminum and is a six-sided symmetric crystal. Emeralds can be light green or dark green, depending on the type of crystal. When heated, they can lose their color and become opaque. A beautiful piece of jewelry made from this Birthstone will be an excellent gift for the May 7 birthday girl.

The name derives from “smaragdus,” meaning ‘green.’ It is also one of the four precious gemstones. Emeralds can range from yellow to orange and are found in only a few locations. The Emerald’s color is due to trace elements of chromium, vanadium, and oxygen.

It is a very rare gemstone that comes in a wide variety of shades of green. Brazil is the world’s largest supplier of Emeralds. Because emeralds have no inclusions, they are more expensive than diamonds of the same weight. However, the Emerald is also associated with great vision, intuition, and wisdom, making it a popular choice for jewelry and beauty products.

The color green symbolizes renewal in the northern hemisphere, the year’s first month. This color is a variation of Emerald, one of the four most precious gemstones in the world. An emerald is a form of beryl, a mineral with a yellow-green hue. Its blue-green shade is due to trace elements of chromium and vanadium.

The Emerald is a beautiful, rich green gemstone. It is a member of the beryl family. It is a six-sided symmetrical crystal that contains beryllium, aluminum, silicon, and iron. Its green color changes from green to blue as it ages, making the May 7 Birthstone an exceptional stone.