Diamonds have an undeniable reputation as one of nature’s most beautiful creations. But diamonds also have a reputation for being extremely expensive. It’s little wonder that people want cheaper alternatives to diamonds. White topaz and moissanite rank as two of the most popular options for fake diamonds. These gems are similar enough that it can be difficult to decide on the superior option. We’ll compare all three gem types to solve the white topaz vs moissanite debate. 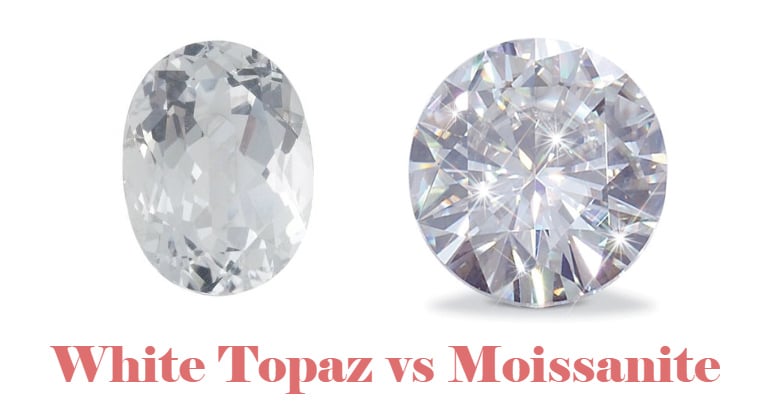 More commonly the gems will develop some measure of impurity from the environment when forming. The gems will still be quite beautiful. But they can develop a tint or cloudiness as a result of these impurities. The same is also true for naturally formed moissanite. However, most moissanite on the market is artificially created.

While moissanite is a fully natural substance, it’s far more economically sound to recreate rather than mine it. People might come across naturally formed moissanite on occasion. But natural moissanite is incredibly rare. In comparison, artificially created moissanite is very common.

It’s usually safe to assume that discussions about moissanite will focus on artificial rather than natural forms. Assuming moissanite came from an artificial source makes comparisons far easier. Artificially created gemstones seldom shows any significant level of impurity. The white topaz vs moissanite debate regarding color is an easy win for moissanite.

Diamonds tend to have a sparkle which makes it stand out among any other type of stone. The reason it’s so unique is that sparkle consists of three separate properties. White light reflects back from the diamond. Light refraction within the diamond creates a rainbow effect. And the diamond’s surface effects create scintillation. Matching three properties is obviously a more difficult task than simply facing off against a single item.

Moissanite has a very different faceting pattern than diamonds. The difference is hardly noticeable in smaller gems. But larger cuts of moissanite can be more easily distinguished from a diamond by the sparkle.

A white topaz has a similar sparkle to that of a diamond. It has one big drawback though. A white topaz is more easily damaged and dirtied by the environment. This can quickly degrade the shine of a white topaz.

The white topaz vs moissanite debate is less clear when looking at sparkle. Moissanite offers an enduring sparkle, but one which can distinguish it from diamonds. While a white topaz has a more authentic sparkle that can degrade. Moissanite comes out slightly ahead because the smaller sizes can disguise the differences in sparkle.

Diamonds showcase their sparkle through brilliance. This brilliance is an easily measured value which makes comparisons fairly simple. A diamond will typically have a brilliance refractive index, or RI, of 2.4. The RI of a white topaz is 1.6. This places it significantly lower than a real diamond. Moissanite contrasts this low rating with an RI score of around 2.7.

The white topaz vs moissanite comparison shows that moissanite is more brilliant than white topaz. Moissanite even scores high enough on the RI scale to surpass real diamonds.

Diamonds are one of the hardest substances on earth. This durability can make it easy to distinguish diamonds from many types of fake diamond. The Mohs Scale of Hardness measures a gemstone’s strength. Diamonds rank on the extreme end of the scale with a rating of 10.

Clarity is a description of a gem’s internal imperfections. Gems form naturally over a lengthy period of time. A side effect of this process is occasional minor imperfections. These imperfections can be so small that they’re invisible to the naked eye. Diamonds and white topaz will usually have analogous imperfections.

When people think of a diamond’s shape they’re usually thinking of the gemstone’s cut. The cut of a stone is what provides the overall shape. Since some level of artifice is inherent in a gem’s cut the comparisons are fairly easy.

A gem typically has no inherent limitation on the style of cut. Different cuts will produce some minor variations in each gem’s appearance. But when mounted in jewelry the differences fade to an insignificant level. This gives a solid tie for white topaz vs moissanite when examining their cut.

Diamonds are among the most expensive gemstones. Both moissanite and white topaz can be had at comparably inexpensive costs. Market fluctuations and overall quality of a stone will also impact price.

Averaging the gemstone’s prices gives a general cost of around $55 per carat for white topaz. Moissanite is far more expensive, averaging out at around $480 per carat. White topaz is the clear winner when comparing the options by price.

A decision about the best fake diamond should weigh all these factors. Moissanite comes ahead in most categories. It even surpasses diamonds on the brilliance ranking. This might seem to suggest moissanite as the clear winner.