Without question, one of the most popular colored diamonds are the yellow diamonds.  They are a unique and beautiful stone of choice for celebrities, politicians and fashion gurus. Sometimes all it takes is to see pictures of  celebrities with certain jewelry styles to get inspiration for your future engagement ring or jewelry. 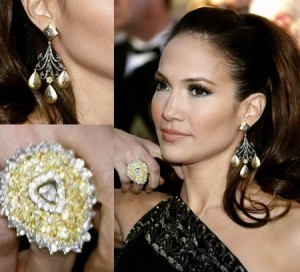 At the fashionable charity benefit  “Raise Your Right Hand Ring for  Africa”, Lopez  wore an astounding 30  carats of yellow diamonds. She is  reported to love these  yellow stones,  as her husband Marc Anthony gifted  her with an 8 carat canary  ring at the  birth of their twins. With recent news of their pending divorce, will she keep the ring? 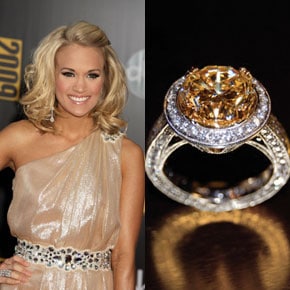 Carrie Underwood has been sporting a  gorgeous 5 carat yellow diamond since hockey star Mike Fisher proposed in 2009. Slightly darker in hue than typical canary diamonds, this is an  incredibly beautiful round stone set with a halo of white diamonds. Some say her stylist suggested a yellow diamond to compliment her beautiful golden locks. 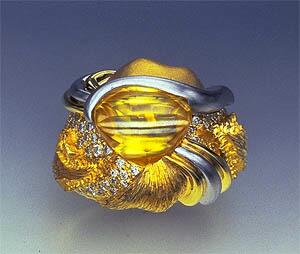 It’s hard to forget the incredible  yellow diamond Hillary Rodham  Clinton wore to  the inaugurations of  her husband–both when he was  elected as governor and  President of  the United States. Famously known as  the Kahn Canary, it was found  in  Arkansas in 1977 and lent to Mrs.  Clinton by Kahn Jewelers for special occasions. 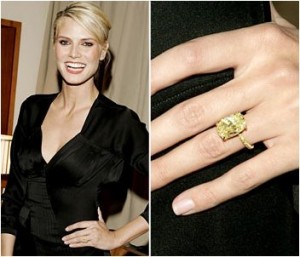 Seal gave Heidi Klum an incredible 10  carat yellow diamond when they were  first  engaged. Klum has often  mentioned the yellow diamond being  a good luck charm  for their happy and  long-lasting marriage. 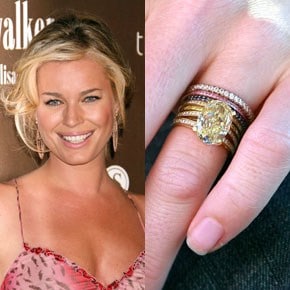 Marilyn Monroe – The Most Famous Wearer of Yellow Diamonds

The incredible 24-carat yellow diamond (below), famously known as the Moon of Baroda, was worn by Monroe at the Hollywood premier of Gentlemen Prefer Blondes. The diamond belonged to the royal dynasty Gaekwad Maharajas and Empress Maria Theresa of Austria. Reportedly to be cursed, the diamond was said to have been the source of Monroe’s misfortune and ultimately, her death. 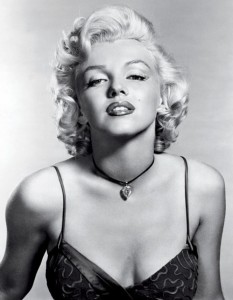 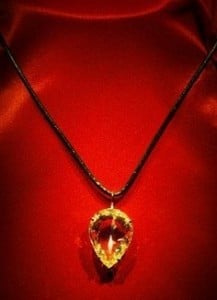 Yellow diamonds have been synonymous with celebrities for decades. Some of the most rich and famous have opted for yellow diamond engagement rings to showcase their wealth, individuality and garner the attention of the media. For one interested in yellow diamonds, there are many options available–some even more affordable than standard colorless diamonds. Either way, this bold and beautiful stone is a delightful choice for an engagement ring for the celebrity in all of us.