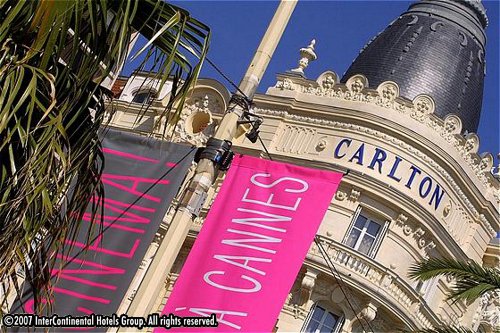 Earlier this week one of the most bold and expensive jewlery robberies in years happened at the Cannes Intercontinental Hotel. The robber appeared as a one-man operation and brazenly walked through the front lobby with a handgun and into an area where a jewels were being displayed. Within minutes, $136 million of precious jewels were stolen–despite the private security guards monitoring the The most surprising thing about this heist?  The security guards were unarmed and the thief was not pursued!

This wasn’t the first jewlery heist gone wrong at the famous Cannes Intercontinental  Hotel. In the 1940’s there was a robbery of approximately $38 million worth of diamonds and other precious gems during an annual jewelers and gemologist show. After that unfortunate incident, the hotel decided to put a ban on all types of jewelry shows until 2012. Less than a year after the ban was lifted, this robbery occurred netting triple the amount in loot.

Ironically, this beautiful hotel also staged the scene for the Alfred Hitchcock’s movie “To Catch a Thief” starring Grace Kelly and Cary Grant. Was it by chance or design that a diamond heist movie was filmed on location of several other real-life robberies? Experts say not necessarily, but there are certain people who are indicating this hotel is jinxed and high rollers carrying precious cargo should consider other options.

Was it Too Easy to Steal Jewlery?

How was it so easy for the lone gunman to take off with an Israeli billionaire’s jewels? The answer lies partly in the fact that France does not allow private security guards (let alone citizens) to carry weapons. The laws are significantly different than in the United States and guns are primarily for police officers. This signals an open door policy for would-be thieves, unfortunately. However, people can get special authorization to enable their security guards to carry weapons and one wonders why the owner chose not to do so.  Sources say that had the police known about the high stakes jewelry exhibit at the hotel, they would have had stationed at least one police patrol and vehicle outside the door.  The organizers of the show and exhibit did not notify the police of the precious gems on display for nearly a month–providing the perfect opportunity for thieves to scout out the area.

Was This Jewlery Heist an Inside Job?

The other question that arises is this: Was it an inside job? One would certainly come to that conclusion considering the ease and speed in which this daring robbery occurred. Statistically, robberies of this magnitude are inside jobs and no doubt the authorities and the insurance company overseeing the stolen jewels will be asking the same questions.

Until more information comes out, the questions will continue, as will the interest in the diamond heist movie “To Catch a Thief“. In the meantime, we invite you to take a look at this fantastic Hitchcock thriller: