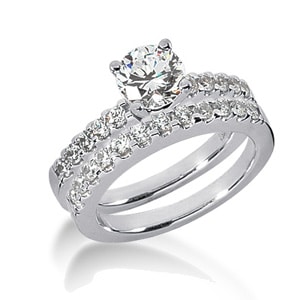 Since not everyone can afford the jewels and gemstones they want, do they have other options? One of the hottest alternatives on the market are diamond simulants. Yet many people ask: How close do they look compared to a real diamond?  How affordable are they? Can they be found in high quality settings?

What is a Diamond Simulant?

Diamond simulants could probably fool you and your friends.  It takes a practiced eye to notice the difference between the genuine and the fake when placed in a very nice setting.  Despite their similar appearance, diamond simulants are made of a completely different material (the exact make-up of which varies from stone to stone).  They are created by scientists in a laboratory, with the aim to be just as beautiful and as close to the real gem as possible.

There are several different types of diamond simulants:

One of the most popular types of diamond simulants is Cubic Zirconia (often referred to as CZ).  This stone is composed of zirconium oxide and very inexpensive, making it ravish the budgeted jewelry market.  Cubic zirconia typically is colorless, but cannot always get the same depth a diamond possesses.  From afar or on their own, they are stunning and not noticeable for what they truly are unless viewed by someone who knows better. There are varying degrees of cubic zirconia on the market. The most popular companies selling high-grade zirconia are: Swarovski,  Russian Brilliants, Diamond Nexus Labs, Emitations, and Carat.

One of the more expensive, but also among dazzling, is the Asha diamond simulant. This stone is loosely considered as a “diamond hybrid” which consists of cubic zirconia with a ‘Amorphous Diamond Treatment’ (ADT) on the surface to give additional luster and protection.  It is touted to be the best diamond simulants on the market and is sold  by Better Than Diamond, MiaDonna, Diamond Hybrid, and Takara. However, it is significantly more expensive.

Rock crystal quartz, also known as a “Herkimer diamond”  is a natural gemstone and can be found in both natural and created versions in jewelry stores.  Coming in ever color of the rainbow, the clear or “white” version is the only one reminiscent of a diamond.  Generally it has fantastic transparency, but its only giveaway is the distinct lack of dancing colors that diamonds possess.  Quartz is often not cut the same way diamonds are but a new generation of skilled cutters is emerging to change the face of quartz. It’s certainly something to keep an eye on these days. Stores which carry rock crystal quartz  include Gemvara and Ross Simmons.

Loosely considered a diamond simulant, moissanite is actually a unique stone with its own properties. It is more expensive than most of the other diamond simulants but is a dazzling alternative to a diamond. Moissanite is actually a precious stone, discovered by Dr. Moissan in 1893. It was so difficult to extract and find in large quantities that most sold in stores are lab-created. It has the shimmer of a diamond but sometimes with a slight yellow or greenish tint. Some feel this makes it more realistic, others feel it sparkles a bit too much. Either way, it’s best to view it in the store before purchasing to give you an idea of its color.  The most popular companies selling moissanite include: Moissanite Diamond, Moissanite Fine Jewelry, Moissanite Co. and Moissanite Enagement Rings.

Can a Diamond Simulant Fool Most People?

We are constantly aware of a few jewelry stores who have been conned by a very nicely cut cubic zirconia or Asha simulant. However, it’s quite easy for them to tell the difference once under a loupe. The good news for the average customer is that most people will never know you don’t have a natural diamond if you have it in a really nice 14k gold, platinum or palladium setting. The verdict? If you can’t afford a natural diamond just now, opt for a high-grade diamond simulant in a fantastic setting and upgrade later.

1 thought on “The Diamond Simulant: Rocking the Look of a Real Diamond”