If you have a wedding anniversary coming up in the next few months, fantastic gift options almost always include diamond anniversary rings. In fact, these one of the most popular types of gifts that women love to receive. Not only are rings beautiful and timeless, they can be incredibly sentimental and symbolic in nature. There are countless types, styles, patterns, arrangements and colors to suit every price range and taste. Because it can be such a wide open topic, we’ve gathered some of the best info to help you narrow down your options. Keep reading to find out how you can pick out the idyllic anniversary ring for your wife.

There are a few considerations to make before buying a diamond anniversary ring. First, think about her existing rings and how she wears them. Take some time to notice what rings she wears and on what fingers, as well as how often she wears rings. It’s important to know that there aren’t any “right” or “wrong” answers. Next, think about her lifestyle and what she does most often during the day. If she is a mother who works in the home, she may be using her hands a lot. On the other hand, if she is retired and not actively pursuing daily hands-on activities, this might affect the type of ring you would by. It’s simply a matter of lifestyle and preference. The other thing to consider is the type and color of metal that she would be most interested in. For instance, if all her rings are in yellow gold, you may want to think about how a platinum band would look and if this would suit her color preference.

A diamond band is a fantastic choice for celebrating your wedding anniversary. Some popular options  include a pave-set diamond anniversary ring and an eternity ring, which many people believe symbolizes the unending nature of love. No matter which style you choose, and there are plenty to pick from, a diamond band is special and meaningful. The durability and style depend on the specific ring you choose, but many options can be ideal for women who use their hands a lot. You’ll also find beautiful rings at any price point, so there’s sure to be one that fits your budget.

By far the most popular option, three stone rings are incredibly symbolic in that they represent the past, present and future of a relationship. They can either be just three stones, or three stones with tiny side stones on either side of the band. 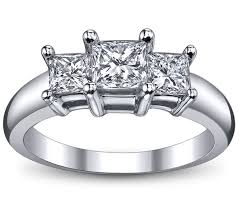 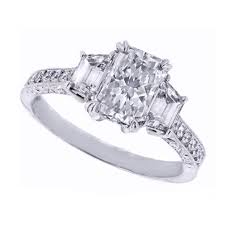 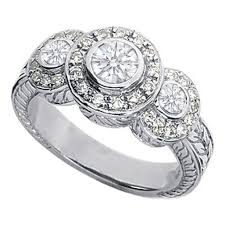 Another popular option is the eternity diamond band, which is essentially a continuous row of diamonds all around the band. This is an absolutely stunning style and one that nearly all women want. The only catch? You will need to know her exact ring size as eternity bands are unable to be sized after being created.

Much like the eternity band, the half-eternity diamond anniversary ring has diamonds that go half way around the band, giving the illusion of an eternity band without the extra expense of double the diamonds, as well as the ability to have the ring sized in the future. 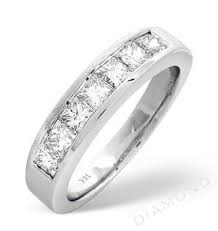 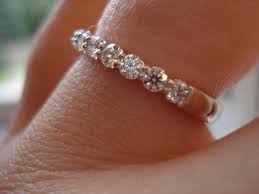 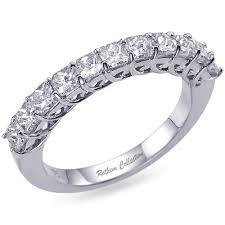