An engagement ring is considered one of the many symbols of the union of two hearts. For almost all couples, an engagement ring not only epitomizes the relationship but the faith, sincerity and culture as well. There are a number of richly symbolic pieces of jewelry that are made available in the market today. One of which is the Jewish engagement ring. Keep reading to find out more about these unique engagement rings.

Engagement rings and other figurative presents have long been known since ancient times most especially during the Renaissance period. It was during this period that Jewish rings and other jewelries have gained much of their significance and value. During Renaissance period, Jewish rings not only served as token to the relationship but also symbolized the commitment and vows the couple exchanged. Jewish rings during this period where shaped like a temple or synagogue with highly intricate details. They are normally around four inches in height may have hidden compartments or working doors which symbolize the family’s wealth.

Except for heirloom pieces, intricate ceremonial rings which were of great value and significance during early times are no longer popular in the modern generation. Most of the brides-to-be of today’s generation prefer to choose popular and stylish designs like bridal sets, solitaires and three stone rings. However, couples who wish to honor and embrace their Jewish heritage may choose among an array of culturally significant rings. Among the most popular culturally significant rings are the following:

How to Find Jewish Engagement Rings

In finding the right ring to perfectly reflect cultural heritage, it is essential to look for a ring that would best suit the couple’s religious beliefs and spiritual background. This can be regardless of whether the ring is traditionally designed or made with modern style. You may be able to acquire Jewish engagement rings from custom jewelers who create rings with unique designs or from specialty designers who offer a wide range of culturally significant rings. You may also choose to check on the internet and look for an online auction for heirloom and antique items.

Here are some examples of Jewish rings: 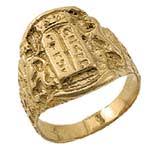