Ownership of the Kohinoor diamond comes at a cost. A curse accompanies the stone. From the moment it’s released from the hard, dull rock to the last polish that would render it worthy of the crown of the most powerful ruler of colonial times: the queen of an island.

“He who owns this diamond will own the world, but will also know all
its misfortunes. Only God, or a woman, can wear it with impunity.”

The Curse of the Kohinoor Diamond 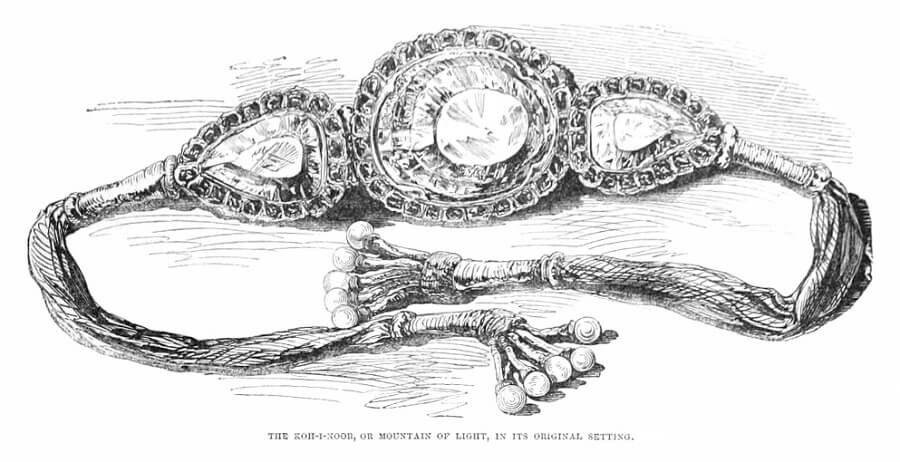 It fell to a woman to wear the Kohinoor Diamond and not suffer the stone’s violent curse. The Hindu text above dates back to the diamond’s first sighting in 1306. It gives fair warning to future possible wearers.

This is no empty threat as even the British Royal family has taken the consequences seriously.

Ever since the reign of Queen Victoria – in the hands of which the Kohinoor first shined, it had become the custom for the diamond to be passed down to the wife of the male heir to the British throne.

Nowadays, the Koh-i-Noor diamond is the most famous diamond in the royal collection of jewels. It proudly adorns the crown worn by Queen Elizabeth the Queen Mother.

Upon her death, the Dutchess of Cambridge, the Queen Consort of the heir prince will inherit the crown along with the outstanding 105.6 carat diamond.

The diamond hasn’t always known such smooth transition of property from one ruler to another. The past lives of the men who owned the diamond are now stories of murder, cruelty, wars, misfortune, and treachery.

Origin of the Kohinoor Diamond

History places the origin of the stone in the Golconda region in Andhra Pradesh. Here lies one of the world’s most famous diamond extraction place. It is believed the Kohinoor diamond was brought to the surface from the Rayalaseema mine, under the rule of the Kakatiya dynasty.

Before its first cutting, the diamond weighed an incredible 793 carats – the biggest diamond in the world. It wasn’t long until the invading Khiljis, following their leader Alauddin Khilji, raided Southern India and snatched the diamond as spoil of war in 1310.

The Koh-i-Noor kept switching ownership, although not by peaceful means at all. Babur, founder and leader of the Mogul Empire, first recorded its existence in the annals of history when he defeated Ibrahim Lodi in 1526 and came into possession of the ‘stone of kings’.

Babur included stories about the diamond in his memoirs, ‘Baburnama’, and it is thanks to this fearsome Indian ruler and his penchant for self-glorification we’re able to trace back the Kohinoor to its origins.

After Babur, the Kohinoor is said to have adorned the Peacock throne of Shah Jahan. Unfortunately, the king’s jeweler, Borgio, did a poor job in cutting it. He reduced its size to 186 carats, a lack of craftsmanship he was severely punished for. 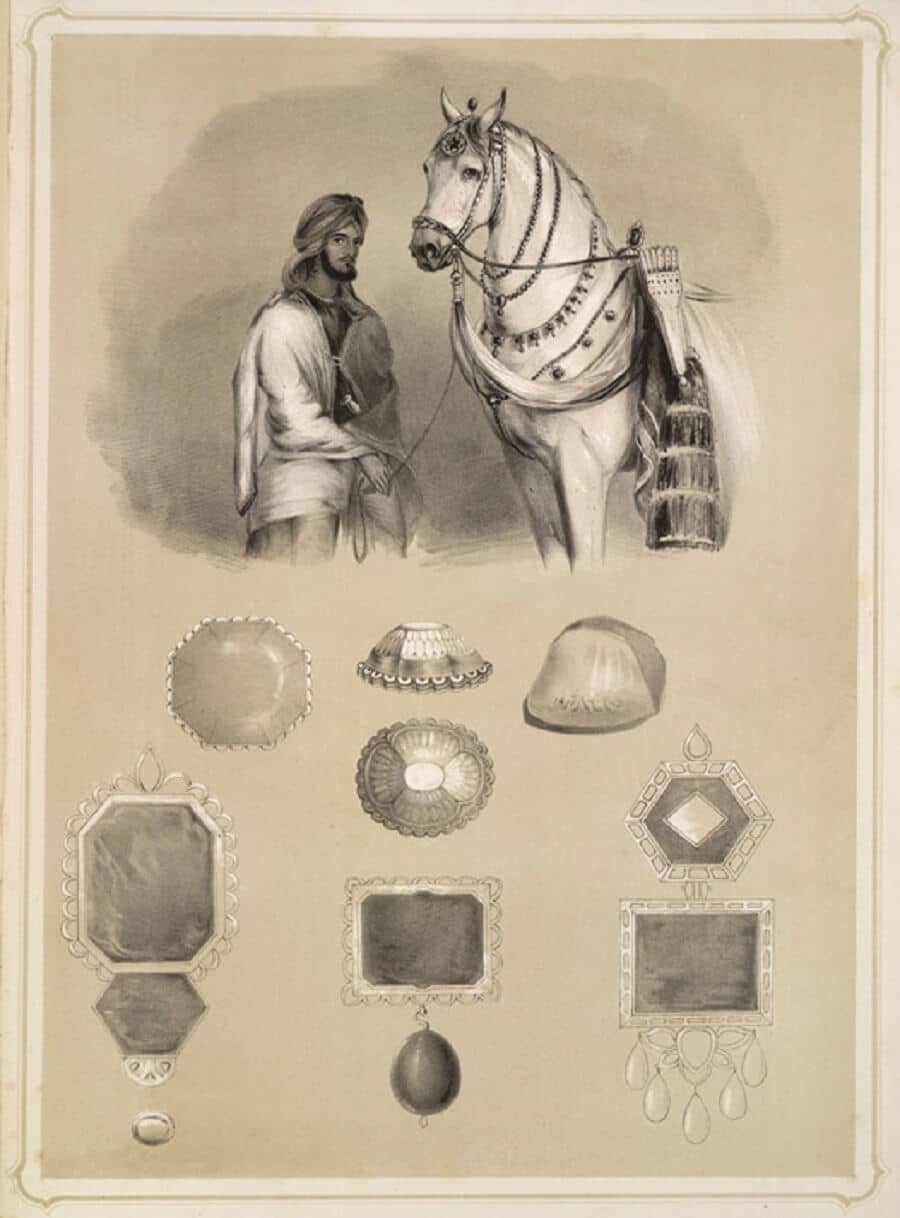 The diamond carried its journey through the hands of numerous rulers who scrambled for both power and power symbols like reputable precious stones.

Ahmed Shah, King of Afghanistan, claimed it as a symbol of his authority. Nadir Shah gave the diamond its current name, ‘koh-i-noor’, which translates from Persian to ‘mountain of light’.

The monarch invaded the Mughal empire in 1739. He did not live long to wear the jewel to his pleasure. Eight years later, he was assassinated. The empire he built turned to dust with his death.

From the hands of Afghani rulers, the diamond transitioned to the crowns of Punjabi Maharajas. Its journey of blood and violence is now almost ending as the British ships are cutting the ocean waves to reach the Great Indies.

The Cutting of a Monarch’s Stone

In 1849, following the Anglo-Sikh wars, the colonial empire conquers Punjab. The Treaty of Lahore proclaims:

‘The gem called Kohinoor which was taken from Shah Shuja-ul-Malik by Maharaja Ranjit Singh shall be surrendered by the Maharajah of Lahore to the Queen of England.’

At the time, the queen of England was none other than Queen Victoria. In 1851, her representative in India, Lord Dalhousie, arranged a show of submission. Duleep Singh, successor of the great Punjab Maharajah, was to present the Kohinoor to the British ruler in a grand event in Hyde Park, London.

After centuries of chaotic ownership, the diamond finally settled, glass-encased, at the Great Exhibition in 1851. But somehow, the British public was not impressed with the cursed stone.

Apparently, the rose-cut diamond did not have enough sparkle. Due to the many complaints, the authorities moved the stone somewhere where it could ‘catch better sunlight’.

Prince Albert knew he had to take other measures to ensure the Kohinoor achieved the brilliance worthy of a spoil of war. After consulting various specialists and mineralogists, the husband of Queen Victoria garnered the support of the government to polish the diamond.

Mozes Coster, who owned one of the most famous Dutch polishing factories – still operating today in Amsterdam, took to the task. The cutting took 38 days, and the operation saw the Kohinoor becoming ever lighter – from 186 carats to 105,6 carats, while simultaneously ever brighter.

The royal jewelers then mounted the Kohinoor in a brooch to be worn by the monarch. Queen Victoria, it’s said, exhibited some qualms of conscience. In a letter to her eldest daughter, she writes:

“No one feels more strongly than I do about India or how much I opposed our taking those countries and I think no more will be taken, for it is very wrong and no advantage to us. You know also how I dislike wearing the Koh-i-Noor”.

Spoil of War or Gift of Gratitude? 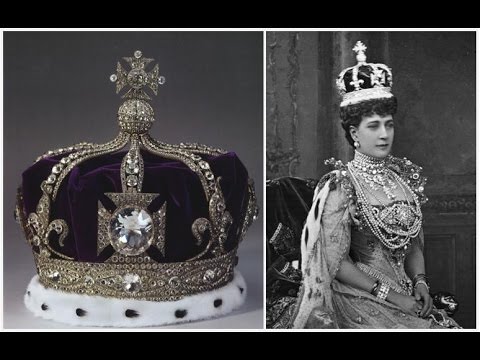 Since then, the Kohinoor has never seen Indian land again. This fact, of course, had been a bone of contention between the Indian and British governments for many years.

Today, the Kohinoor sits on display in the Tower of London as part of the Crown Jewels. Of late, voices in India and Pakistan have been vocal about the return of the diamond to its origin. But where is this, exactly?

This year, the NGO ‘All India Human Rights and Social Justice Front’ has filed a PIL to the Supreme Court to secure retrieval of the Kohinoor, together with other treasures.

But the Indian government took the opposite bench. Solicitor General Ranjit Kumar surprised many when he told the courts the precious jewel had been offered as a gift to East India Company by the successors of the Maharajah of Punjab. He called the diamond ‘compensation’ for the help the Maharajas had received in the Sikh wars.

It’s hard to put a price on the Kohinoor diamond. Actually, there’s no record of anyone ever transitioning the Kohinoor for a price. The diamond had been stolen, bartered, taken by force, and gifted. But never sold.