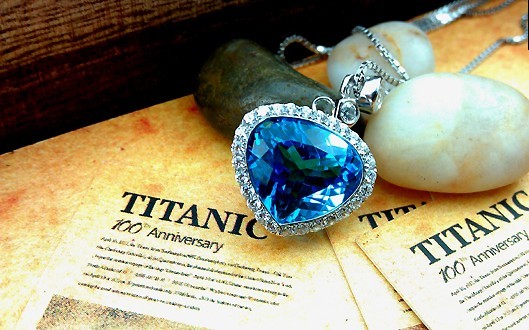 Heart of the Ocean Necklace and the film Titanic

The Necklace and the Inspiration

The combination of the famous Hope Diamond and the blue diamond in the 1943 version of Titanic inspired the Heart of the Ocean Necklace in Cameron’s Titanic. As the story goes, both jewels were once owned by France’s King Louis XVI. It is said that Louis wore the Hope Diamond as a necklace and wore the blue diamond in his crown. The story goes on to say that upon Louis’s execution the diamond was lost and later recovered, cut into a heart shape that was known as the Heart of the Ocean.

In both the 1943 film and the 1997 film, the blue heart-shaped diamond plays an important part in the plot of both films. In the 1943 version, the diamond came to symbolize loss, love and life within the Titanic tragedy.

The Necklace as Special Costume Jewelry

The necklace created for the 1996 film hung on an 18″ diamond chain. The gem was a 1 ¾ inch long semi-precious sapphire set in white gold. This is by far an extremely high quality piece of costume jewelry.

After the release of the movie, the jewelers Asprey & Garrard created a real diamond version of that necklace. It was a 170-carat heart-shaped Sri Lanka sapphire surrounded by 103 white diamonds, totaling 30-carats. The sapphire hung on an 18″ diamond studded chain.

There are a few fine replicas that cost thousands and thousands of dollars. Probably the most famous was created for Gloria Stuart who played the elderly Rose DeWitt Bukater Calvert. Jeweler Harry Winston created a 15-carat blue diamond replica of the Heart of the Ocean that Ms Stuart wore at the Academy Awards ceremony and is valued at $20 million dollars.

There are various fashion jewelry pieces made from Swarovski Austrian crystal, ranging from $20 to $80. Also, 20th Century Fox released an official movie replica created by J. Peterman that very closely matches the necklace from the film. The design is a heart-shaped blue crystal surrounded by white crystals on an 18″ chain with 84 cubic zirconia stones set in rhodium mountings. Peterman’s replicas originally sold for $198 when first released to the public. They are now hard to find and therefore these surviving pieces go for $200 to $300. Should you come across one of these pieces, there should be a certificate of authenticity from 20th Century Fox.

Where to Find the Titanic Heart of the Ocean Necklace

With a little research you can find these replicas online or in many collectible stores. These replicas will run from $25 to $5,000, depending on the workmanship and the materials used to create them.

These beautiful necklaces will be loved by both fans of the film as well as forever romantics around the world. They make wonderful gifts for just about an occasion from birthdays to Valentine’s day.

6 thoughts on “The Mysterious Heart of the Ocean Necklace”