A diamond with a pear cut is made with a rounded bottom and a pointed top. This cut gives the pear cut its alternate name of teardrop cut. It is a popular cut that has the effect of making the finger look slim and elegant. A pear cut diamond is always worn with the narrow end pointing toward the hand when it’s in a necklace or earrings and away from the hand if it’s worn in a ring. Pear cut diamonds are cut to a specific length-to-width ratio. They are most often 1.4, 1.5, 1.6, 1.75 or 2.0. 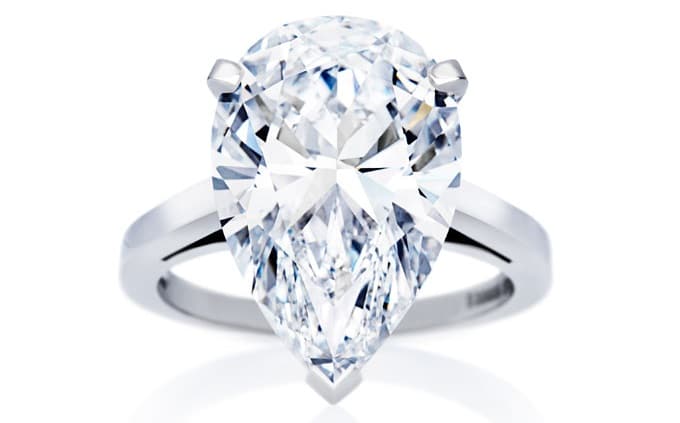 History of the Pear Shaped Diamond

The first pear shaped diamond was cut by the 15th century Belgian jeweler Lodewyk van Bercken, the inventor of the scaif. This is a wheel encrusted with diamond dust and lubricated with olive oil. It is still used to polish diamonds in ways that make the facets symmetrical and bring out the stone’s fire and reflected light.

Properties of the Pear Cut Diamond

The pear cut diamond is a hybrid of the marquise cut and the round brilliant. It has either 58 or 71 triangle-shaped facets and lacks any edges, a table or a culet. The stone should be cut so that the point at the top of the gem aligns with the top point of the rounded end. The shoulders and the curves on the right and left sides of the gem should be symmetrical. Ultimately, the pear cut gem should be all curves and not have any straight edges. The round part of the diamond should be a half-circle and not be too wide or too narrow. To increase the carat weight, some lapidists cut a diamond wider than it should be. This makes it look a bit lumpen.

Many pear-shaped or other oval cut diamonds have a bow tie effect. This is an area of darkness across the center of the diamond and resembles a bow tie. It is not a flaw but occurs because the facets in the jewels do not align properly. This causes light to leak out instead of being reflected. It is difficult to avoid a bow tie effect when creating an oval cut, but the problem has different levels of severity. In some diamonds it’s almost invisible, while in others it is very severe, can be seen from every angle and distracts from the beauty of the stone. Some jewelers believe that a mild bow tie effect contrasts with the sparkle and fire of the diamond, but one should not purchase a diamond with a distracting bow tie effect.

It is up to the wearer to choose the length-to-width ratio of a pear cut diamond, though some ratios are better suited for certain types of jewelry. For example, a narrower diamond, perhaps one with a 2.0 length-to-width ratio. is good for drop earrings while a wider diamond is best for an engagement ring. A pear cut diamond should always have a prong cover the point to protect it from chipping and to hide any inclusions.

Though colorless diamonds of any cut are considered to be the highest quality, many people prefer their pear cut diamonds to have just a touch of color in them.

According to jewelers, completely colorless diamonds should not fluoresce, or give off a bluish glow when seen under ultraviolet light. Stores often sell an otherwise colorless diamond that fluoresces at a discount even though it doesn’t really affect the look of the diamond. A diamond with a lot of yellow color in it and a strong fluorescence looks whiter than it really is. 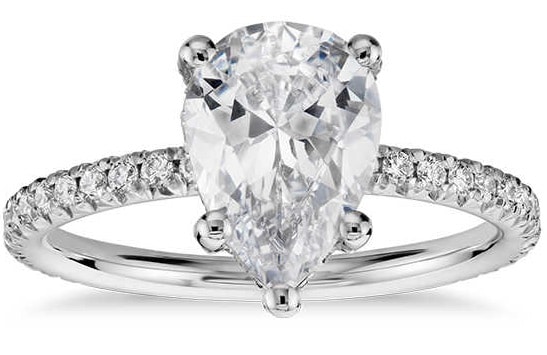 Metaphysical Details About the Pear-Cut Diamond

The word for diamond comes from the Sanskrit word for “luminous being.” A symbol of light, love and abundance, it symbolizes treasures and riches in their guises as moral and intellectual brilliance. A diamond conducts and amplifies all kinds of energy, so the wearer should have positive thoughts when wearing one.

Diamond gives the wearer courage and alleviates fear and emotional and mental pain. It is a universal healer that some seek for its ability to join the mind and the body. It enhances the powers of other stones and eases mental troubles and brain disorders such as epilepsy and stroke. While it opens all of the chakras, it is especially important for the crown chakra. This chakra is found at the top of the head and helps a person access the energies of the universe.

There are many famous pear diamonds. Among them is the Taylor-Burton diamond. This is a jewel bought by actor Richard Burton for his wife, actress Elizabeth Taylor, in 1969. It is a 69 carat diamond that was originally part of a ring with a platinum band. However, Elizabeth famously wore it as part of a necklace.

The Great Star of Africa, now set in the scepter wielded by the Queen of England, is one of several diamonds cut from the Cullinan Diamond, a 3,106.75 carat diamond found in South Africa in 1905. The Lesser Star of Africa is also pear cut and was worn in the coronation crown of Queen Mary in 1911 and is now worn in a brooch by Queen Elizabeth II. The much smaller Cullinan IX weighs 4.39 carats and is part of a ring.

Other pear cut diamonds are the 203.04 carat Millennium Star, a colorless and flawless diamond owned by De Beers; the Star of South Africa, the Graff Pink Supreme, the Rob Red, the Cora Sun Drop and the Great Chrysanthemum.

Where Do We Find Diamonds Today?

The public can see the Great Star of Africa and other crown jewels in the Tower of London. We can also see the DeYoung Pink Diamond, a purplish-pink stone that weighs 2.86 carats but is famous for the intensity of its color, at the National Gem Collection at the Smithsonian in Washington, D.C. Diamonds are found in southern Africa, Brazil, India, Russia and the United States.

Many of the world’s largest and most famous diamonds feature a pear shape. It is a very popular choice for the humbler diamonds that we commonly find on engagement rings. One can find excellent pear cut diamonds in higher end jewelry stores. What do you think about this diamond cut? How would you wear it?