Diamonds are among the most beautiful and valued jewels in the entire world, and a red diamond is considered a treasure among diamonds. Red diamonds are the rarest of all the colored diamonds and they are symbol of status, wealth, and beauty.

You may know that red diamonds are rare, but how do they get their color? How is a red diamond formed? Keep reading to find all the information you need to know about red diamonds, including their value and true rarity. 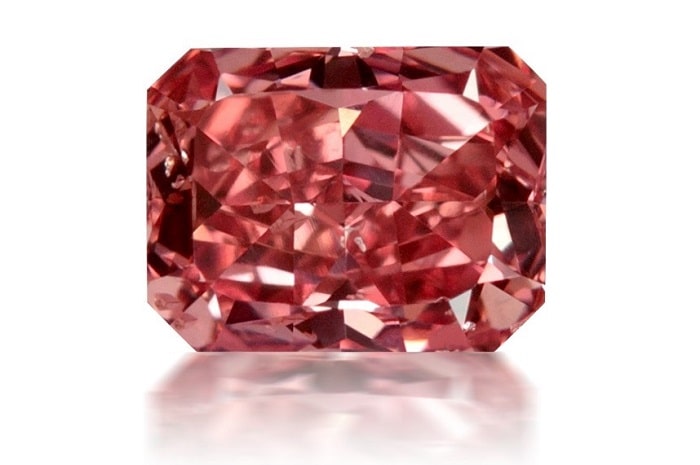 One of the reasons a diamond is sought-after and considered so rare is the way it is created. Graphite is an element found in the Earth’s mantle; the layer that separates our surface from the planet’s molten core. The mantle is 100s of miles below our surface, where pressure pushes at around 725,000 pounds-per-inch and temperatures rise above 2,000 degrees.

The mantle’s extreme environment is the ideal place for elemental changes. Graphite begins to change under the heat and pressure, undergoing molecular and atomic changes. The graphite’s properties continue to change and reform itself into prismatic, triangular shapes. Those triangular shapes are what you recognize as a raw diamond.

A diamond is exceptionally rare and fascinating because it is created 100s of miles below us. It can only travel to the surface via volcanic pipes that are located in areas all over the world. Diamonds use these pipes to travel up to the surface, where they are mined and cut into beautiful jewels.

Where Does a Red Diamond Get Its Color From?

As you read above, diamonds are the result of graphite morphing into crystalline structures. When nothing obstructs this formation (which is usually the case), it forms into a white, or clear diamond. Though it is rarer, sometimes elemental and environmental changes during the process can change the outcome, or color of the diamond.

Some diamonds are created differently, however. Green diamonds are a result of the diamond’s interaction with radiation and other elements within the soil. Brown, pink, and red diamonds are even more mysterious. A red diamond, along with pink and brown, is the result of super-intense heat and pressure during its creation. This abnormal environment causes the crystalline structures to distort and absorb specific bands of light, creating the pink, brown, or red color.

How Rare Is a Red Diamond? 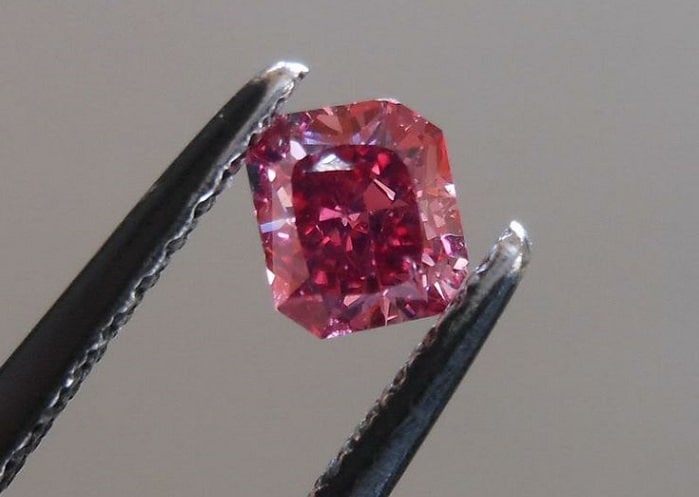 The largest percentage of diamonds found are white or clear diamonds. This means that their formation was undisturbed and the diamond is pure. It is much rarer to find diamonds that are colored, or “impure.” Among all the colored-diamonds found in nature, brown diamonds are the most common. Pink, yellow, and green diamonds are pretty rare, but none are as rare as the red diamond.

A red diamond is the rarest diamond in the world, because it is near-impossible for a diamond to have the perfect conditions during its formation.

Where Are Red Diamonds Found?

Diamonds can form and show up anywhere, but they have been sourced mostly from North/South Asia, Africa, South America, and Australia. Most red diamonds have been found in places where pink diamonds have also been frequent. Today, most red diamonds come from the Argyle mine in Australia; responsible for more than 80 percent of the world’s diamonds.

To paint a better picture of its rarity, only 100 red diamonds have ever been officially certified.

Though there is only one pure, red color, red diamonds can have secondary hues like orange, brown, or purple. Red diamond hues can range from strawberry to crimson, and its strength of color is what gives the red diamond its true value. Both the intensity of color and clarity is the largest determination of its grading value, though the price obviously increases with size, cut, or carat.

How Much Do Red Diamonds Cost?

It should be fairly obvious that the red diamond is considered the most-expensive diamond in the world. This is mostly due to simple supply-and-demand economics, considering the red diamond is the also the rarest. Because of this, most natural, red diamonds are owned by the very wealthy and investors. Its rarity and status means that its value is always on the rise and it’s an ideal investment option.

Though price is always dependent on a variety of factors, like color, cut, clarity, and carat, a red diamond rarely sells for under $100,000 per 0.2-carats. This makes it the most-expensive type of diamond in the world.

The first recorded red diamond was found in 1956 by a Montana rancher who later sold it for a 6,500-percent profit. The Rob Red is the purest red diamond in the world, weighing in at .59-carats. It is described as the most-saturated red diamond. The Moussaieff Red Diamond is the largest red diamond ever recorded. The triangular-cut diamond was discovered in the 1990s, weighs 5.11-carats, and recently sold for $8 million.

The Kazanjian Red Diamond is the second-largest, weighing in at 5.05-carats. The Supreme Purple Star red diamond is one of the most mysterious diamonds in the world. Its exact color and clarity cannot be revealed, since it appears to hold two different colors when rotated to different angles.

A red diamond is the rarest, most mysterious diamond in the world. Its beauty is only surpassed by its exceptional rarity. From a hot, powerful, formidable environment comes a gemstone of absolute perfection and quality. The red diamond is a testament to the miracles of our planet. Please remember to always consult a reputable jeweler for all of your red diamond needs.