If you’re wondering what the state stone of Minnesota is, you’ve come to the right place. In 1969, the agate from Lake Superior was designated as the state gemstone. It has a lovely pattern of iron-rich bands of color that runs through it. This stone can be found all over the state and is a favorite of rock hounds everywhere. Even though the gemstone is frequently mistaken for agate, it is composed of silicon dioxide.

The Lake Superior agate, a banded quartz stone, is the official state gemstone of Minnesota. The agate of Lake Superior is a natural gem found on the shores of the Great Lake. This stone has the potential to be polished and used in jewelry. People find it challenging to keep their hands off it because it is so lovely to look at. However, it is also available in various shapes and colors and can be found all over the country, from the lakeshore to the cost. 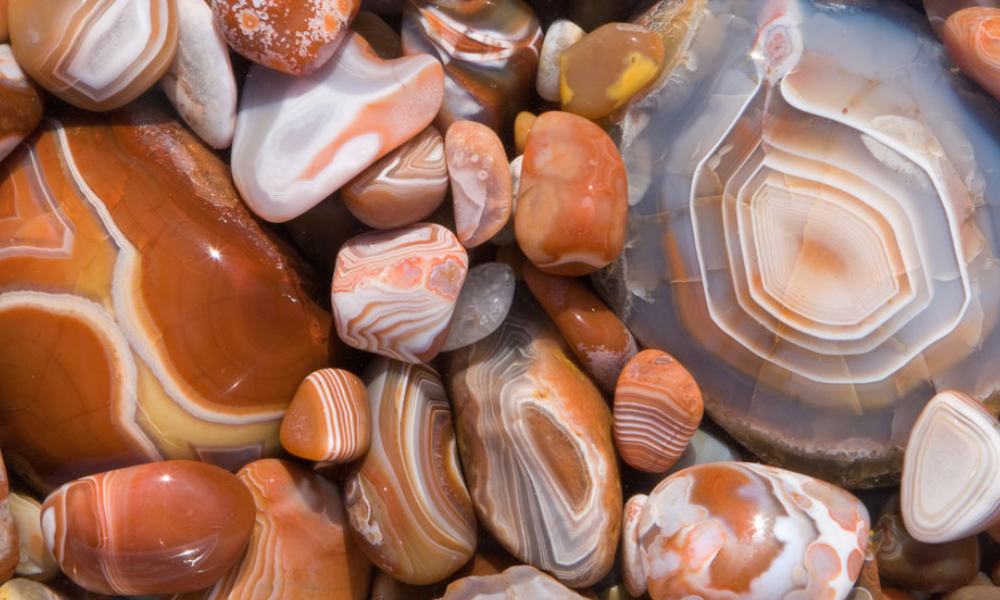 Mrs. Dahlberg, a long-time rock hound and ardent agate fan, testified in front of the state legislative committee considering the bill. She was well aware of the agate from Lake Superior’s suitability as the state gemstone.

Other logical candidates, however, existed. The iron-rich jaspers Binghamite and blazing yellow silkstone, both found in the Cuyuna iron range area, were obvious choices. Another strong contender was Thompsonite, a beautiful and popular zeolite mineral found only in Minnesota on a remote stretch of Lake Superior. Another option was pipestone, carved into peace pipes by Indians in Pipestone.

However, a closer examination of the Lake Superior agate’s history reveals that it was the best option. Many aspects of Minnesota are reflected in the agate. It was formed around a billion years ago during lava eruptions in our state. Iron, our state’s most important industrial mineral, is responsible for the stone’s predominant red color. Finally, the widely distributed agate reveals the impact of glacial movement in Minnesota between 10,000 and 15,000 years ago.

More than a billion years ago, the North American continent split into two. This catastrophic event poured massive iron-rich lava flows from deep within the Earth. These flows are now visible on the Superior north and south shores.

Millions of tiny water vapor and CO2 bubbles were trapped within the solidified flows, called gas pockets or vesicles. Water with ferric iron and other dissolved minerals later passed through the gas vesicles. The quartz-rich groundwater solutions crystallized into chalcedony, fine-grained quartz.

Over the next billion years, water and chemical disintegration of the lavas freed some of these quartz-filled, banded cysts, which were now more complex than the lava rocks that contained them. Most stayed in the lava flows until the next major geologic event changed them and Minnesota.

The world’s climate cooled about 2 million years ago, kicking off the Great Ice Age. The Superior lobe of glacial ice moved into Minnesota 10,000-15,000 years ago. Agate-filled Superior trough The glacier carried surface agates south. Its crushing action and base’s freezing and thawing cycle freed and transported many agates from lava flows. The advancing glacier abraded, fractured, and rough-polished the agates.

The Lake Superior agate’s rich red, orange, and yellow coloring set it apart from other agates. Iron oxidation causes this color scheme, and iron leached from rocks provides the gemstone’s beautiful color range. The amount of iron and oxidation determine the color of an agate’s bands.

It comes in various sizes. The agates formed in gas pockets about the size of a pea. Agates from Lake Superior can weigh up to 20 pounds or a bowling ball. Giant agates like this are extremely rare, but others may exist.

The parallel-banded, onyx-fortified, or water-level agate is a common subtype. These stones have perfectly parallel bands across them. Small puddles of quartz-rich solutions crystallized inside the gas pocket, resulting in the straight bands. The bands’ parallelism also indicates the agate’s position in the lava flow.

The most common Lake Superior agate is also the rarest. Eye agate has perfectly round bands or “eyes” dotting the surface.

Rarely do collectors find a gemstone with a nearly flawless natural surface. These rare agates are said to have tumbled in the waves along a long-gone rocky beach, and they are called “watershed” agates.

Finally, the rarest Lake Superior agate is the one that collectors dream about but only find once in a lifetime. Only one in 10,000 agates fits this description. They weigh 2 pounds or more and are perfect in shape, color, and banding. They are the “all-timers.”

Gemstone implies a stone that can be cut and polished to look like a jewel. Lapidary — the art of cutting and polishing stones — is one of the most popular uses for Lake Superior agate. Tremendous pressures within the ice and repeated freezing and thawing fractured most agates during glacial movement.

Medium-sized “lakers” (between 1/4 and 1 pound) are often diamond sawed into thin slabs, which are then shaped. The polished side of the shaped slab produces fine jewelry and cabochons. Set in rings, bracelets, belt buckles, and ties.

Face polishing is a less common technique on the state gem, and it involves polishing a curved surface on the part of the stone while leaving the rest natural.

One of the most appealing features of the Lake Superior agate as the state gemstone is its abundance. Northern and central Minnesota and extreme northwestern Wisconsin were all affected by the Superior lobe.

Thanks to glaciers, hikers, campers, hunters, and other outdoor enthusiasts can easily collect Minnesota’s official rock. Beautiful specimens have been found in river and stream gravel banks.

The Mississippi River and the North Shore waters of Lake Superior are famous hunting grounds. Many gems have been found on Lake Superior and other lakes’ beaches, and Lake Superior agates can be found almost anywhere with exposed gravel and rocks.

Face polishing is a less common technique on the state gem, and it involves polishing a curved surface on the part of the stone while leaving the rest natural.

Clues to Finding the State Gem

You’ve decided to look for Lake Superior agates, but where to look? No simple answer. The richly colored banding pattern is usually obscured, so prospectors must look for other agate-related clues.

The following traits will aid in field agate identification. 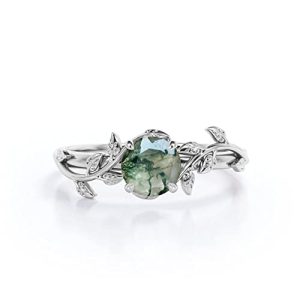 Unique engagement best Selling Natural Moss Agate Engagement Ring For Women, Alternative Engagement Ring, Nature Inspired Leaf Ring, Healing Gemstone Ring A genuine moss agate gemstone cut in a kite/shield shape, caught amongst the bare of this rose gold plated branch ring. The beautifully dramatic look and shape of the gemstone get balanced up by the rose gold, creating a unique and cool yet sleek and elegant piece ▪ Material – Made of 925 Sterling Silver, the ring is proved to be body-safe after rigorous contact test. Without any harmful ingredients, it is nickel-free, lead-free, cadmium-free, and anallergic.

What is the Rock that Minnesota is known for?

It is the Lake Superior agate that has been designated as Minnesota’s state gemstone, so named because it is found primarily along the shores of Lake Superior. Agates formed in basalt cavities as a result of the weathering process. As mineral-rich water circulated through the cavities, silica (SiO2), also known as quartz, was deposited in layers along the cavity walls as it passed through them. The Lake Superior agate is a type of agate that has been stained by iron and can be found on the shores of Lake Superior in northern Minnesota. In Minnesota, Wisconsin, Nebraska, Iowa, Kansas, and Michigan, its widespread distribution and iron-rich color bands reflect the gemstone’s geologic history. As a result of the gemstone’s geologic history in these states.

Is it Possible to Find Amethyst in Minnesota?

All quartz minerals are composed primarily of silicon dioxide, with trace amounts of impurities imparting a wide range of colors to the crystals. The following are the types of quartz commonly found in Minnesota: AMETHYST has been discovered in veins and rock crevices in the vicinity of the Gunflint Trail and collected. Quartz is the most common mineral on the planet. Quartz is composed of the two chemical elements found in the most incredible abundance on Earth: oxygen and silicon. Tetrahedrons are formed when oxygen and silicon atoms come together (three-sided pyramids). Crystals are formed when these are stacked together.

What is the Location of a Minnesota Agate?

Agates can be found in Minnesota’s central and northeastern regions, as well as in northwest Wisconsin. Agates can be found in abundance in gravel pits and along the banks of rivers and streams. To hunt in a gravel pit, you must first obtain permission from the landowner who owns the property, and some property owners will not grant permission because they are concerned about injuries.

Is it Possible to Find Amethyst in Lake Superior?

Various precious metals such as gold, platinum, silver, nickel, and gemstones, including amethyst, agates, and even diamonds, have been discovered. Another geologic camp considers the region to be famous. Many Lake Superior minerals are sought after by collectors because of their beauty, aesthetic qualities, or rarity.

Is There Silver in the State of Minnesota?

Minnesota has a great deal of mineral wealth to offer. Much of Minnesota’s geologic terrane is a continuation of the mineral-rich Canadian Shield of Ontario and Quebec, which has produced gold, silver, zinc, copper, nickel, titanium, and other precious metals and base metals, as well as other metals and minerals.

Is it True that Gold has Ever been Discovered in Minnesota?

Later, during the summer of 1893, gold was discovered on Little American Island, located within Rainy Lake (along the U.S.- Canadian border). Miners looking to strike it rich flocked to the northern region, searching for riches. The Little American Mine was the only productive gold mine to ever operate in Minnesota, and it is no longer in operation.