“Stones have life and color, but diamonds are the most precious of all.” –George Eliot -but gemstones are more than just beautiful -they are also expensive. These rare gems are often carved to perfection and can cost millions of dollars. The term gemstones, sometimes known as gems, refers to both precious and semi-precious stones. They claim that beauty is subjective. When it comes to jewels, the adage holds true. Indeed, if we go through all of them throughout history, the list of precious stones would almost certainly be unending, as humanity’s admiration of jewels dates back to prehistory.

Gems were utilized by our forefathers to treat bodily diseases and ward off evil spirits. Jaundice was claimed to be cured by yellow jewels, spells were thought to be protected by green gems, and bleeding was said to be stopped by red gems. Each gemstone evolved its own set of unique features over time that contributed to the significance of the stone. Gemstones are now known for their metaphysical characteristics, which help us connect our human consciousness to our spiritual selves. Wearing specific jewels can have an impact on several aspects of life, such as love, stress, mental clarity, grounding, and even abundance. 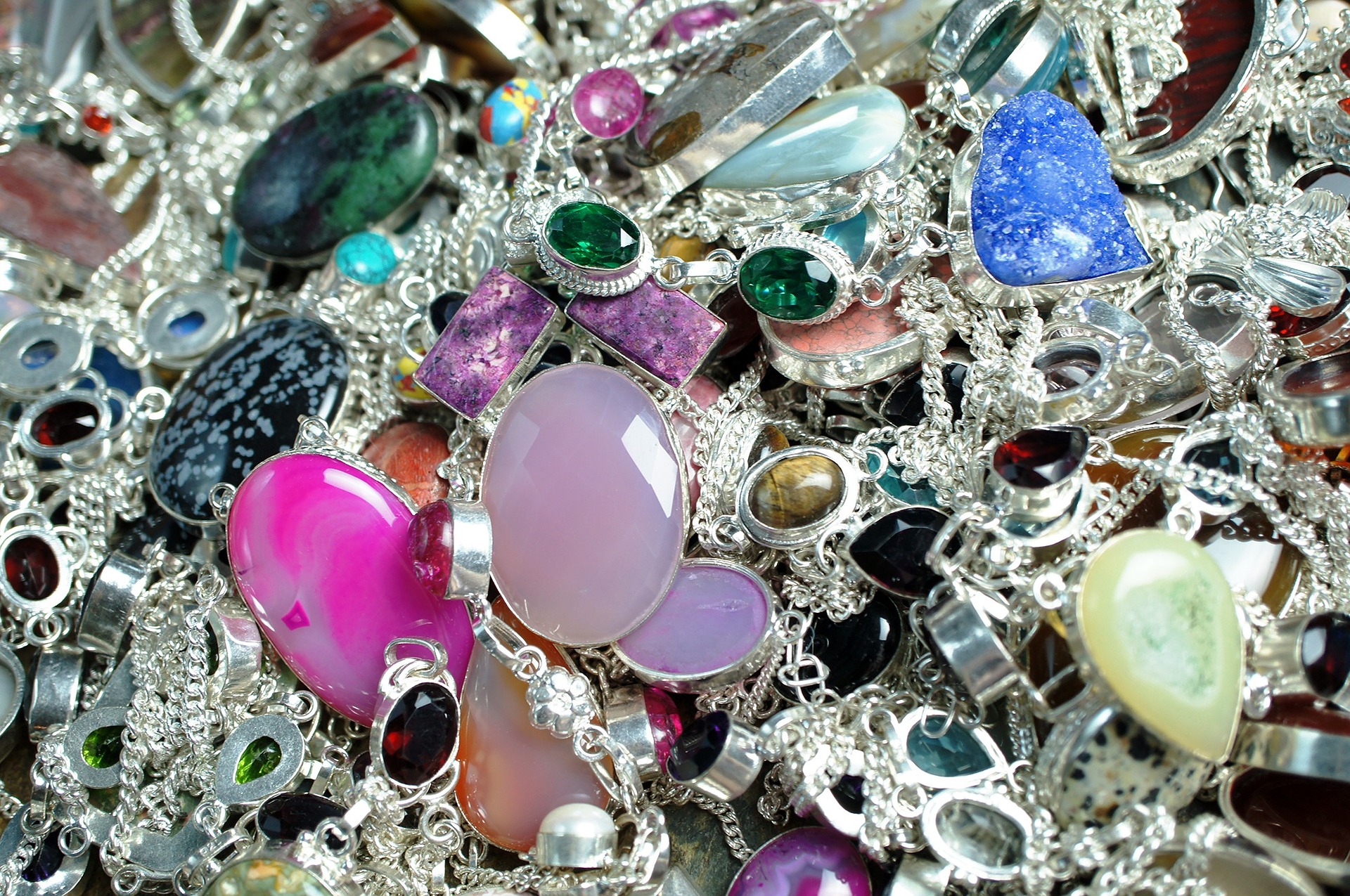 What Are The Most Expensive Gemstones?

Diamonds are the most common precious stone, but they aren’t always the most valued. Not only is diamond the hardest gemstone on the planet (10 on the Mohs scale), but its refractive index is a stunning 2.418, which explains why the precious stone is so bright and brilliant – the gemstone preserves light 2 12 times longer within its translucent crystal. While most people think of diamonds as being white, the valuable stone comes in almost every color of the rainbow. Fancy-colored diamonds, with the exception of yellowish and brown variants, are even more valuable than white diamonds. The most valuable gemstone on the planet is a red diamond. However, this does not imply that all mineral hues are the same. Diamonds’ symbolism of protection may also be linked to the fact that they are exceedingly robust and difficult to cut or shatter, which is why they are such sought-after gemstones!

Rubies are one of the most popular gemstones, and because of this, they can be as colorful or as dull as you wish. Ruby is a red valuable stone from the corundum mineral group, which is second only to diamond in terms of hardness (9 out of 10 on the Mohs scale). The red gemstone, which is more expensive than the white diamond and the world’s second most valuable precious stone after the red diamond, is an incredibly rare gem. The color of ruby is primarily due to chromium intrusion into the normally colorless gemstone. The intensity of this red color is the most important factor in determining the value of a ruby. As a result, precious stones with a brilliant blood-red tint, often known as pigeon’s blood, are the most valuable.

The most valuable gemstone is the blue sapphire. It is renowned for its trichroic pleochroism (three colors can be seen in one stone depending on the angle from which it is viewed), which makes it a valuable gemstone. While the deep blue form of sapphire is the most popular and valuable, the precious stone is found in all colors except red, which would be called ruby. Pink sapphire is the name given to corundum that is even a shade less red than ruby. The orange variant of sapphire known as Padparadscha, as well as black and blue star sapphires, or those that reflect light in a star-like pattern, command a premium price, just like blue sapphire.

This is especially true of emeralds. It’s possible that the explanation is due to the name, or branding. The green variant of the mineral beryl is known as emerald. Any other type of beryl is not referred to as emerald. Aquamarine is light blue beryl, heliodor is yellow beryl, and morganite is pink beryl. Because none of these beryl variants are labeled as emerald, none of them have the same prestige as their green relative and are referred to as precious stones — not even the rarest of beryl, red beryl, which is more expensive than emerald.

Another gemstone for couples is the moonstone crystal, which symbolizes affection and care. Moonstone benefits for women bring forth the divine feminine, allowing for a deeper connection with oneself and more intimacy with a partner. Moonstone therapeutic capabilities are also claimed to improve communication in a relationship and symbolize the fulfillment of one’s destiny, in addition to these qualities. The relaxing qualities of moonstone provide respite from stress and emotional strain. Moonstone’s spiritual connotation is “fresh beginnings,” as the stone promotes growth and inspiration, allowing you to take on new challenges with confidence.

Because of its close link with the Heart Chakra, the rose quartz crystal meaning indicates unconditional love, compassion, and forgiveness. This stone indicates the heart’s opening to all kinds of love, whether it’s friendship, personal love, or self-love. Rose quartz is associated with a gentler, more loving sort of love than diamonds, which symbolizes “Everlasting love.”This love isn’t just romantic; it also includes self-love and platonic affection. Rose quartz advantages can ease an aching heart and can be used for healing from emotional stress such as breakups or lost friendships. Reach for rose quartz if you need to be surrounded by delicate, feminine, and charming energy.

Aquamarine has always been associated with the sea, as its name suggests. One glance at its delicate, light blue tones evokes calm, regenerating energy reminiscent of a peaceful ocean. It represents peace, tranquillity, and renewal. The definition of aquamarine is “water of the sea.”Aquamarine has been connected with great beauty and riches throughout history and was even used to safeguard seafarers on long and risky trips. Aquamarine, like amethyst, is tranquil and soothing to the user. When handed from one partner to another, it is claimed to be wonderful for helping meditation and may even help smooth difficult patches in a relationship.

Citrine is a mineral that belongs to the Quartz family. Citrine is thought to convey to the user the solar attributes of warmth and happiness, as it is golden and gleaming like a drop of sunlight. Citrine boosts vigor, willpower, and personal strength because it resonates with the Solar Plexus Chakra. Citrine is claimed to be one of the few crystals that can’t hold negative energy, and personal experience backs this up. Try charging a piece of Citrine with negative energy and see how long you can maintain a frown. Heat-treated Amethyst makes up a large portion of the Citrine on the market; the two are chemically related and are frequently seen together in a stone called Ametrine.

Serpentine gets its name from its speckled green and black look, which resembles snakeskin. Serpentine, often known as “New Jade,” can be found in a variety of patterns in deposits all over the world. It was employed as a talisman by the ancients to protect them against snakebites and poisons. Serpentine is one of the most psychically active Earth stones, with Magnetite deposits in some specimens (natural magnetic stone). Serpentine promotes the discovery of magical secrets as well as spiritual plane observation. It’s a great way to combine wisdom-seeking and shamanic techniques. Partner with Serpentine for rites of initiation, deep meditation, and working with kundalini energy. Because its powerful energy can be disruptive, Serpentine is often paired with balancing and grounding crystals.

Why Gems Are Valued As Precious?

The most valuable stones are those found in a particular country, but the rarest ones are emeralds. A few countries produce a large amount of tanzanite. A few countries in the world mine the blue-purple stone. But it can cost as much as $10,000 per carat, depending on the quality and cut. Green, blue and purple emeralds are the most expensive. A gem with the color blue is called a sapphire. The stone is the hardest substance on earth and is considered the most expensive. The highest-priced emerald is worth more than $1.5 million. This gem is the most valuable among all the gemstones. However, its rarity makes it a desirable gemstone for jewelry buyers.

Why Sapphire Is A valuable Gem?

Apart from diamonds, the most valuable gemstone is a sapphire. This is a natural gemstone that is considered to be the most valuable. The Pink Star Diamond is a 59.6-carat pink diamond that sold for PS68,000,000 ($83 million US) at auction in 2013. It is also known as the ‘Pink Dream.’ The Gemological Institute of America boasted that it was the world’s largest flawless pink diamond and broke the previous record for a ‘Pink Star’. The ‘Pink Star’ has a high rarity index of ‘blue’.

Which Is The Most Expensive Gem And Why?

The most expensive sapphire is the most valuable one of all. However, the more expensive a blue diamond is, the rarer it is. Its darker color means it is rarer and more valuable. Despite being the most expensive gemstone, it doesn’t necessarily mean it is the most valuable. The jewel of Kashmir is a $6.7 million sapphire. The gemstone was found in the mountains of India. Its color made it a popular stone for ancient people. According to popular belief, it symbolizes passion. A $20 million ruby ring from Switzerland in 2015 had a price tag of $30 million. The “Sunrise Ruby” was the most expensive stone ever sold for $30 million in Geneva. It was 26 carats and was named after the poem by Rumi. The jewel was so rare that it was referred to as the ‘Sunrise Sapphire’.

In ancient times, gemstones have played a vital role in human history. Many people believed that these stones held mystical powers, and their value has not changed. Today, gemstones are not only valuable but they also play an important role in jewelry. In addition to their beauty, rubies also have a unique significance in astrology. Keep in mind, however, that clarity can affect a gem’s durability and jewelry use. Furthermore, cutting can have a significant impact on a gem’s look, therefore inspect cut gems carefully. Always go for the most expensive cut you can afford. Lapidaries do not always produce faultless work, just as nature does not always give ideal stones. Be willing to make concessions. You might not be able to afford the stones of your first choice. Within your budget, find the diamond that best suits your personality. Finally, the most important element to consider when purchasing a gem is the delight you will derive from it.