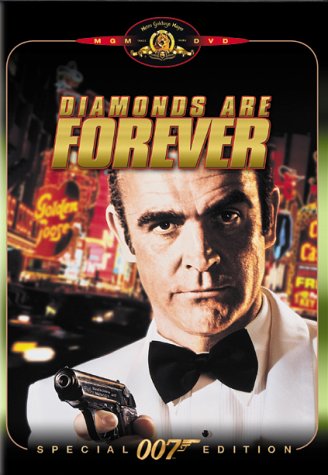 Diamonds Are Forever (1971) is the seventh spy film in the James Bond series and the sixth and final Eon film to star Sean Connery as the fictional MI6 agent, James Bond.

The film is based on Ian Fleming’s 1956 novel of the same name. The story has Bond impersonating a diamond smuggler to infiltrate a smuggling ring, and soon uncovering a plot by his old nemesis Blofeld to use the diamonds and build a giant laser. Bond has to battle his nemesis for one last time, in order to stop the smuggling and stall Blofeld’s plan of destroying Washington DC, and extorting the world with nuclear supremacy.

Diamonds Are Forever – The Plot

James Bond – agent 007 – pursues Blofeld and eventually finds him at a facility, where Blofeld look-alikes are being created through surgery. Bond kills a test subject, and later the ‘real’ Blofeld, by drowning him in a pool of heated mud.

While assassins Mr. Wint and Mr. Kidd systematically kill several diamond smugglers, Bond travels to Amsterdam to meet contact Tiffany Case. The real Franks shows up on the way, but Bond intercepts and kills him and switches IDs to make it seem like Franks is Bond. Case and Bond then go to Los Angeles, smuggling the diamonds inside Franks’ corpse.

At the airport Bond meets his CIA ally Felix Leiter and goes to a funeral home, where Franks’ body is cremated and the diamonds passed onto the next smuggler, Shady Tree. Bond is nearly killed by Wint and Kidd when they put him in a cremation oven, but Tree stops the process when he discovers that the diamonds in Franks’ body were fakes, planted by Bond and the CIA.

Bond tells Leiter to ship the real diamonds as he goes to Las Vegas. There Bond goes to the Whyte House, a casino-hotel owned by the reclusive billionaire Willard Whyte.  Bond discovers Tree has been killed by Wint and Kidd, who did not know that the diamonds were fake. At the craps table, Bond meets the opportunistic Plenty O’ Toole, and after gambling, brings her to his room. Gang members are waiting there and throw O’Toole out the window and into the pool. After they leave, Bond spends the rest of the night with Tiffany Case. Bond then tells Tiffany, who wants to steal the diamonds for herself, to retrieve the diamonds at the Circus Circus casino.

Tiffany picks up the diamonds, but reneges on her deal and flees, passing off the diamonds to the next smuggler. However, seeing that O’Toole was killed after being mistaken for her, Tiffany changes her mind and drives Bond to the airport, where the diamonds are given to Bert Saxby. Following Saxby’s van, Bond eventually enters the car which drives to a remote facility. Bond enters the apparent destination of the diamonds – a research laboratory owned by Whyte, where he finds that a satellite is being built by a laser refraction specialist, Professor Dr. Metz. When Bond’s cover is blown, he escapes by stealing a moon buggy and reunites with Tiffany.

Bond and Tiffany return to the Whyte House. Bond scales the walls to the top floor to confront Whyte. Inside, 007 is instead confronted by two identical Blofelds who use an electronic device to sound like Whyte. Bond kills one of the Blofelds, but it turns out to be a look-alike. He is then knocked out by gas, where he is picked up by Wint and Kidd and taken out to Las Vegas Valley where he is placed in a pipeline and left to die. After Bond escapes, he calls Blofeld posing as Saxby. He finds out Whyte’s location and rescues him, but in the meantime Blofeld abducts Case. With the help of Whyte, Bond raids the lab and uncovers Blofeld’s plot to create a laser satellite using the diamonds, which by now is already in orbit. With the satellite, Blofeld destroys nuclear weapons in China, the Soviet Unionand the United States, then proposes an international auction for global nuclear supremacy.

Whyte identifies an oil rig off the coast of Baja California as Blofeld’s base of operations. After Bond’s attempt to change the cassette containing the satellite control codes fails due to a mistake by Tiffany, Leiter and the CIA begin a helicopter attack on the rig. Blofeld tries to escape on a mini-sub, but Bond gains control of it, crashing it into the control room, causing the satellite control and base to be destroyed. Bond and Tiffany then head for Britain on a cruise ship, where Bond also foils Wint and Kidd’s attempt to kill them with a hidden bomb.