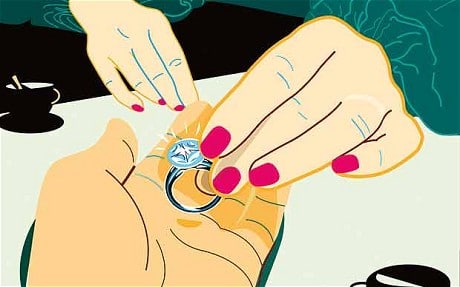 While many engagements lead to marriage, there are some that do not for a variety of reasons. This type of situation requires sensitivity and diplomacy in order to minimize the pain or discomfort. Sometimes, an engagement ring is returned for different reasons.

Why Return a Diamond Engagement Ring?

Generally speaking, a diamond engagement ring is returned if the either or both parties decide that the relationship isn’t going to work out. There are some other situations, however, in which a ring is returned that might include:

No matter what the reason is for returning an engagement ring, it is best done with kindness, care and as much diplomacy as one can muster in order to further hurt feelings or add to the expense.

How to Return a Diamond Engagement Ring

1. Returning the Ring Back to the Person

The “rules” of engagement generally include giving back the ring to the person who purchased it. Engagement rings are considered gifts and it is even law in many places that engagement rings belong to the person who bought it (generally the male in the relationship). Despite it being a sad or unfortunate situation, one of the most classy things is to ensure it is done with grace, kindness and within a reasonable time frame. This helps alleviate problems with the store return, because if a certain period of time has passed the ring may not be able to be returned thus causing more expense.

If returning the ring in person, make sure you are prepared for the emotions and don’t get caught up in old arguments or other similar scenarios. Short and sweet is the easiest thing to do if the engagement is absolutely not going to marriage. If it is too difficult to return the ring in person, return it via tracked and insured mail services like Fed Ex or UPS, signature required, for the most secure method. Include all packaging, certificates, receipt and other information that you received in order to make it as seamless as possible and avoid future problems.

On some occasions, the man may not want the ring back and it would be important to get this stated in writing to avoid future problems (things can have a way of resurfacing!) If he doesn’t want the ring back, politely find a way to ask for the receipt and other certification so that the ring can be sold or traded in.

2. Returning an Engagement Ring to a Store

More often than not, engagement rings are unable to be returned to a store after purchase–and especially if they are custom designed. The jewelers would have had to create a ring just for you and reselling it may prove difficult, if not costly, for the jewelry store. Check out the store’s return policy conditions and time frames, generally on their website or in the fine print of the receipt. Because of the high dollar value, most jewelry stores are not able to return rings unless it is within their usual 15-30 day return policy time. Have all the documentation ready and return the ring at precisely the same store where it was purchased in order to have it go as smoothly as possible. Be prepared for the possibility of no return or being offered an exchange or store credit.

Some men propose to their girlfriends with a ring that has been in the family for a generation or more. These are considered “heirloom rings” and have special sentimental value to the family involved. If a woman is given an heirloom ring and breaks off the engagement, she should carefully and politely return the ring to either the man who gave it to her or one of the family members. Being gracious and polite is key to this situation, albeit a difficult one.

In rare and tragic circumstances, a bride-to-be may loose her fiance due to death. With this being a sad and sensitive time for all parties involved, the discussion of the ring is best left to the girl and his closest relative.

What if a Diamond Engagement Ring is Unable to be Returned?

In some circumstances an engagement ring is not able to be returned. This may include the following:

If it is proving impossible to follow the first three rules of engagement ring return and every opportunity has been made to return the ring, other options must be considered. These options include:

While returning an engagement ring may prove to be a difficult and emotional task, it is better managed and significantly easier if the “rules of engagement” are followed.