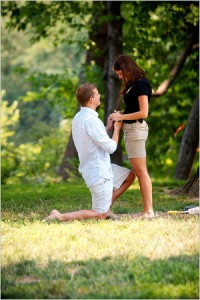 Hollywood often portrays engagements as being picture perfect and going off without a hitch. While every man wants to have a flawless plan when giving his girlfriend a diamond engagement ring, things do not always go according to plan! Keep reading to find out about some awkward and interesting engagement stories.

When a Long Island teacher had the idea to propose to his girlfriend on the Brooklyn Bridge, he thought he would be creating a show-stopping engagement story. Little did he know that it would literally stop traffic when he accidentally dropped it into the traffic below. While climbing down the bridge to find the engagement ring, motorists began stopping when they assumed he was trying to take his own life. Fortunately he and his girlfriend were able to explain the situation and after a lengthy hunt, the prized ring was found.  The damage was minor, considering it had been run over by several cars and the proposal continued–albeit slightly off course.

Recently in London the story is told about a young man who thought he had a brilliant and creative proposal. He placed a diamond engagement ring into a balloon filled with helium. While accompanying his girlfriend around Hyde Park (with balloons in tow), he accidentally let go of the strings. He and his fiance watched helplessly as the balloon carrying a $10,000 platinum diamond engagement ring floated off into the distance. After extensive searching and getting the media involved, the ring was pronounced as being lost forever. Some say the wedding continued with a simple gold band, others say the girlfriend refused to marry him until the ring was found. Either way, it is the perfect example of not quite thinking through a proposal!

A Broken Heart and a Diamond Engagement Ring

While many proposals are successful, there are the unfortunate instances where a young man is turned down and left with an expensive, non-refundable engagement ring. What is a man to do with a piece of unused jewelry at Christmastime? One thoughtful Bostonian felt that the best thing he could do is gift it anonymously to an unsuspecting person. He found an unlocked car at a department store parking lot and left the engagement ring with a note which said, “Thank you for leaving your car unlocked. Instead of stealing your car, I decided to give you something to brighten your Christmas season. I hope you can give it to someone you love, since I am no longer able to give it to my love. Have a very merry Christmas and happy New Year.”

Proposing with an engagement ring can be a joyful, awkward or stressful situation, depending on the circumstance. Although things do not always go as hoped or planned, there will always be a story to share for years to come. Take time to plan out the details of the proposal while making a point to think of things that could go wrong before the actual proposal to prevent a possible unfortunate situation.