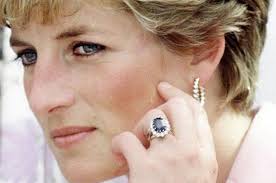 Princess Diana was born July 1, 1961 near Sandringham, England. Daughter of Edward John Spencer, Viscount Althorp and Frances Ruth Burk Roche. Growing up she was known to be very shy although very fascinated with music and dancing. Diana was reportedly played with the British royal family when she was young with Prince Edward and her family at a Park House owned by Queen Elizabeth II. She became Lady Diana Spencer after her father inherited the title of earl spencer in 1975. She went to Riddlesworth Hall and then attended a boarding school at West Heath School.

Diana and Prince Charles had the conversation that was said to be the start of their romance, during a barbeque at his parents’ house in Petworth. After that, the Prince and Diana are seen more and more on each other’s company. During one of their fishing trips, they caught the attention of the paparazzi. She tried to hide from them using her scarf but her anonymity had lasted only for a week. After that she was followed by the photographers everywhere. After countless days of spending time together the media screamed about the declaration: Is she the one? January 1981, when Diana was spending time with mother and step father in Australia and Prince Charles was at his ski resort in Kloster, he phoned her telling that after his return, there would be something important that he must ask. On February 6, Prince Charles ask Diana to marry her and she said yes.

Diana’s choice of ring resulted to a lot of impression. It is neither custom made or unique, it was at that time featured at Garrard’s jewelry collection, readily accessible to the public. It’s even termed to after as the “Commoner’s Sapphire” by her son Prince William. Some say that Diana chose the ring because it reminded her of her mother’s engagement ring. Somebody even came up with a story that Diana selected the ring because it’s the biggest, but she said that it was definitely not the biggest but she simply picked it because it was beautiful. On July 29, 1981 the couple got married which turned out to be the wedding of the century.

Her engagement ring consists of 14 diamonds surrounding a 12-carat oval blue Ceylon sapphire set in 18-karat white gold. It was created by jeweler Garrard and cost at the time, 28,000 pounds sterling. Garrard & Co. Limited formerly Asprey & Garrard Limited designs and manufactures luxury jewellery and silver. George Wickes founded Garrard in London in 1735. Garrard is headquartered at Albemarle Street in Mayfair, London. Garrard also has a presence in Harrods, London, Geneva, Lebanon, Qatar Dubai, Moscow and Hong Kong. Garrard was the Crown Jeweller of the UK, charged with the upkeep of the British Crown Jewels, from 1843 to 2007. In 1843, Queen Victoria appointed Garrard to the position of Crown Jewellers, leading to the production of numerous pieces of silverware and jewellery for the Royal Family, as well as the upkeep of the Crown Jewels. The company has dealt with a number of famous jewels, such as the Cullinan diamonds (including Cullinan I, “The Great Star of Africa”), and created such pieces as the Imperial Crown of India in 1911, the crown of Queen Mary for her coronation, and the Crown of Queen Elizabeth in 1937. In 1852, Garrard were given the responsibility of re-cutting the famous Koh-i-Noor diamond into a brilliant.

Unfortunately, the fairy tale wedding of Prince Charles and Princess Diana did not lead to a happily ever after. There were reports of infidelities on both parties. In December 1992, the couple’s separation was announced by the British Prime Minister John Major, and the divorced was finalized in 1996.Even after the divorce Diana was seen wearing the ring. She did not escape the eyes of the photographers as well. The role of the photographers was also studied when she got involve in an accident which took away her life. Diana was involved in a car crash while trying to get away from the photographers on the night of August 30, 1997. The sudden death of Princess Diana shocked the world. Princes William and Harry was asked to collect their mother possession and Prince Harry selected the engagement ring while Prince William took the yellow gold Cartier Tank Francaise Watch, telling his brother that the future Queen should wear her mother’s engagement ring.

Just when we thought that the world has forgotten about the ring, on October 2012 Prince William and his long-time girlfriend while on a trip to Kenya, William took the ring with them and carry it around his “rucksack” for 3 weeks before he finally propose to Kate Middleton. The media was frantic about what the engagement ring would look like until they saw the familiar 18-carat oval sapphire surrounded by diamonds that was once belong to Princess Diana. Even if it was negatively viewed as tragic symbol of Diana’s marriage to Prince Charles, he gave it to his fiancé as a way of “keeping her sort of close to the engagement. “

Once the media learned about Kate’s Engagement ring, everybody wants a piece of it. Jewellers around the world started making replicas of the famous engagement ring, simply because everybody in their 20’s wants to be like Kate. It is one of the most famous rings in the world. There was a surprisingly 300% rise in sales of the rings replica after it was shown to the public. In 1981, when Prince Charles bought it for Princess Diana it cost around£28,000. Now that Kate bought it back to the public’s eye and due to its significance it is now worth three times more than Queen Elizabeth’s II engagement ring. The cost of Kate’s engagement ring is now £300,000. It also top the list of the world’s 20 most famous engagement ring in the world.