Gemstones also referred to as gems, are both valuable and semi-precious stones. They argue that beauty is a subjective concept. The adage holds true in the case of jewels. Gemstones are not only gorgeous, but they are also costly. These rare jewels are frequently meticulously crafted and can cost a fortune. Indeed, the list of valuable stones would almost definitely be endless if we went through all of them throughout time, as humanity’s fascination with jewels extends back to prehistory.

Our forebears used gems to treat physical ailments and fight off bad spirits. Over time, each gemstone developed its own set of distinct characteristics that added to the stone’s significance. Wearing certain diamonds can influence several parts of life, including love, stress, grounding, mental clarity, and even abundance. Gemstones are now recognized for their metaphysical properties, which aid in the connection between our human consciousness and our spiritual self. 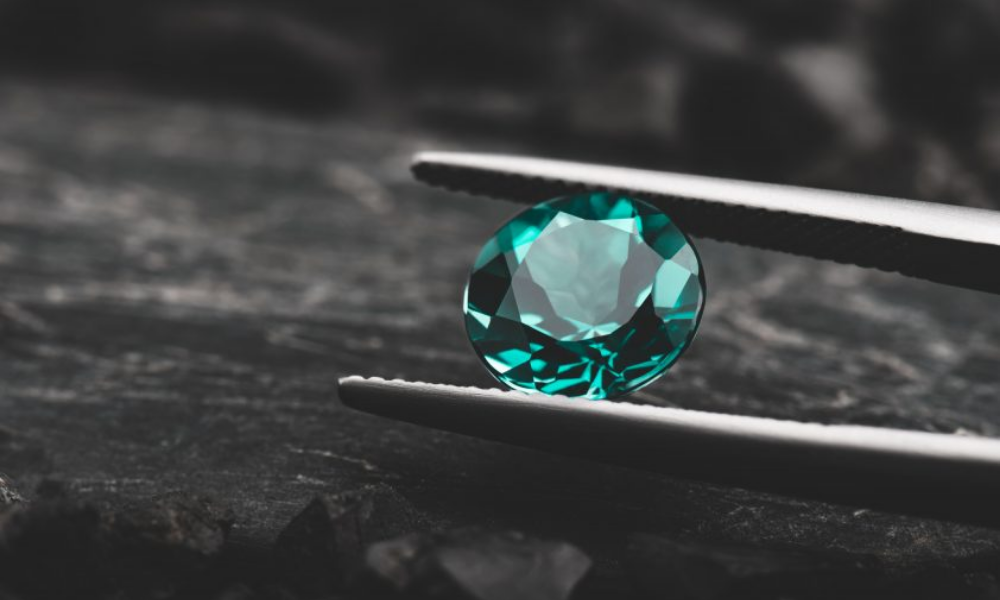 A gemstone is a chunk of mineral (or other stone or organic substance) that has been cut and processed into jewelry or another item after being cut and polished. Although minerals are usually used to make gemstones, other materials such as jet or amber, as well as rocks such as lapis lazuli, can also be used. The bulk of gemstones is hard to the touch, although some soft minerals may be used depending on the style of jewelry being manufactured.

Even though the greater part of gemstones is generated beneath the earth’s surface, the individual gems can be created in a variety of methods. Many of these jewels are formed when minerals are exposed to water located close beneath the earth’s surface, and the minerals subsequently dissolve. Minerals such as opals, agates, and amethysts form as the solution cools or evaporates, allowing for the formation of gemstones such as opals, agates, and amethysts.

When water combines with copper-rich minerals, gems such as malachite, azurite, and turquoise are created. Turquoise stones have a long and illustrious history, mostly with ancient Egyptians considering them to be exceedingly valuable. Turquoise stones have been existing for at least 4,000 years, perhaps even longer!

The Most Expensive Gemstones That Money Can Buy

Even though diamonds are among the most valuable items on the planet, there are a number of gemstones that are more difficult to come by than diamonds. The following are amongst the rarest gemstones:

Only three painite crystals of the dark red, garnet-like jewel, brownish red-orange gemstone had been discovered in 2001. Many more samples of this deep red gemstone have been discovered since then, but the material remains extremely scarce. Myanmar is the only place on earth where you may find paints. Over a thousand stones and bits have been recovered so far, although the majority of it isn’t usable.

Alexandrite is a color-change variation of the mineral chrysoberyl that is often described as “emerald by day, ruby by night.” It was first discovered in the Ural Mountains of Russia in the 1830s and is presently available in East Africa, Sri Lanka, and Brazil, although quality material is extremely uncommon and precious. However, natural alexandrite is extremely rare and expensive, and only a few people have ever seen one. This gem-quality chrysoberyl type is ideal for jewelry.

Tanzanite has quickly gained popularity among jewelers and gem collectors. This translucent zoisite type gets a stable, gorgeous blue to violet color with heat treatments while being normally reddish-brown. Tanzanites with more blue are generally more valuable than those with more violet. The best colors are those that are medium-dark. Tanzanites exhibit pleochroism as well as dramatic color change. Tanzanites can appear virtually sapphire blue in natural light. They may seem violet or amethyst-like in fluorescent light. When viewed via each of the three crystal axes, these gems can reveal red-violet, blue, and yellow-green colors.

Benitoite is one of the most appealing of all rare gems, with a dispersion larger than diamond and a sapphire-blue body hue. In only San Benito County, California, have gem-quality crystals been discovered? This jewel is pretty pricey. Benitoite’s occasionally vivid blue color usually hides its high dispersion, which can generate red and green flashes in the stone. The stone’s rarity, on the other hand, keeps it hidden from the general populace, who are usually unaware of its existence. When it comes to cutting this uncommon stone, however, consumers must choose between body color and dispersion. While some enthusiasts like a deeper blue stone with less dispersion, others prefer a lighter stone with much more visible dispersion.

Poudretteite is among the most sought-after gemstones. It was titled after the Poudrette household, who owned and operated a quarry at Mont Saint-Hilaire, Quebec, where the mineral was discovered for the first time. In Mogok, Burma, in the year 2000, the first known gem-quality crystal of poudretteite was discovered. The extraordinary 9.41-carat poudretteite gem displayed here, from Burma, is one of the biggest, if not the world’s biggest, faceted poudretteite gems ever discovered. It’s incredible that one of the world’s rarest minerals should come on the gem market as a 9.41-carat pale pink/colorless gem with nearly immaculate clarity.

The color of grandidierite ranges from bluish-green to greenish-blue, with its blue hue rising as the iron level rises. It is quite robust, making it appropriate for use in jewelry (when available), but it is hard to manufacture jewelry-worthy polished stones because it has good cleavage in both directions. There has been relatively little gem-quality grandidierite discovered since its identification more than a century ago, and much of what has been unearthed is translucent. Grandidierite is still extremely rare, despite the abundance of sources; pockets tend to be relatively small and quickly depleted.

Grandidierite is a very unusual mineral that was discovered in southern Madagascar in 1902. The mineral was named after French explorer Alfred Grandidier (1836–1922), who researched Madagascar’s natural history. The most straightforward way to tell if your crystal is grandidierite is to look at it. Grandidierite is an incredible stone. They have a high degree of trichroic pleochroism. This means that depending on the observing position, it can show three various colors: dark blue-green, colorless (often a very pale yellow), or dark green. Soft neon-blue grandidierite, on the other hand, is extremely rare.

Although pleochroism helps identify grandidierite from other gemstones, lazulites also have blue-green colors and display colorless/blue/dark blue pleochroism. Grandidierites can also be cabbed and, on rare occasions, faceted. Lazulites, on the other hand, have slightly greater refractive indices (RI) and specific gravity (SG). Grandidierites are also harder than other minerals. Remember that scratch hardness tests should only be performed as the last step for identifying rough, so don’t try this on a finished gem.

The stone is prized for its beauty, but it also has powerful psychic properties. This gemstone’s color is said to correspond to the throat chakra in yogic philosophy. It facilitates the development of expression, communication, and intuition. Faith, patience, trust, and reverence are also related to it. This mineral has long been thought to aid in the maintenance of a healthy cardiovascular system and blood flow. It also boosts the immune system of the person. The vibrations of these green gemstones are said to help you make better decisions. Grandidierite is thought to influence the wearer’s confidence, inner strength, and capacity to think logically and clearly as iron is one of the stone’s components.

Where Are Grandidierite Gems Found?

Cap Andrahomana, the type locality in southern Madagascar, was the only renowned supplier of gem-quality material for many years. Transparent, gem-quality grandidierites have been discovered at Tranomaro, which is also near Cap Andrahomana. Gem-quality material has also been generated in Sri Lanka’s Kolonne district.Some other sites are New York and Wyoming in United States, and a few other countries likeMalawi; Repanga Island, New Zealand; Czech Republic; India;Norway; Slovakia;Algeria; Antarctica;Italy;Suriname.

Grandidierite has been synthesized for purposes such as studying the recently discovered ominelite and the prevalence of werdingite in pegmatites. This synthetic material, on the other hand, has never been used in jewelry. (Perhaps it might change when grandidierites gain in popularity.)

Would You Say Grandidierites Are Budget-Friendly?

Grandidierite is one of the most uncommon minerals on the planet. It is, in fact, one of the world’s top ten rarest gemstones. It is very rare to find gem-quality Grandidierite, and thus it is the 3rd most expensive gemstone in the world. In spite of the grandidierite’s rarity, it continues to be popular and is becoming more affordable each year. The most reliable source is southern Madagascar, where it is found exclusively.

In the United States, Grandidierite is used primarily for earrings and rings. It is hard to cut and polish, so it is quite expensive. The highest quality material comes from southern Madagascar. Although Grandidierite can be found all over the world, it is very rare. The quality stone will be worth its weight in gold or platinum. In addition to the stunning look, the gemstone is very durable in a jewelry set.

Would A Grandidierite Gemstone Be Fragile Or Delicate, Or Durable?

The Mohs scale for mineral hardness is a subjective scale that ranges from 1 to 10, describing the scratch resistance of distinct minerals based on the ability of tougher materials to scratch softer materials. Despite the fact that grandidierite is an extremely rare gemstone, it is also extremely durable. Its Mohs hardness is 7.5, making it a great choice for jewelry.

This stone is a soft mineral, so it can easily be cleaned with a steamer or ultrasonic cleaner. It is best advised to avoid harsh chemicals or household detergents on grandidierite. If you want to own a piece of Grandidierite, you will have to pay top dollar to get it. It is a very expensive stone, so you must know the best way to care for it. If you do have to clean your stone, always rinse it thoroughly to remove any soap residue.

Grandidierite are durable enough to work in any jewelry setting, however, some stones may have crystals of other gem minerals embedded in them. They may be more susceptible to blows and chipping because of their cleavage and brittle toughness. For these reasons, use a soft brush, light detergent, and warm water instead of machine cleaning methods.

Gemstones have traditionally been examined and valued solely by sight. The four C’s, or color, clarity, cut, and carat, are the four most significant factors to consider while inspecting a gemstone. The third most expensive gemstone is grandiderite. It is extremely appealing, despite its rarity. One of its most distinguishing features is its blue-green tint. It is a less valued stone since it is opaque. If you’re unsure about the clarity of your Grandidierite, independent gemological labs can help. A scratch test is a simple way to tell if your gemstone is grandidierite or not.