Many people wonder what makes a mineral a gemstone, and if you are one of them, you’ve probably asked yourself the same question: what makes a mineral a gemstone? This question is quite simple: crystals are created when water and minerals come together in a particular location. The water that comes from rain can dissolve the minerals and create new gemstones. For example, a crystal of quartz can form when water combines with silica. The two minerals then stack to form the gemstone.

Some minerals, however, are resistant to weathering. Many gemstones have high specific gravity, making them easier to mine. These minerals may have formed in the mantle of the earth, and a mineral may be resistant to chemical weathering to survive a large amount of weathering. Hence, gems can be found in alluvial deposits such as stream beds and beach sands. 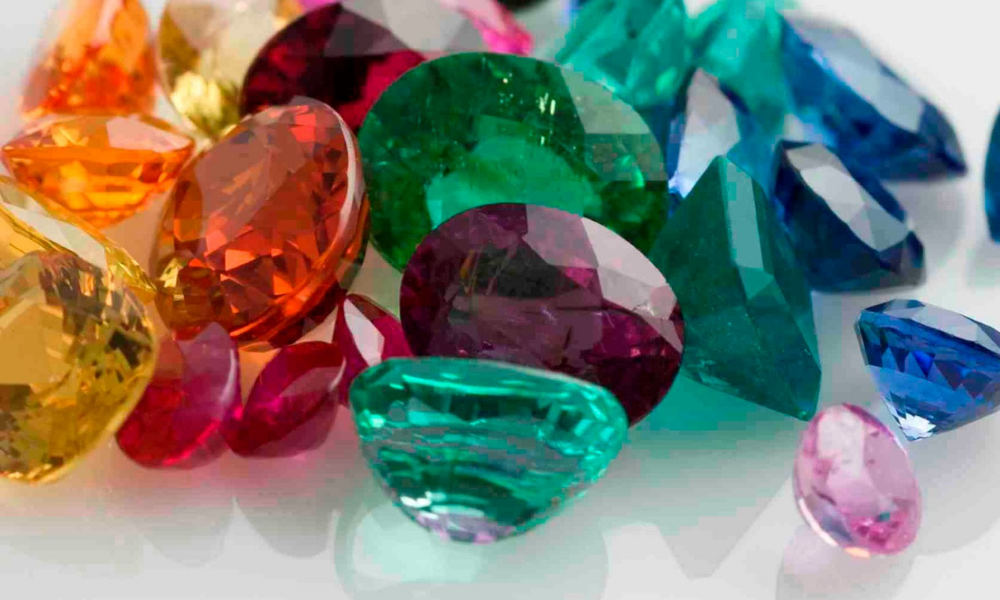 As previously said, diamonds appear colored because the material’s structure absorbs some white light. Most gems are colored by a few metals that are either impurities in Allochromatic gems or critical parts of the atomic structure in Idiochromatic gems. Chromium, Iron, Manganese, Titanium, and Copper are the most frequent minerals affecting the color.

Chromium is responsible for Ruby’s vivid red and Emerald’s dazzling green. Iron is responsible for the faint red, blue, and yellow colors in Garnet, Spinel, Sapphire, Peridot, and Chrysoberyl. Titanium and Iron color the best Sapphires, while copper gives Turquoise and Malachite their blue and green hues, and Manganese gives Rhodonite its pink hue.

Some minerals produce multiple gem types. This is because the impurity, which is merely a trace amount, is not always the same and might even be a mix of impurities. The color will be affected by the interaction of the impurities with the atomic structure.

For example, the mineral Corundum (Aluminum Oxide) is colorless in its pure form. Still, if it contains Chromium, it turns a rich red color like Ruby, and if it has Titanium, it turns a deep blue color like Sapphire. The mineral Beryl comes in various colors, including aquamarine and emerald, as well as orange, yellow, and green.

Quartz has an incredible range of colors, patterns, and optical effects that no other gem can match — purple quartz is Amethyst, yellow quartz is Citrine, brown quartz is Smoky Quartz (Cairngorm), and pink quartz is Rose Quartz. Quartz stones such as agate, tiger eye, and aventurine have various exciting effects and colors.

What is a Difference Between Gemstone and Mineral?

A gemstone is a mineral that has formed crystals and has been professionally cut and polished to be used in jewelry. Gemology is the science of jewels. This is a form of mineralogy (the study of minerals) that focuses on the physical qualities of a stone that can be viewed with the naked eye and magnified. The value of a gemstone is determined by a gemologist, an expert in the field of gemology. It is usually a decorative and excellent stone and is highly costly.

Gemstones’ hardness, size, and rarity are frequently used to determine their value. Unpolished gemstones resemble common rocks; however, cutting and polishing give them brilliance and, in some cases, color (which adds to their value) that is not found in other types of stones. Semiprecious and precious stones are the two types of gemstones. Amethyst, garnet, Chinoise, and opal arSapphire e semiprecious gemstones. Diamond, emeralds, ruby, and sapphires are examples of precious solid formations that occur naturally despite their rarity on the earth’s surface, and their crystalline structure and form distinguish them. When magma, which is molten rock, cools, they form, and water in caverns beneath the sea can also form them. Minerals are typically found between sediments or in regions where lava flows have occurred. There are almost 4,000 different minerals that occur naturally on the earth, each with its crystal structure.

Minerals are mined for a variety of purposes. Some are mined just for their look, while others may have a specific necessity for the various elements they contain. Minerals of new sorts are discovered regularly under the earth’s surface.

Minerals are crystals that are found in many rocks and gemstones. Gemstones are mainly minerals (but occasionally rocks) that humans place a higher value on and that jewelers may transform into something beautiful. And rocks are made up of various minerals, with hundreds upon thousands of various varieties.

You might believe that time would be more than enough for crystal formation in geological terms. However, pathways frequently open and close in this chaotic environment. When crystals begin to form, the tube feeding the cavity with mineral-rich fluid closes, and all growth comes to a halt at this moment.

Growth will resume if the route reopens. This on-and-off growth pattern is usually unnoticeable in a crystal, and it does have notable effects in some circumstances.

Occasionally, the chemical compositions of consecutive stages of growth will alter somewhat, and color zoning may appear in the crystal due to this.

Occasionally, the new layers will be oriented differently. Twinning is the result of this.

How are Gemstones Classified?

As predicted, Precious and semi-precious stones can be classed based on their origin and properties. Mineral inorganic stones, organic stones, and mineraloids are the natural classifications. Let’s have a look at what each of them has to offer:

Organic gemstones are gemstones that aren’t classified as minerals, and this is because a live being’s biological action generated them. For example, amber is a stone formed by freezing resin from ancient trees over many years. This type of gemstone is, as you might assume, far more valuable than the more common ones. And it takes thousands upon thousands of years for the resin to crystallize in this manner. Another example of an organic gemstone is pearl, and it was generated as a result of oysters’ biological activity.

Mineraloid gemstones are materials that do not have a crystalline structure or a well-defined chemical makeup yet are not minerals. The group of opals and obsidians can be found here.

What are the Properties and Characteristics of Gemstones?

The shape and color of something give it beauty, and it also has to do with brightness or transparency. It is necessary to put a chemical in a gemstone to have a high level of attractiveness, and it is critical to make it appealing to the buyer’s list.

Durability refers to the ability to withstand being scratched by another person and any blow or pressure. You can also see how resistant this material is to various substances and how much use it gets daily.

Color is possibly the most critical feature if you want a high value. Those with brilliant green, red, and blue colors are among the most sought-after jewels, and white, translucent, and black are the least desired colors. I also have to consider each person’s individual preferences.

The capacity to reflect light off their faces or surfaces is called brightness. They’re usually found in the reflection, refraction, scattering, and faceting of light from the surroundings. A gemstone that can enable light to penetrate the crystal is considered an excellent grade. The more opaque it is, the less it will cost and be sold for.

Is it True that All Gemstones are Minerals?

Most gems are minerals, although others, such as pearls and amber, are organic. Living creatures make these materials. A mineral must be generated inside the Earth by definition. As a result, pearls belong to a different category. (To further confuse matters, a pearl’s covering is a mineral, even though pearls are formed within a mollusk.)

Similarly, amber originated as tree sap, and after millions of years, it evolved into a polymer, a natural plastic. Amber has been recognized as a gem for thousands of years, even though it is not a mineral.

How Long do Gemstones Last?

Durability is frequently a top priority for gemstone consumers. However, two well-known jewels are exceptionally fragile. Because of their suppleness, pearls can last a century as jewelry stones. The simple act of brushing away dust will gradually erode their protective layer. Perfumes and hairspray can taint and damage pearls as well. Pearls, especially for engagement rings, require safe settings as ring stones.

Opals have long been prized for their beauty, yet they are notoriously fragile. They dry out and crack as they lose their high water content. Even the tiniest bump might cause them to break. They’re also susceptible to temperature variations. One of my customers had a valuable opal brooch in a secure setting. As she walked out of a Christmas party one night, the opal fractured with an audible crack as she transitioned from the warmth of the inside to the chilly winter night. Many people have cried over opals, which has led to the notion that opals bring bad luck.

What makes a mineral a gemstone? A mineral’s hardness is qualities that distinguish it from other materials. It is also resistant to abrasion, fracturing, and chemical reactions. Some minerals are too soft to scratch, so they are given semi-precious status. However, most minerals are stable, challenging, and have high refraction values. Moreover, the rarity of gemstones determines their value.

Some minerals undergo metamorphic changes, where their chemistry changes. Some minerals retain their characteristic crystal habits, while others change without recrystallizing. Pseudomorphs are unique minerals, and they are formed due to the atom-by-atom replacement of one mineral with another. For example, quartz replaces crocidolite but retains the fibrous structure. Similarly, marcasite can pseudomorph into fluorite, pyrite, or goethite.